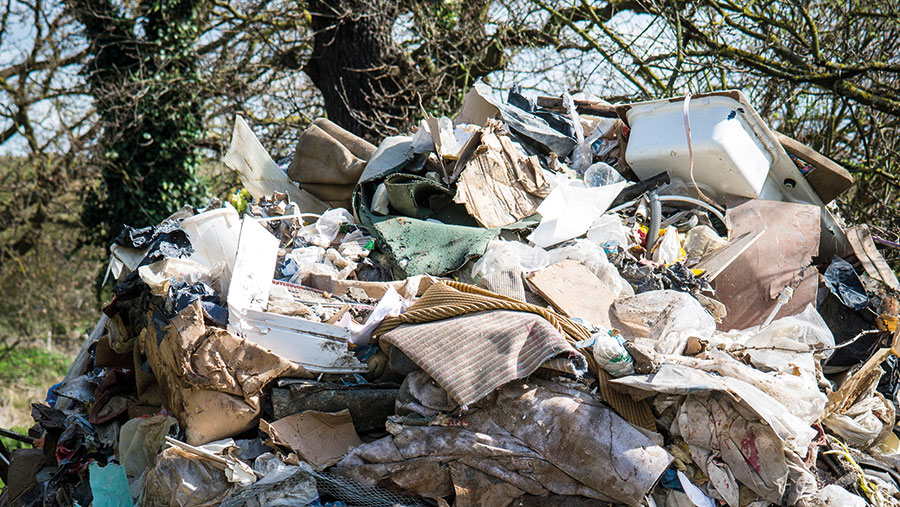 Seizing vehicles must become the default penalty for fly-tipping as part of tougher punishments for waste crime.

That is one of a number of proposals on how to deal with fly-tipping, put forward by the Country Land and Business Association (CLA) ahead of the bank holiday weekend – a time when there can be a surge of illegally-dumped waste across rural Britain.

The organisation, which represents landowners, farmers and rural businesses, has launched a five-point action plan designed to tackle the scourge of fly-tipping blighting the countryside (see ‘Tackling the blight of fly-tipping – the CLA’s five point plan’, below).

As well as seizing vehicles, the CLA recommends enforcing fines and appointing a fly-tipping “tsar” to co-ordinate national agencies.

A survey conducted by Farmers Weekly in partnership with CLA Insurance as part of our Stop the Blot campaign revealed almost two-thirds of farmers and landowners have been affected by fly-tipping and more than half agreed it is a significant issue in their area.

But there is also a common belief that, all too often, the punishments do not fit the crime.

CLA president Ross Murray said: “Fly-tipping is not a victimless crime. Private landowners are fed up of clearing away other people’s rubbish and paying for the privilege.

“If they don’t act, they risk prosecution for illegal storage of waste which is simply not fair.

“It’s not just the odd bin bag that is being fly-tipped, but tonnes of hazardous waste, mattresses being set alight in woodland and even a dead horse dumped on private land because the perpetrators know they can get away with it.”

Mr Murray says there is a clear need for tougher penalties which act as a true deterrent.

Seizing vehicles involved in fly-tipping and imposing and enforcing penalties which better reflect the seriousness of the crime is vital, he says.

“Only through co-ordinated and collective effort can we push back against this scourge that is damaging our countryside and rural economy.”

The facts about fly-tipping in Britain

Counting the cost on a family estate

George Winn-Darley owns Aldby Park country estate at Buttercrambe near Stamford Bridge in the north East Riding of Yorkshire which suffers from multiple incidents of fly-tipping each year.

In January, his team spent a total of 46 man hours removing two tractor-trailer-loads of fly-tipped waste along road verges at a total cost of about £800. 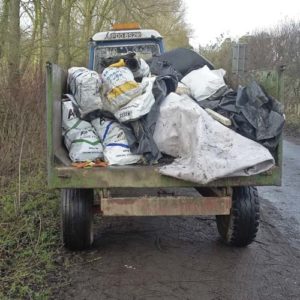 “Local authorities need to crack down hard by increasing fines, seizing vehicles and even imprisonment.”

Mr Winn-Darley said it is more expensive for the victim to remove the fly-tipped waste than the fixed penalty notice imposed on the perpetrator, as more than 80% of these are for £500 or less.

“My personal bugbear is that of littering,” he added. “It would be really great if high street fast food chains took responsibility for educating their customers on the appropriate ways in which to dispose of their rubbish.”

1. Impose and enforce penalties which better reflect the seriousness of the crime – seizure of vehicles must be the default penalty to send a clear signal that criminals will face damaging consequences if they are caught fly-tipping.

2. Enforce fines for home and business owners whose waste is found in fly-tipped locations – to act as a deterrent and encourage waste disposal through legal channels.

3. Appoint a national “fly-tipping tsar” – whose responsibilities would include co-ordinating with national agencies to tackle organised criminal gangs, monitoring and reporting on the scale of the problem across public and private land, and benchmarking enforcement performance.

4. Develop new ways to aid clear up and support victims, such as a new scheme to allow any private landowner to dispose of fly-tipped waste free of charge, and removing the landowner’s liability to clear up waste on private land.

5. Promote education and working in partnership, but sharing best practice and advising landowners on how to reduce the chance of being a victim of fly-tipping. Examples of local partnerships include shared CCTV monitoring schemes, Countryside Watch and incident intelligence sharing, which should be showcased.