Council chiefs say January is among the worst months for fly-tipping, with rogue traders and residents dumping post-festive waste across the countryside.

That’s why several councils across the country launched pre-Christmas crackdowns on fly-tipping to warn of the penalties for waste crime.

As part of our Stop the Blot campaign (see below), Farmers Weekly examines fly-tipping incidents that have already taken place in rural areas over the festive period and early new year to highlight the ongoing problem of this rural waste epidemic.

Taxpayers had to cough up £58m to clear more than 1m incidents of fly-tipping in England during 2016-17 – a 7% increase from the previous year.

But the Defra figures do not include the majority of incidents of waste illegally dumped on private land, which landowners are liable for and have to pay to clear up at an average cost of about £1,000.

The Country Land and Business Association (CLA) is encouraging farmers and landowners to report waste dumped illegally in gateways, fields and hedgerows.

CLA president Tim Breitmeyer said: “Fly-tipping is not a victimless crime. It affects almost two-thirds of private landowners and blights the countryside.

“We are fed up of clearing away other people’s rubbish and paying for the privilege.” 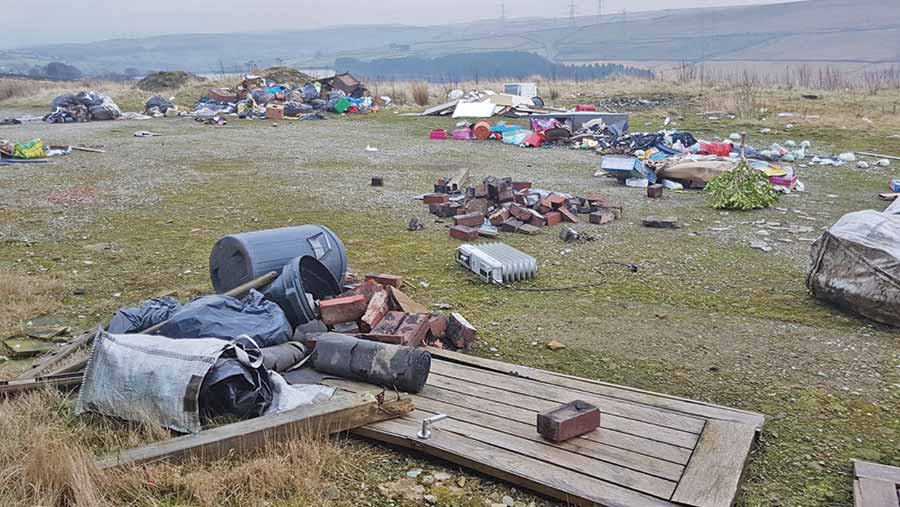 Beef and sheep farmers Stephen and Rachel Hallos say they have nowhere to turn for help to clear a fly-tipping eyesore.

Their son Sam, 21, discovered the monstrosity after he went to spread manure on a field. He filmed the site and aired the video on Twitter (@rachelhallos).

The waste is next to a dilapidated barn, owned by a private landowner who is on the run from police.

But the wind is blowing the detritus into neighbouring fields farmed by the Hallos family, including a hay meadow under a Higher Level Stewardship (HLS) agreement to restore wildlife.

“It’s not the responsibility of our landowner, Yorkshire Water, or us to clear this rubbish,” said Mrs Hallos. “The council say it’s not their responsibility either, as the waste is on private land. We don’t know who to turn to.”

CLA director North Dorothy Fairburn said: “It’s disgusting to see our rural landscapes being blighted by the reckless actions of, to be frank, criminals.” 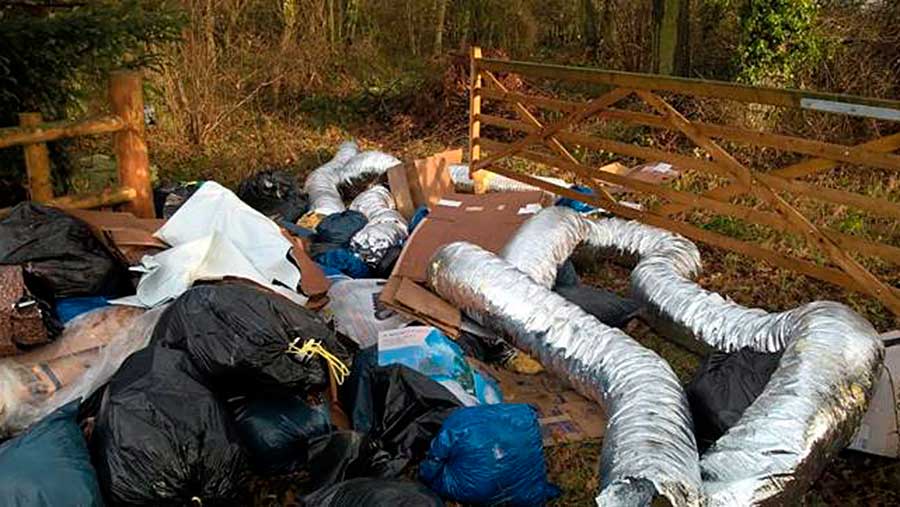 James Nason, owner of the 404ha dairy, sheep and arable estate near Shrewsbury, said waste criminals broke a lock on a farm gate and dumped the rubbish in woodland and on the roadside.

Because most of the rubbish was on the highway, the council agreed to clear it.

“Our land agents, Strutt & Parker, were heavily involved in reporting the incident to the authorities. It also cost us valuable time,” said Mr Nason.

“It was sad that tourists staying with us, or in the area over Christmas, had to see this waste. We cannot let our beautiful countryside become a fly-tipping haven.”

Hertfordshire farmer Stuart Roberts was faced with this fly-tipping roadblock early in the new year.

Mr Roberts said he got up early to deliver eggs door-to-door on Tuesday (9 January) when he was confronted by this wall of rubbish strewn across a country lane near Hammonds End Farm, Harpenden.

“The last thing I needed at 5.30am was to see this rubbish tipped in the middle of the road,” he said.

“It resulted in a seven-mile round trip and cost me an extra 20 minutes.”

Cereal and beef farmer Mr Roberts, who has a small-scale poultry business, reported the waste crime to his council. 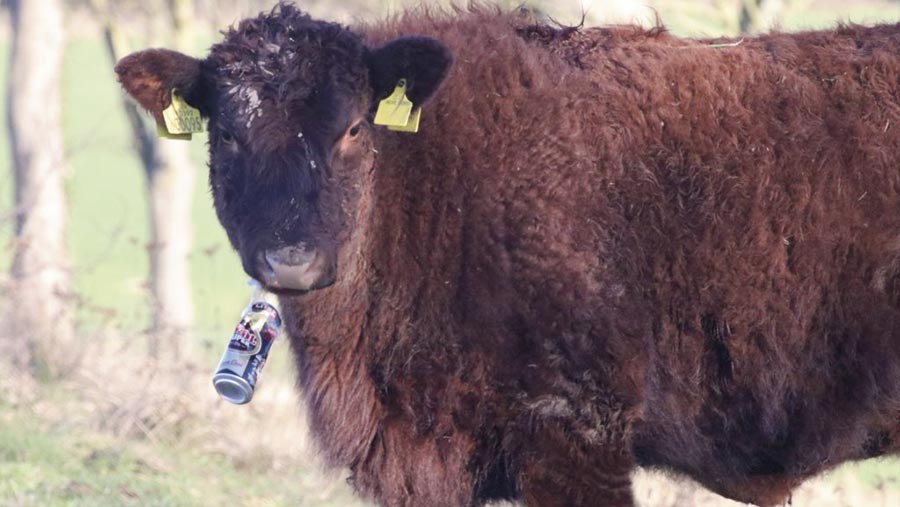 This shocking image of a heifer chewing on a plastic beer can ring demonstrates the seriousness of fly-tipping and the risk it can pose to cattle.

The incident took place on Sunday 7 January near a picnic area at East Lighthouse, Sutton Bridge, Lincolnshire, on land where cattle graze.

Some of the beer cans had also been shredded before being dumped and there were glass bottles, which could have also caused serious injury.

Landowner Stafford Proctor, who is a member of the CLA Lincolnshire Committee, said it was another example of people showing complete disregard for the countryside.

He added: “The plastic around the beer cans could easily have been swallowed by our cattle, which could have caused choking or even a fatality.” 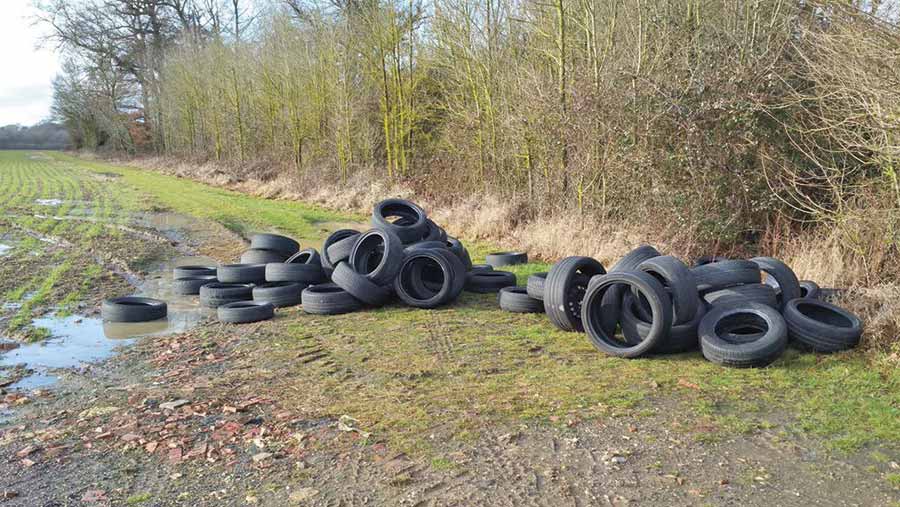 Unscrupulous fly-tippers dumped a heap of used car tyres on land in the heart of the north Essex countryside.

About 100 tyres were thrown in a field of emerging autumn-sown cereals on and beside a public footpath at Pattiswick Hall Farms overnight on 28 December.

The tyres were dumped mainly on a public footpath, so Braintree Council agreed to remove them.

PC Andy Long, a rural and crime heritage officer at Essex Police, posted a photo of the tyres on his Twitter account (@PcAndyLong). He said: “More disregard for the countryside near Pattiswick.” 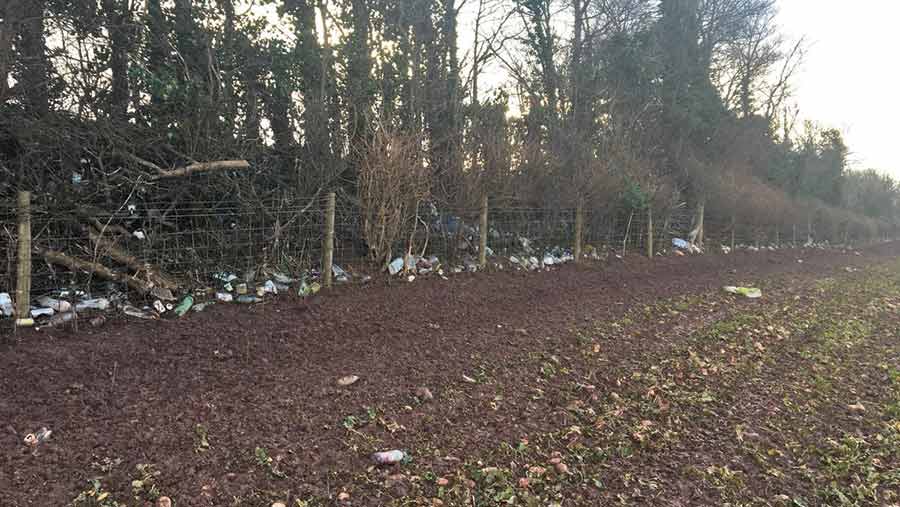 This family farm business in the Wye Valley regularly has to remove waste thrown from a lay-by on the A40 road next to this field, which has livestock grazing in.

There are bins in the lay-by provided by Herefordshire District Council, which are often full due to irregular emptying.

But even when the bins are empty motorists decide they cannot be bothered to leave the comfort of their own vehicles to dispose of their own rubbish.

“It’s a criminal offence, yet that doesn’t seem to bother those who do it,” said a spokesman for Flanesford Farm. “This is not the way to treat our countryside or planet.” 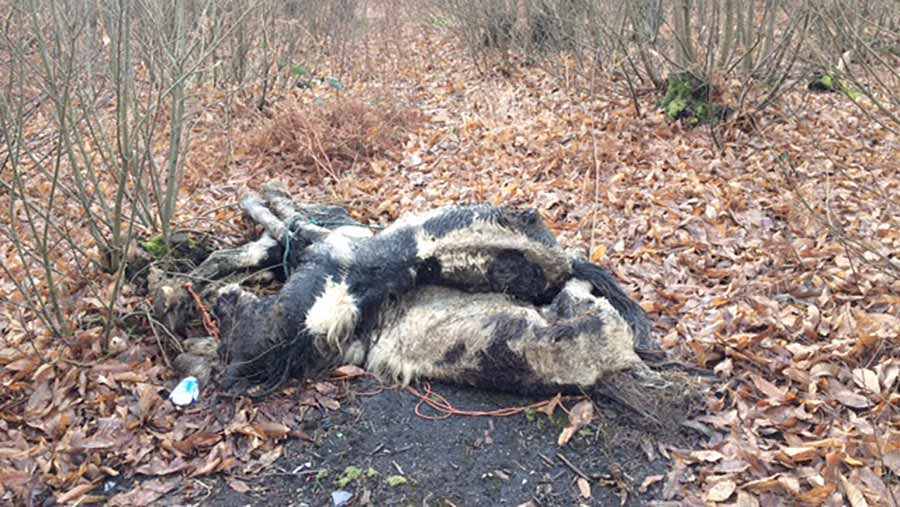 The piebald ponies, which were not tagged, were discovered at the end of a track in woodland on 4 January.

Shocked landowner Rachel Halley said: “It just makes you feel sick in the stomach to think what happened to these poor ponies. It’s absolutely horrific. How could anyone do this?”

Old kitchen cabinets, carpets and even an old garden shed were among the items dumped in St Lythans in mid December.

Ms Reader had to hire a large skip to remove the waste, which was then taken back to her farmyard to sift through to ensure the waste did not include any hazardous materials.

The incident cost the farm about £600 which included labour and removal by a waste disposal company. “I was furious. I can’t believe how brazen these people are,” said Ms Reader.

It is a national disgrace that blights our countryside and causes a huge dent in the rural economy.

Farmers and landowners usually find a spike in incidents after every public holiday and as waste generally attracts more waste, once there is a fly-tipping hotspot more usually follows.

The Christmas and new year period is no time for farmers to relax and plan for the year ahead when they have the burden and expense of clearing up other people’s rubbish.

More and more fly-tipping cases are on an industrial-scale, particularly when the land is located on the fringes of urban areas. As these incidents show, it is large household items, building materials, hazardous waste and even deadstock being dumped across our countryside because the perpetrators know they can get away with it.

Part of the problem is the council fee putting people off lawful disposal at the local tip, but it is also businesses not complying with existing waste disposal regulations which can encourage organised crime.

Government action to help tackle this antisocial behaviour is essential. Defra’s consultation, published this week to fine households up to £400 if they pay an unauthorised waste carrier to take away rubbish and allow free disposal of DIY waste at council tips, goes some way to cracking down on the crime.

People would be more encouraged to do the right thing and dispose of their rubbish through proper legal channels if they see that fines are enforced.

The CLA will continue to highlight the issue of fly-tipping on private land until a reasonable and fair solution can be introduced to ensure clearing up other people’s rubbish is not the responsibility of the fly-tipped landowner.

Seven tips to reduce the risk of fly-tipping on farmland

If you see fly-tipping in progress, don’t approach the culprits, but take a note of the vehicle’s registration number and its description, the time and the location. You can report it to the police, since it’s a crime in progress, but if you don’t want to do that, at least tell the local council about it.