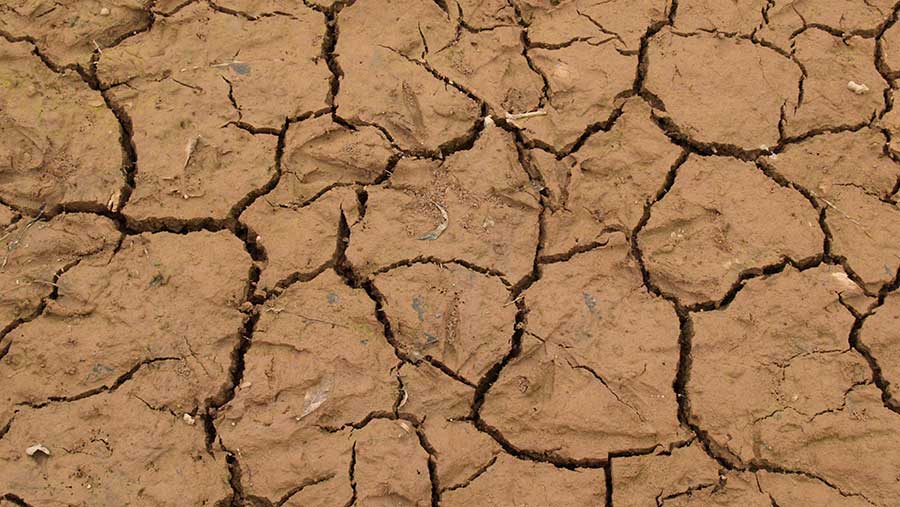 Lack of rain has seen farmers highlight the impact dry weather is having on crops across much of the UK.

The UK as a whole saw just 47% of the average April rainfall, says the Met Office.

Middlesex, Mid Lothian and Fife were the driest historical counties this month with just 12% of the rainfall expected during the month.

See also: Drought could slash crop yields by up to 50%

After one of the driest winters in 20 years, more than four-fifths of the country’s rivers have fallen to abnormally low levels, with growing concern of a severe drought.

The NFU says it is working closely with the Environment Agency, public water supply companies, Defra and the Met Office to assess the situation as this spell of dry weather continues.

NFU vice-president Guy Smith said: “The situation is patchy with farmers, particularly in the South and East, reporting as low as 10% of their expected March and April rainfall.

“While decent rains in May and June will put many crops back on track, some crops such as spring barley have clearly already lost their full potential.

The dry spring comes on the back of a dry winter in East Anglia.

The first 4 months of this year have produced only 36% of our long term average rainfall. 40% lower than the drought of 2011. #drought17

Some farmers are irrigating barley in a bid to save crops.

Two irrigators going saving our winter barley. No moisture at all, it's seriously dry on the sand! pic.twitter.com/VKpBHWyc2v

But other parts of the country have suffered too – including areas which usually receive more rain.

Somerset farmer James Winslade, who hit the headlines when his farm was flooded three years ago, took a TV camera crew to see parched fields.

@rupertevelyn ITN news filming today on the lack of rain and pressure on crops, we're not as bad as other parts of the country pic.twitter.com/yIwHVumycv

There is also lack of water at the site of next month’s Cereals event, which will be held at Boothby Graffoe, Lincolnshire.

Further north, it is the first time that sugar beet has been irrigated at Hall Farm, Eastoft.

I like a good sunny 😎summer like the next man but first for us irrigating sugar beet today thanks to good neighbour @williamgagg #dryspring pic.twitter.com/HSzZlm6Fcw

Meanwhile, further west, wheat is being irrigated in Herefordshire.

If this doesn't make it rain, nothing will!
Irrigating Wheat.
In May.
7 miles from Wales.
We've officially lost it! pic.twitter.com/MT87ewWWWl

In the drier South, spring wheat has emerged in Sussex – but could still do with a drink.

Spr wheat after cover crops, Sussex. Simtech vs Claydon drills. All emerged but needs a drink. Rain at end of week? @AgrovistaUK pic.twitter.com/FMuzpLmLAf

River beds have dried up in Cumbria.

April was the driest month ever recorded at Little Raith Farm, Kirkcaldy, Fife

As April gives way to May along goes the driest month I've ever recorded at LRF with it, a mere 6mm of rainfall for the month. #drought17

Has lack of rain affected your farm business? If so, call Johann Tasker at the Farmers Weekly newsdesk on 07967 634 971 or email johann.tasker@rbi.co.uk.