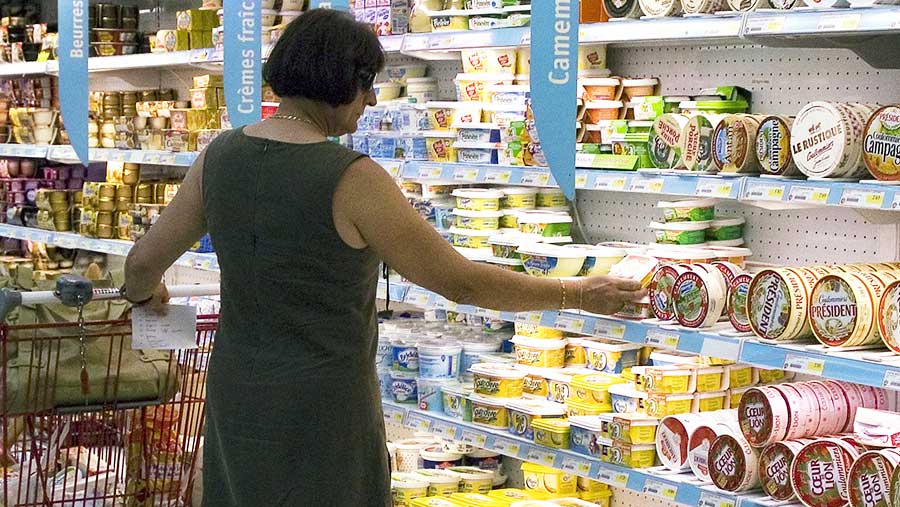 The updated Eatwell Guide, published by government agency Public Health England (PHE), has stirred up huge controversy in the dairy industry after it revised targets for dairy consumption from a previous figure of 15% in the diet down to 8%.

It also recommends people consume “some dairy or dairy alternatives (such as soya), choosing lower-fat and lower-sugar options”.

See also: What is the Eatwell Guide?

PHE told Farmers Weekly it revised its dietary advice after independent scientists on the UK’s Scientific Advisory Committee on Nutrition (SACN) provided “robust evidence” of the health benefits of a reduction in dairy intake.

Dr Alison Tedstone, chief nutritionist at PHE, said: “Dairy products and dairy alternatives are a good source of calcium and other nutrients and form an important part of a healthy, balanced diet. However, evidence shows that we get calcium from a range of sources in the diet.

“As a nation we are consuming too much saturated fat and salt, which is detrimental to our health.

“The new Eatwell Guide supports consumers to reduce saturated fat and salt consumption while still meeting official calcium recommendations and is based on robust scientific evidence.”

But dairy leaders say the guidelines were passed without anyone from the industry being consulted. Dairy UK, the trade association representing Britain’s dairy supply chain, described the new guide as “both baffling and disappointing”.

“The dairy industry was not consulted during this process and had no opportunity to give scientific evidence or help prevent serious flaws in the guidelines,” said Judith Bryans, chief executive of Dairy UK.

“We need to understand how Public Health England reached their conclusions. Therefore, we will request all documents behind this decision and we will conduct our own modelling once these documents are made available.”

Dr Bryans added that it was “genuinely disconcerting” to see dairy foods being disadvantaged by a public health campaign.

“At a time when obesity is a real crisis for children and adults alike, nutrient-dense wholefoods such as dairy products should be put front and centre in dietary guidelines,” she said.

The Dairy All-Party Parliamentary Group (APPG) this month released a report – Putting Dairy Back on the Daily Menu – that highlights the unique contribution of dairy to public health.

The report calls for UK government to follow the lead of other countries, such as France, Canada and Australia, and introduce a three-a-day dairy programme to remind consumers of the unique nutritional value of dairy products.

It said it was “regrettable” that official UK nutritional guidelines “would not promote milk and dairy products as part of a healthy and balanced diet as actively as other countries do”.

At a time when obesity is a real crisis for children and adults alike, nutrient-dense wholefoods such as dairy products should be put front and centre in dietary guidelines Dr Judith Bryans, chief executive Dairy UK

Heather Wheeler, chairman of the Dairy APPG, said the Eatwell Guide was “at odds” with her group’s recommendations, which they planned to discuss further with the Department of Health and Public Health England.

She added: “Dairy products are full of key nutrients we all need, from the well-known calcium and protein to the lesser-known iodine and vitamin B12. We should be making every effort to encourage dairy consumption, not taking steps to reduce it.”

AHDB Dairy has announced plans to spend £3.5m of levy payers’ money to promote British dairy produce over the next three years, including an application for EU support for a co-funded dairy marketing campaign.

“As an evidenced-based body, we can understand why Dairy UK have called for an opportunity to look at the documents and science underpinning this radical decision.

“It’s vital the dairy industry educates the public on the nutritional benefits of dairy and promotes the quality of our dairy products.”

NFU dairy board chairman Michael Oates said PHE’s decision was “yet another kick in the teeth for dairy farmers”, who were struggling to cope with a global downturn in dairy commodities.

He added: “This decision is potentially devastating for our industry. Right now, we need more people to consume more British dairy products. The logic behind this decision doesn’t stack up.”

What the dieticians say

Dietitians have expressed their concerns at some aspects of the new Eatwell Guide, which seeks to reduce dairy intake.

Catherine Collins, an NHS dietitian with 30 years’ experience, said the guide appears to have been prepared with the aim of bolstering fibre and plant foods in the national diet – and there was nothing wrong with that.

But increasing intake of fruit, vegetables and wholegrains at the expense of other food groups could upset dietary balance.

As an example, increased dietary phytic acid content from wholegrains, or oxalates from fruits and vegetables, could interfere with dietary calcium absorption from plant sources. This could lead to inadequate calcium status if dairy intake is also reduced.

“Milk calcium provides more than 60% of calcium intake in toddlers in the UK diet, and we don’t want to be discouraging mothers from giving it,” said Ms Collins. “Also, a 200ml glass of any animal milk provides about 240mg of calcium – one-third of the daily adult requirement.

“The Eatwell Guide also points to calcium from other sources, such as figs or sesame seeds – but you would need to eat five figs or three heaped tablespoons of sesame seeds to get the same calcium as a glass of milk. That’s not practical.”

Similarly, cutting dairy consumption could lessen protein and iodine intake. Protein is especially important in an ageing population, helping to maintain muscle tone, while iodine is critical for the thyroid hormone thyroxine, which controls metabolism.

Milk calcium provides more than 60% of calcium intake in toddlers in the UK diet, and we don’t want to be discouraging mothers from giving it

“An underactive thyroid is associated with an increased risk of Type 2 diabetes and reduced IQ in children from mothers with low iodine during pregnancy,” said Ms Collins. “Many teenage girls are already borderline iodine deficient. If they don’t get it from milk, the other main source is oily fish, which is not popular.”

Ms Collins also said the attack on whole milk as opposed to skimmed milk was “baffling”. “Whole milk only has 4% fat, so it is by definition a low-fat product. Calling it risky worries me as a dietitian.”

These views were echoed by Anne Mullen, director of nutrition at the Dairy Council, who said PHE had jumped to a “premature conclusion” about the role of dairy and saturated fats.

“PHE has ignored evidence over the past five years about the variety of components under the term ‘saturated fat’,” she said.

Dr Mullen added that PHE had also admitted its modelling does not take the bio-availaibilty of calcium into account.