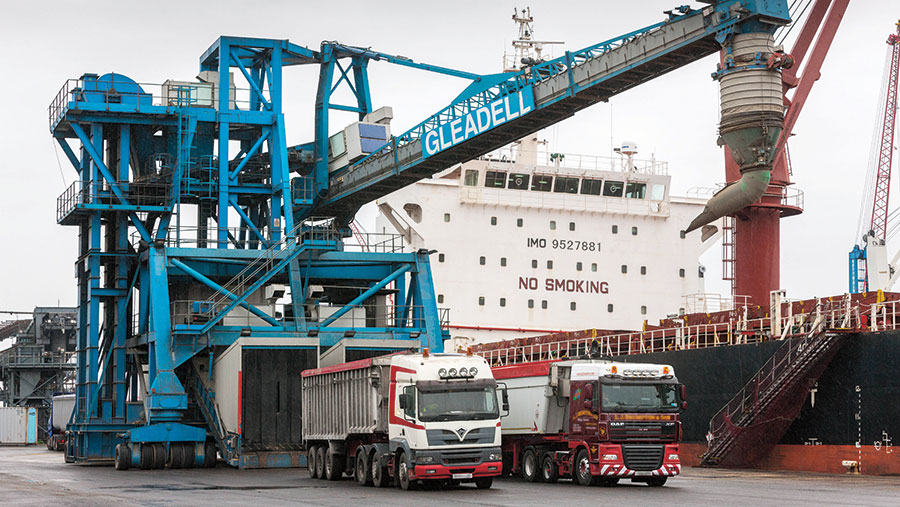 Confidence in UK government’s ability to secure good trade deals post-Brexit and in the likelihood of improved business prospects after leaving the EU appears to be waning.

A survey of more than 1,400 farmers and non-farmers by Farmers Weekly shows that, among both groups, there has been a decline in the number who believe UK negotiators will secure preferential trade deals once we have left the EU.

See also: How farmers felt about Brexit 12 months ago

Asked this question in an equivalent survey 12 months ago, we found 45% of farmers were either “very confident” or “quite confident” the UK would get a good trade deal. But that figures has now slipped to just 35%.

Conversely, the proportion of farmers “not very confident” or “not at all confident” in a favourable trade outcome seems to have grown.

This is almost an exact reversal of how farmers predicted things would turn out when questioned on trade prospects in April 2016, ahead of the EU referendum.

And the story is much the same among the non-farmers we surveyed, with 67% now having little faith in a good trade outcome.

Much has happened in the past 12 months to shape this opinion. Prime minister Theresa May has set out her vision twice (in her Lancaster House and Florence speeches), calling for a bespoke trade deal with the EU.

This would place the UK outside the single market and customs union, but could involve a so-called “customs arrangement” with the EU, enabling the two sides to enjoy “as frictionless trade as possible”.

It would also leave the UK free to sign its own free-trade deals with other countries such as New Zealand, China and the USA, as it sees fit.

The EU has made clear it is far from happy with this notion, as it does not want to see the UK letting in goods produced to lower standards at lower tariffs, which may then indirectly displace goods in its own market.

More fundamentally, the EU does not want to see the UK in any way “rewarded” for its Brexit decision.

And then there is the issue of trade deals with other countries. Provisional agreement for the EU and UK to divvy up current tariff-rate quotas for things such as New Zealand lamb and butter has drawn stinging criticism from numerous exporting countries, who want a bigger market share post Brexit.

The USA has also indicated it will play hardball in any future trade talks with the UK, insisting its chlorine-washed chicken and hormone-treated beef are included in any package.

As one survey participant put it, “my biggest fear is that we will be isolated from Europe and desperate for trade with the USA, where President Trump is only out to protect the US markets”.

As for income prospects, again both farmers and non-farmers have become more pessimistic over the past 12 months – and are far more gloomy than they were when originally surveyed before the EU referendum.

According to our latest poll, just 28% of farmers now believe they will be better off post Brexit, with 46% expecting to see an income decline.

That compares with 43% who thought they might be worse off as a result of Brexit a year ago, and 37% before the referendum.

Even among those farmers who say they would still vote to leave, only 50% now believe they will be better off, compared with 63% who felt this way when they headed to the polls on 23 June 2016.

And among the non-farming cohort, there has been an even steeper slump in expectations, with just 22% seeing a benefit to their businesses from Brexit, compared with 54% who think they will be worse off.

This pessimism in part relates to trade concerns, with the prospect of lower prices, should the free-market voices in government win the day and tariffs are removed on things such as imported Brazilian beef or Canadian cheese.

But just as important is the future direction and level of farm subsidies, and most in the farming sector are now resigned to the prospect of cuts in taxpayer support and a retargeting towards environmental measures by Defra secretary Michael Gove in his quest for a “green” Brexit.

Overall, farmers with potatoes in their rotation were the most pessimistic in the survey, with 54% believing they will be worse off after Brexit, while pig producers were the most optimistic, with 36% anticipating an income gain.

What our respondents had to say about Brexit

On a future trade deal

“I am very worried we will be cut off from the European market and lose opportunities to export our produce, tariff free. A large proportion of the lamb we produce goes to France.”
Pro-Remain, beef and sheep producer, Wales

“We need to understand that, demographically, global population growth between now and 2050 will open up markets five times the size of the EU, which will stagnate or decline.”
Pro-Leave, non-farmer, Midlands

“When the full costs and the full effect of not enough migrant labour become apparent, it will be too late to change direction as the costs will be even greater.”
Pro-Remain, cereal and beef producer, South East

“Market adjustments will occur that will allow my farm and farming generally to be able to generate profitability without relying on EU subsidies.”
Pro-Leave, cereal grower, Northern Ireland

On greatest hopes and fears

“My biggest hope is we will get away from the stranglehold that Brussels has on this country. The EU has got too Big Brother and dictatorial.”
Pro-Leave, cereal grower, East Anglia

“My greatest fear is farming will be the last in the queue for payments, even though it produces a range of public goods.”
Pro-Remain, beef and sheep producer, South West