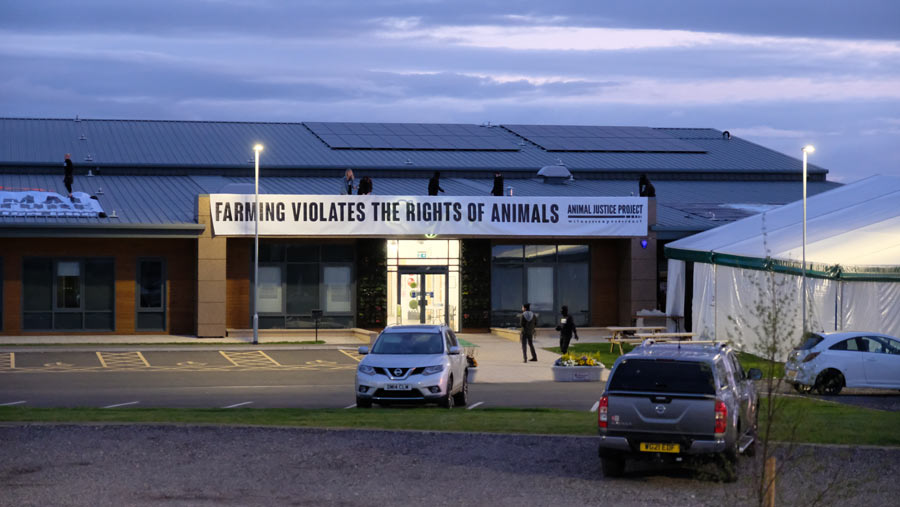 Animal rights activists claimed they were “sprayed with manure” by farmers when they protested at a flagship beef expo.

Masked protestors scaled the roof at 4am and unfurled banners and they set off flares throughout the day. 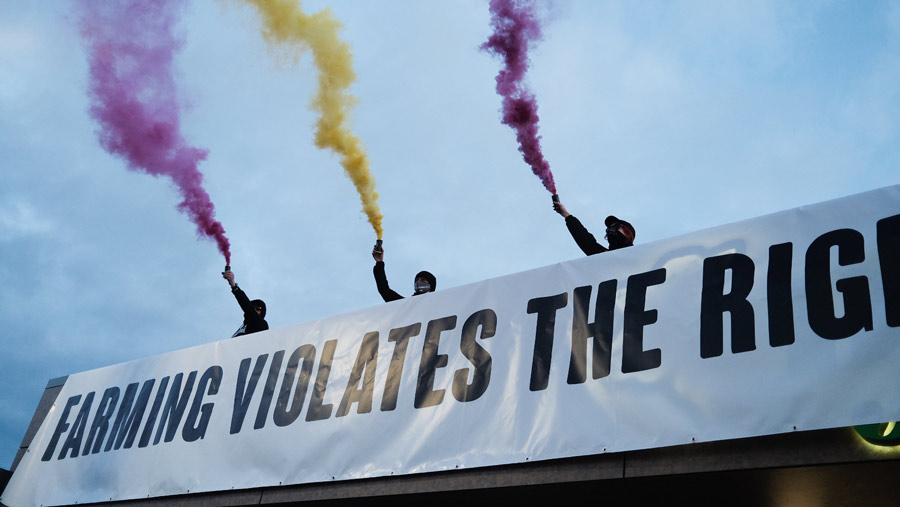 The protesters on the ground claimed that a farmer drove a tractor into them, “spraying cow poo over them”.

They also claimed that another farmer used a JCB digger to reach protestors on the roof and “chased them around, resulting in an activist falling and dislocating her finger”. The group said the woman was taken to hospital for treatment.

Durham Police said they were investigating the group’s claims of assault, adding that five activists were arrested.

A force spokesperson said: “Five protesters came down from the roof of the farmers’ mart at around 5pm yesterday (Saturday, 28 May) following negotiations with officers on the scene.

“All five individuals were arrested on suspicion of criminal damage.

“Officers are also making enquiries following an allegation of assault, however no arrests have yet been made in relation to the report.”

A spokesperson for Animal Justice Project said the aim of the protest was to call for an end to animal agriculture.

The industry event is the largest of its kind in the UK, with industry leaders, Defra representatives and around 5,000 beef farmers in attendance.

NBA chief executive Neil Shand described the atmosphere at the event as “buzzing”, saying the protesters’ actions backfired as it “galvanized the industry even further”.

He told Farmers Weekly: “The group’s claim that their protest was peaceful was considerably off the mark as they shouted abuse and yelled at people when they entered the event.

“Everyone has the right to protest peacefully, but they lose the moral ground when they were masks and balaclavas and cause criminal damage.”

Mr Shand said the standards of animal health and welfare in the livestock industry were “second to none”.

He added: “The livestock sector is the main cog in the agriculture wheel. If you lose even a part of the cog, the whole wheel will fall over.”

At the event, Morrisons announced that they would pay beef farmers an extra 10p/kilo for dairy bred beef that are slaughtered at under 18 months.