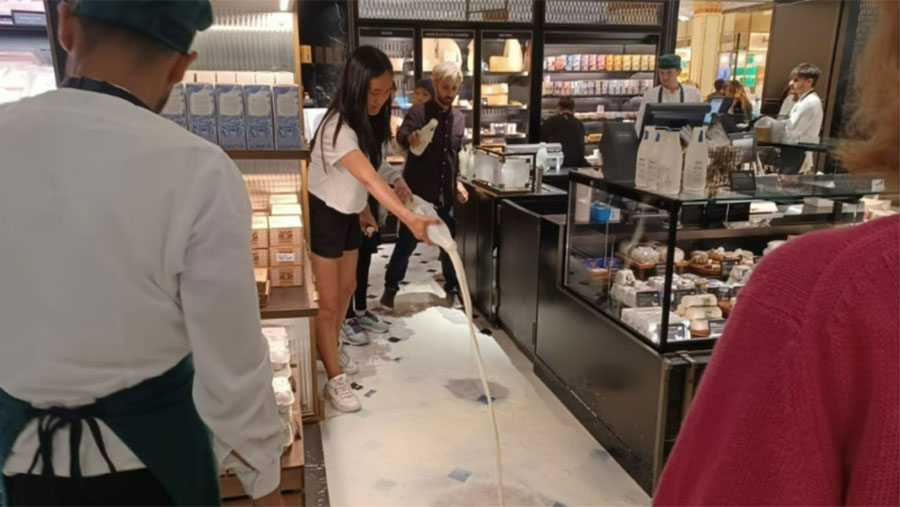 Vegan activists poured milk on the floor of Harrods department store and staged a sit-in in the cheese aisle in a Waitrose store in London as part of a new campaign calling for an end to dairy production.

Anti-dairy protestors from Animal Rebellion, a sister group of Extinction Rebellion, also blocked the dairy aisles at Marks & Spencer in Oxford Street, London, on Wednesday 27 July. Up to four supermarkets were affected in cities including London and Birmingham, with the group describing the protests as “non-violent”.

Photos and videos posted on social media show the activists removing cartons of milk from the shelves at M&S and Waitrose and placing them in trolleys.

At department store Harrods, in central London, the activists poured the milk on the floor in the aisles and put out a sign saying: “Caution! Climate crisis. Dairy = death.”

A group of vegan activists who disrupted the Queen’s Jubilee have staged a protest by pouring milk on the floor of Harrods.

The activists from Extinction Rebellion staged the protest on Wednesday afternoon to call for an end to the dairy industry. pic.twitter.com/tnL8RFkrrK

It is not clear if the activists bought the milk from the store or brought it with them.

A spokesman for Metropolitan Police said he could not find any reference to any police calls in relation to the Harrods protest.

But he added: “Police were called at approximately 6:25pm on Wednesday, 27 July by store security to reports of a protest taking place at a shop in Oxford Street, W1.

“The protestors left after around an hour. No offences were alleged; no arrests.”

In Birmingham, activists occupied a supermarket aisle at a Tesco store in the city and sat down in front of milk holding posters demanding a transition to a plant-based food system and claiming “animal agriculture is the single largest driver of habitat loss”.

On social media, the group said it decided to occupy dairy aisles and pour out milk “to take a stand against the cruelty and destruction caused by animal farming”.

The activity was “just the start” of a campaign of direct action against the dairy industry in September, it said.

However, their actions sparked an angry social media backlash from members of the public, who questioned the motivations of the group.

Responding to Animal Rebellion’s post on Facebook, one said: “I don’t agree with this type of activism, I think it does more harm than good, if people don’t like vegans they are far less likely to listen to them.”

Another said: “Mmm. This post is going well for the vegan minority. They have to behave like this because no sane person is listening to them. Just like a spoilt entitled child who can’t get their own way.”

One farmer said: “I call it terrorism, you have no right to do this. You are all hypocritical in your actions. Learn about regenerative farming and soil health done in the traditional farming way.

“There is no talking to you people, doing this and forcing your views puts you in the same boat as Putin.”

Animal Rebellion says it plans to cause major disruption to the supply of UK dairy products in September.

Activists from Animal Rebellion were arrested after causing disruption at the Queen’s Platinum Jubilee celebrations in June.

The group is planning high-level disruption to the supply of dairy from 3-11 September by blockading major milk distribution centres across the UK. Activists will also be staging further protests in dairy aisles at supermarkets.

Animal Rebellion is trying to enlist up to 500 people to take part in the protests. Anyone who takes part must sign a form to commit to being arrested at least once during the demos.

The group claims that a third of Brits are transitioning to a plant-based system. But previous estimates by the Vegan Society have put the number far lower. In 2019, it estimated that 600,000 adults – equivalent to just over 1% of the population – were vegan.

According to the Defra Family Food Survey, 98.5% of UK households still buy liquid (drinking) milk, making it a firm favourite in shopping baskets.

Overall consumption of liquid milk in the UK has only declined marginally over recent years. In total, retail sales volumes of cow’s milk in 2019 were down 1.5% compared to 2015.