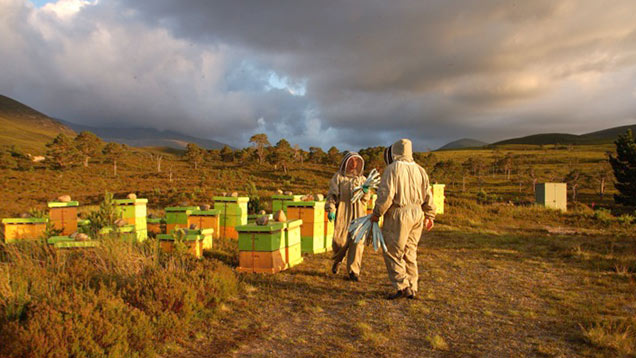 Honey production in the UK is way down this year with some bee farmers facing their worst crop for 40 years, according to the Bee Farmers’ Association.

The picture round the country is varied, but even in the south of England where crops are usually good, there are reports of below average yields.

In Scotland, however, the honey harvest has been disastrous and the crop is expected to be 50% lower than normal, said Bee Farmers’ Association (BFA) general secretary Margaret Ginman.

There was under a third of the normal spring blossom honey crop and the long wet summer has meant colonies failed to build up to gather nectar for heather honey.

The flowering of the heather itself was late, and not as glorious as in some years.

“It has been a terrible season with only a couple of weeks of good weather when small amounts of honey have come in”
David Wainwright, Bee Farmers’ Association

BFA chairman David Wainwright, who farms 700 hives across England and Wales, predicts the disastrous season will leave many of the associations 400 members struggling to make ends meet.

“It has been a terrible season with only a couple of weeks of good weather when small amounts of honey have come in,” he said.

Dumfries bee farmer John Mellis, who farms about 500 hives, said the poor honey crop was not the only problem.

Colonies have failed to build up so are going into winter relatively weak.

“This means there are not going to be enough winter bees to sustain the hives resulting in a prediction of high winter losses,” he said.

Murray McGregor, the biggest bee farmer in the country, farms about 2,700 hives and is based in Coupar Angus, Scotland.

He said: “The heather has flowered late meaning that the winter bees are having to work the flowers. This spells disaster for next year.

The heather honey crop from the North York Moors has been good though the honey from pollination work was down, he explained.

Bee farmers play a crucial part in agricultural pollination by transporting their hives to crops for farmers ever year. And Mr Pont said the ivy that is coming into flower will help the bees build up for the winter.

Bee farmer Cris Reeves, of Haughton Honey in Cheshire, said the harvest was likely to be a third of the size of last year after poor weather affected nectar flow.

“Wet weather and cooler temperatures during key times of nectar production over the spring and summer have led to a dramatic drop in the amount of honey harvested this season,” he added.

But stocks at Haughton Honey remain buoyant thanks to a bumper harvest in 2014.

Alan Riach, vice-president of the Scottish Beekeepers Association, said: “The weather in Scotland in May and June was really chronic.

“The bees broke up very slowly. It also caused a lot of problems getting our queens mated.

“It was truly a dreadful year up to late July. During August, the weather improved and the bees have taken in a bit of honey. But is certainly is a mixed picture.”

NFU vice-president Guy Smith said this year’s results showed there were many variables and it made no sense to blame poor honey harvests on one factor, such as pesticide use.

“In any environment there are so many variables. Just to focus on one or two and thereby think you can prove a correlation is not a sensible way to go about it,” he added.

“We are fully in favour of greater research into the use of neonicotinoids and their effects in the field on bees.”