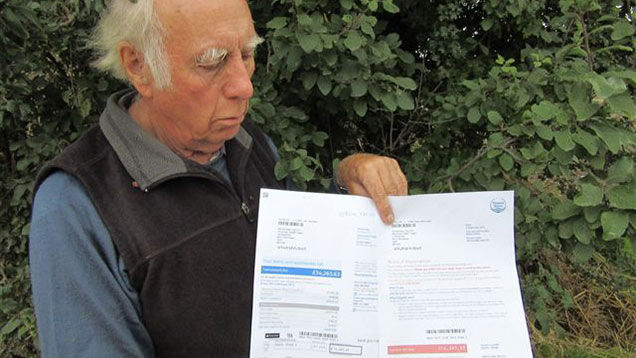 An arable farmer was left stunned after being sent a water bill for £54,265 – a staggering 9,000% higher than his usual bill.

Michael Dallyn has been farming at Wickham Court Farm, in West Wickham, Kent, for 35 years.

But Mr Dallyn, 79, said there was no way he used the amount of water Thames Water is billing him for and there were no obvious leaks.

“We have been farming here at Wickham Court since 1980. Thames Water are welcome to come and monitor my water use, but things haven’t changed much in that time,” he said.

“We grow winter wheat, oilseed rape and winter beans, so the biggest water use is on crop spraying and then the horses – but nothing like the figures they are suggesting.

“This should not happen to anyone, let alone people our age. The older you get, the worse it feels. If the bill is out of the norm, it should be looked at on a manual check.”

Mr Dallyn said he called Thames Water customer services and told them there had been an error with his bill. He was told the company would “look into” the bill and freeze the direct debit payment.

In the meantime, he decided to send Thames Water £600 to cover the amount he believed he should be charged for water use during this period. In the previous quarter, his bill totaled £571.

Thames Water then sent Mr Dallyn a second bill in late August, adding the previous unpaid quarter up to 6 August and demanding a payment of £54,265.

The bill was calculated from 21,821cu m of water use on a bypass meter and 585cu m on the standard meter. Incredibly, Thames Water deducted the £600 from the bill, which Mr Dallyn had sent in.

The letter included a warning that Mr Dallyn’s water supply would be disconnected and his credit rating history could be affected if he did not pay the bill within seven days.

Mr Dallyn believes a water meter change carried out by Thames Water in February is the likely cause of the billing error.

A spokesman for Thames Water said: “We are really sorry for the worry this incorrect bill has caused.

“We have been talking to the customer and have put the account on hold while we exchange the meter and solve the problem.”

Are you a farmer who has had problems with incorrect utility bills? If so, call the newsdesk now on 020 8652 4905 or email: philip.case@rbi.co.uk