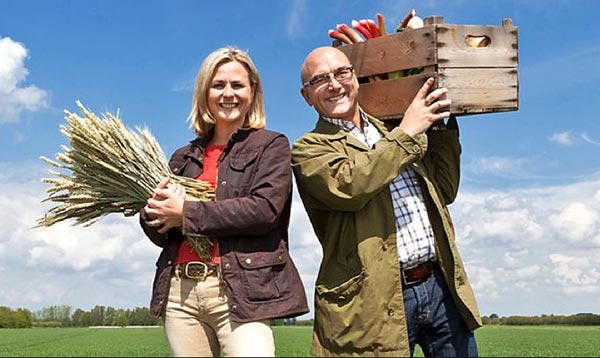 The hit BBC2 programme Harvest is set to return for second series next year, with writers in talks about fresh content.

The three-part series, presented by Philippa Forrester and Gregg Wallace, received widespread approval from farmers when it hit our screens last autumn.

The series revealed the secrets behind the culmination of our crop-growing season, and shed light on British farming and its contribution to our food.

It documented the harvest progress of Lincolnshire potato farmer Andrew Burgess and Guy Smith’s arable farm at St Osyth, near Clacton in Essex, among others.

Producers took a break from filming the programme this year. But series producer Lucy Smith has revealed that writers are in talks about creating a follow-up series and Harvest would be back in 2015.

She announced on her Twitter account (@lucymarysmith1): “I’m very excited to say that ‪#bbcharvest will be back for ‪#Harvest2015!! Looking forward to more fun farming adventures around the UK.”

The 2013 series featured farmers battling to recover from the freak late winter storms and coldest spring for 50 years.

It examined cereal, fruit and vegetable production. It also revealed the secrets behind the culmination of the UK crop-growing season, and shed light on British farming and its contribution to our food.

The series was supported by BBC Learning, which produced a free booklet explaining the science behind UK crop production and practical recipes.

So far, however, no details have been released about the content for the forthcoming series.

Ms Smith said on Twitter: “We’re at that fun early stage where everything’s still up in the air… Lots of research and story-finding to be done.”

News that the series will return in 2015 has been well received by farmers.

Nottingham arable grower John Charles-Jones said on his Twitter account (@woodboroughpark): “A very good and popular programme with farmers and non-farmers alike, that presents farming as it really is #bbcharvest.”

East Anglian poultry farmer Nigel Joice, a former NFU poultry board chairman for East Anglia, said on Twitter that Harvest was a “superb series” and it was “great news” it would be returning to our screens.