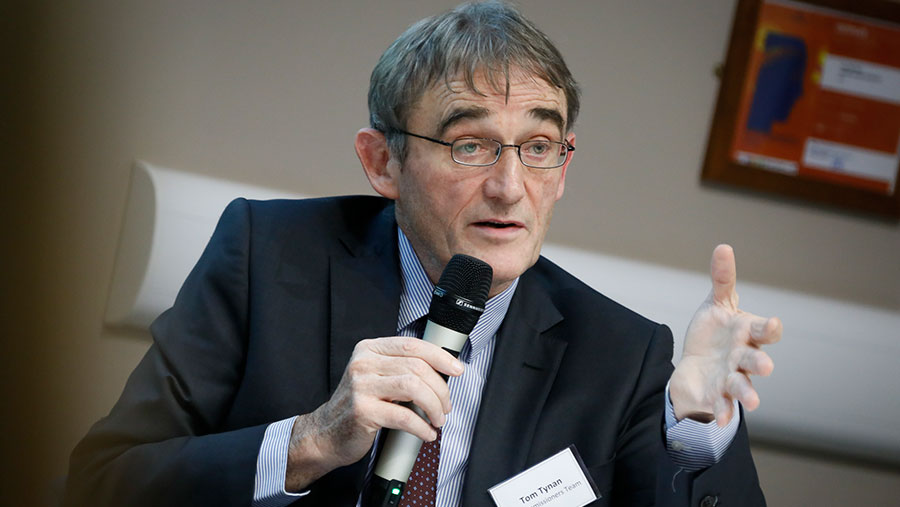 The UK’s departure from the European Union will have a lasting impact on farm profitability in Northern Ireland and Ireland, a senior Brussels adviser has warned.

Whatever the eventual agreement on the Irish border, Brexit has major implications for the substantial trade in agricultural products between Ireland and the UK, said Tom Tynan.

Mr Tynan is an Irish national who worked in the agri-food industry for nearly 20 years before being appointed a key adviser to EU farm commissioner Phil Hogan in 2014.

“We should never forget how things were in Northern Ireland and acknowledge the role that an invisible customs-free land border has had in the development of businesses on both sides of the border,” he said.

With 800m litres of milk crossing the Irish border annually, agriculture was arguably more inter-woven between Northern Ireland and the Irish Republic than between any other EU countries.

Mr Tynan was speaking at a debate organised by the British Guild of Agricultural Journalists, supported by Massey Ferguson, at Harper Adams University, Shropshire, on Friday (1 December).

Even an agreement that involved no physical border would still probably result in the need for customs declarations, he told Farmers Weekly.

That would add enormous complexity and costs to businesses that would impact on farming profitability, said Mr Tynan.

“Take a Northern Ireland meat company that sends six loads across the border a day, six days a week. At the moment they have to declare 486 loads in one go at the end of the quarter.

“Even under a duty-free customs agreement they would have to declare each load – which would be 1,872 declarations a year.

“If you estimate that each declaration costs £70, then that would add £130,000 to the cost of doing business every year.”

Also speaking at the debate was Alan Jagoe – a dairy and beef farmer from County Cork and past president of CEJA, the European council of young farmers.

“Brexit dominates everything at the moment – 40% of all we produce goes across the border into the UK,” said Mr Jagoe.

“While British farmers have benefitted from the 25% weakening of the pound against the euro over the past two years, it has hit Irish farmers hard.”

Individual farmers felt they could do little about Brexit, said Mr Jagoe.

But by investing in education, exploring innovation and focusing on efficiency, they would be in a better position to manage any risks and opportunities that would arise.