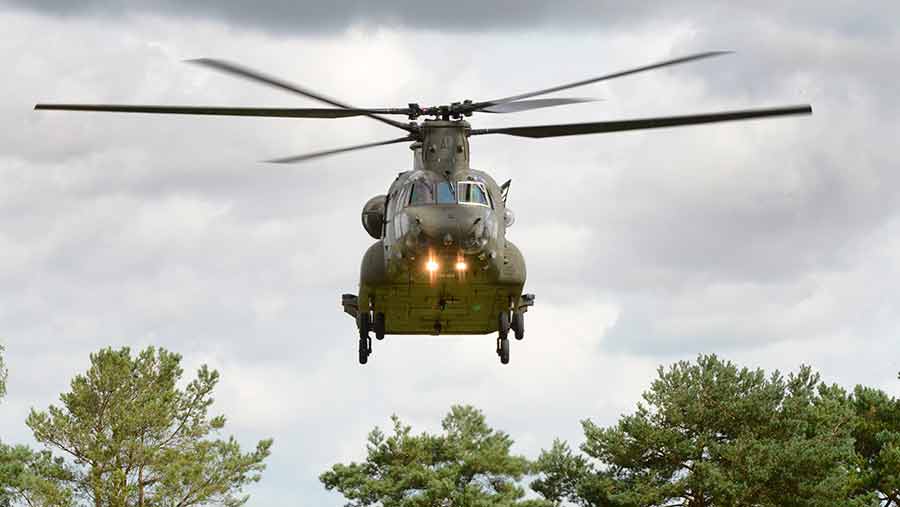 A cow injured by a Chinook helicopter is among 35 incidents involving low-flying military aircraft in East Anglia over the past five years.

Farmers are among those most regularly affected by low-flying helicopters and fixed wing aircraft, according to details released by the Ministry of Defence.

In total, the MoD paid out £234,170 in compensation for loss and damage caused by low-flying military aircraft over East Anglia and Lincolnshire between 2011-12 and 2015-16.

The incident involving the cow was one of 10 payouts in Norfolk during 2012-13. It involved a £3,265 compensation payout, according to MoD figures.

Other incidents include £25,000 paid out after an emergency landing by a Chinook helicopter caused damage to crops and farmland in Essex during 2013-14.

Low-flying manoeuvres involve fixed wing aircraft flying as low as 250ft above ground level – although not over built-up areas. Helicopters can fly as low as 100ft.

Many of the payouts involved the loss of gamebirds. Other incidents include compensation for damage to fencing, personal injury, a damaged boat and injuries to a horse.

Military chiefs are proud of their links with the local community and Apache attack helicopters from Wattisham are regular visitors to the annual Suffolk Show.

Wattisham pilots have included Prince Harry, who thanked local people for putting up with his helicopter flights during a visit to the show in 2014.

The MoD compensation details were uncovered by a Freedom of Information request submitted by the East Anglian Daily Times  newspaper.

An MoD spokesman said: “We understand that military flying can be noisy and unpopular – but it is an essential part of operational training.

“The MoD is constantly striving to ensure that such disturbance is kept to an absolute minimum and that the burden of noise distribution is as evenly distributed as possible.”