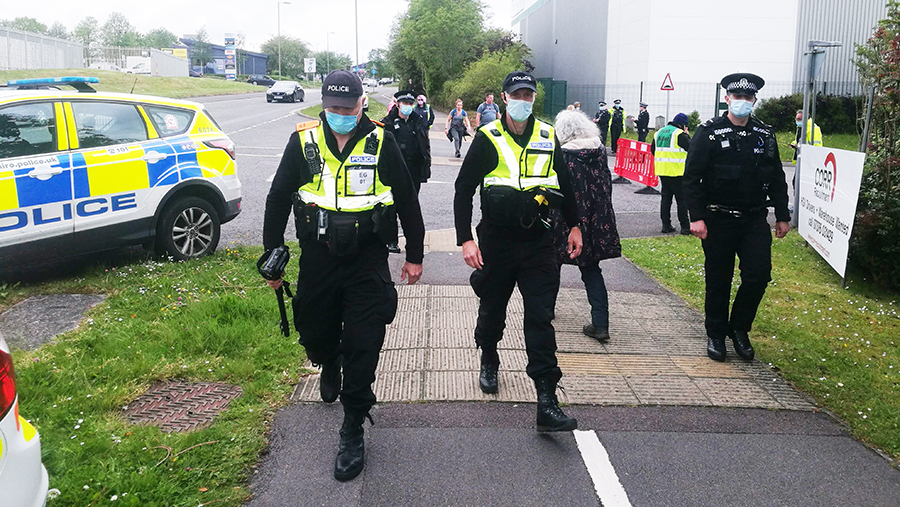 Fourteen vegan activists have been charged with various offences following a blockade at a McDonald’s distribution centre last weekend.

The charges relate to protests on Saturday 22 May in Basingstoke, Hampshire and Hemel Hempstead, Hertfordshire.

Animal Rebellion used trucks and bamboo structures to prevent access at four depots. No charges have been made in connection with protests in Coventry, and Heywood in Greater Manchester.

The animal rights group targeted the fast-food company demanding that it switch to a fully plant-based menu in all its restaurants by 2025 to tackle climate change and ease animal welfare.

At the Basingstoke protest, the activists handed out leaflets saying McDonald’s “should take responsibility for the destruction, animal suffering and harm to people that they cause”.

But farm leaders dismissed the claims, pointing out that all beef supplied to McDonald’s restaurants in the UK is sourced from British and Irish farms – not from deforested parts of the Amazon.

Hampshire Police said they had charged eight people with aggravated trespass following an incident at an industrial estate off Houndmills Road, Basingstoke.

They were also charged with “watching or besetting a house or place to compel the abstention or doing of a lawful act”, an offence under the Trade Union and Labour Relations (Consolidation) Act 1992.

They will face Basingstoke magistrates on 8 June.

Sidney Davies, 21, of Bristol; Bethany Croakin, 25, and Jasmine Maslen, 18, both of no fixed address, were also bailed to appear at the same court on 10 June.

Hertfordshire Police said six people have been charged with “using violence or intimidation on person, family or property to compel activity or abstention from lawful activity”.

They were also charged with obstructing persons engaging in a lawful activity.