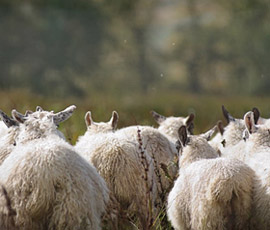 A farming couple, who will pay a £5,000 reward for the return of sheep stolen from a Carmarthenshire mountain, say the animals are irreplaceable.

Hugh and Mary Davies noticed 145 of his Welsh Mountain sheep were missing from their 1,000-head flock when they rounded it up from the Black Mountain near Brynamman for the winter.

They are willing to pay £5,000 for any information leading to the recovery of the sheep or the conviction of the thieves.

“The problem is that the sheep are not replaceable if they have not been bred on the mountain,’’ said Mr Davies.

He admitted rustling was causing havoc among sheep farmers. “We usually lose about 30 to 40 sheep a year and some of our neighbours have also lost some stock this year but nothing to this extent has ever happened to us before,” added Mr Davies.

The missing sheep – 100 ewes and 45 ewe lambs – have the initials ‘EJ’ stamped on their right hand sides in red. There is a hole in their left ear and there is a square notch cut into their right ear. The tip is cut from that ear also.

Dyfed Powys Police confirmed they were investigating the theft. Sergeant Matthew Howells, who represents the police on rural issues, said farmers, police and the wider rural communities needed to work together to combat rural crime.

“The current prices sheep are fetching, although good news for the farming industry, does then lend itself as being a target for criminals intent on making money from their criminality,’’ said Sergeant Howells.

“If we can work with the farming community in setting up Farm Watch schemes as recently showcased in North Ceredigion then we will hopefully be on the right track to reduce rural crime.’’

A survey previously carried out by the Farmers’ Union of Wales revealed that thousands of sheep are stolen from farms across Wales annually.

Call Farmers Weekly in strictest confidence on 020 8652 4339 with any information.

Read more on rural crime at our dedicated crime page

Have your say on crime on our forums