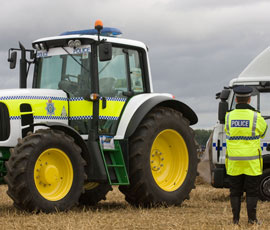 The cost of countryside crime fell by almost 20% last year, according to the latest figures released by rural insurer NFU Mutual.

Driving this reduction was a significant fall in claim costs for tractor and quad bike thefts, which fell by 32% and 17% respectively.

Tractors and quad bikes accounted for more than one-third of the cost of all theft claims.

In contrast, 2012 saw a slight increase in NFU Mutual claim levels for livestock theft – but nothing like the three-fold increase experienced the previous year.

The figures, based on claims data, have been released to coincide with the publication of the annual NFU Mutual Rural Crime Survey, a nationwide survey of 220 of its rural branch offices.

The trend for items most commonly targeted by rural thieves remains largely unchanged with tools, quad bikes and oil/diesel again topping the list.

While agencies suggest tractors and metal are less commonly targeted than last year, garden equipment makes a debut in the annual top ten list of targeted items, at number five.

“The fall is a vindication of the tremendous efforts made by country people, police, NFU Mutual and agriculture vehicle manufacturers to improve security and beat crime.”
NFU Mutual’s chief claims manager Matthew Scott

“The fall is a vindication of the tremendous efforts made by country people, police, NFU Mutual and agriculture vehicle manufacturers to improve security and beat crime.”

But country people should not become complacent, said Mr Scott. Rural residents should continue to make security a priority on their farms, businesses and homes, he said.

“Rural crime is still taking place at significant levels. In 2013, while numbers of thefts are slowly declining, we have seen some worrying spikes in high value tractor thefts – and a recent spate of tractor GPS guidance system thefts showing that thieves will steal anything of value from farms.”

To date, it had invested more than £400,000 funding police specialist units to coordinate activity on agricultural vehicle crime for the good of the farming industry.

National estimates reveal that the fall in rural crime was fairly consistent across most regions of the UK during 2012, ranging from -12% in the East of England to -32% in the Midlands.

Only Scotland saw an increase year-on-year (+12%), but this in itself represented a growth of little more than £200,000.

Read news about rural and farm crime and tips and advice on how to avoid falling victim on your farm.