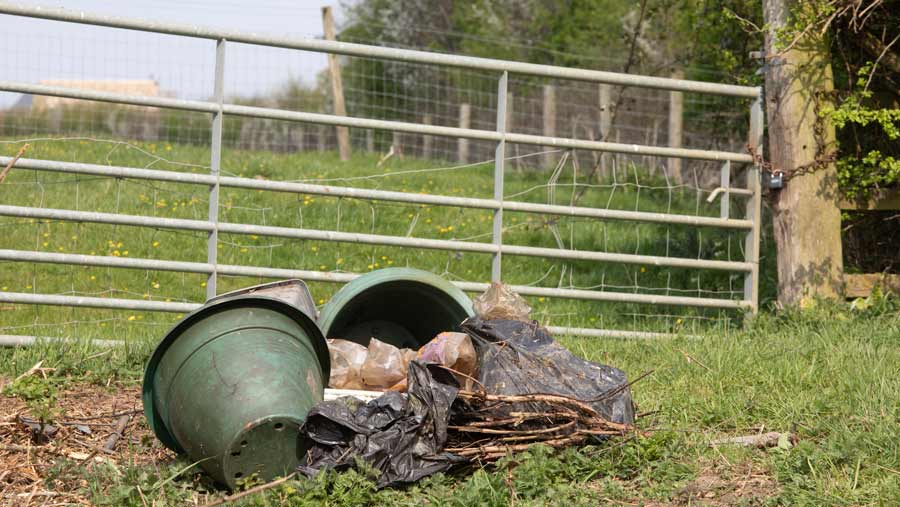 The Country Land & Business Association (CLA) has joined forces with 158 local authorities in England to demand tougher court sanctions on fly-tipping after a surge in illegal dumping during the pandemic.

The maximum fine for fly-tipping is £50,000 and/or a five-year prison sentence, yet 83% of court-imposed fines in the past six years have been below £500.

Only two people have been given the maximum fine since new guidelines were introduced in 2014.

Those guidelines are now being updated and the CLA, together with other professional bodies and councils, has written to the Sentencing Council asking it to consider changes that would lead to court fines for fly-tipping exceeding fixed penalty notices (FPN).

They also want the clean-up costs of littering on private land to be included in fines – currently farmers must meet the removal and disposal cost of waste deposited on their land.

Fly-tipping in the countryside has risen sharply during Covid; at times there has been restricted access to council waste recycling centres and unscrupulous waste criminals have continued to blight the countryside with large-scale fly-tipping.

The CLA says sentences handed down by courts don’t always match the severity of the crime or reflect the costs incurred by the public purse, and are therefore not a deterrent for offenders.

It has signed a letter sent to the Sentencing Council by councillor Eric Buckmaster, chairman of the Hertfordshire Waste Partnership, which also calls for wider use of community sentences focusing on clearing litter and fly-tipping when a defendant doesn’t have the means to pay a fine.

The signatories believe this approach would be “widely supported” by the public and would lead to greater recognition of the issue.

It also points to the use of suspended prison sentences as an effective deterrent against re-offending; sentences imposed on anyone convicted of fly-tipping for a second time should not be suspended, it says.

A farmer says cash rewards by local authorities in return for evidence of acts of fly-tipping could be a money-saver for the public purse.

Richard Heady, whose land in Buckinghamshire is a target for fly-tippers, supports the campaign for tougher sentences.

He had to meet the £800 cost of clearing up two incidents of fly-tipping – although one of the culprits was caught and was ordered to pay Mr Heady £400 for his costs.

Mr Heady reckons court fines should never be lower than the cost of dealing with an incident.

“The penalty needs to be far greater than the cost of getting rid of goods that have been illegally dumped, otherwise if someone has dumped two or three loads they are going to have made money from it.”

Mr Heady suggests rewards could be an incentive for the public to get involved in the anti-littering campaign.

“There will be dashcam footage, photographic evidence that could convict offenders,” he said.

“If there was a reward of, say, £50 offered by councils for reports that lead to a conviction, I think we would see much more reporting of these incidents.”