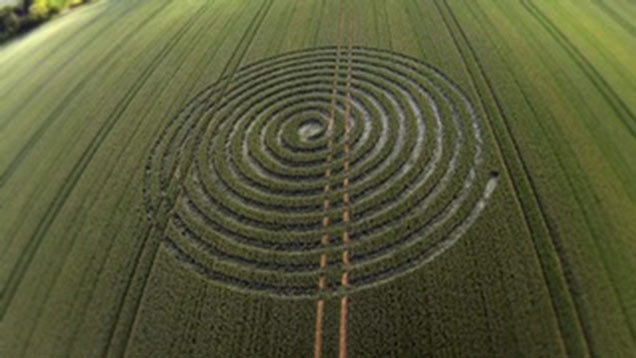 The mystery appearance of a crop circle on a Wiltshire farm is being investigated as criminal damage.

The stunned farmer discovered the circle in one of his wheat fields last week in Malmesbury.

However, he told police he had not given permission for it to be made.

Wiltshire Police said the farmer thought he had caught those responsible for the crime when he spotted five adults trespassing on his land near the crop circle.

But it later transpired that they were visiting the farm to view the crop circle, which they said had been formed two weeks earlier by an unknown person.

Again, on this occasion, the farmer had not given permission for the visitors to enter his field.

A spokeswoman for Wiltshire Police told Farmers Weekly that an officer was investigating the incident, which was being treated as criminal damage.

“Crop circles might be art in some people’s minds, but if you asked the average Wiltshire farmer, he will tell you that it is criminal damage and trespassing,” he added.

“People just turn up and do these things. It is a matter of some annoyance. There is the damage caused by the circle itself and by the making of it.

“Then on top of that, the farmer has the cost of securing his fields to prevent future incidents.”

Anyone with information is asked to call police on 101 or Crimestoppers anonymously on 0800 555 111.