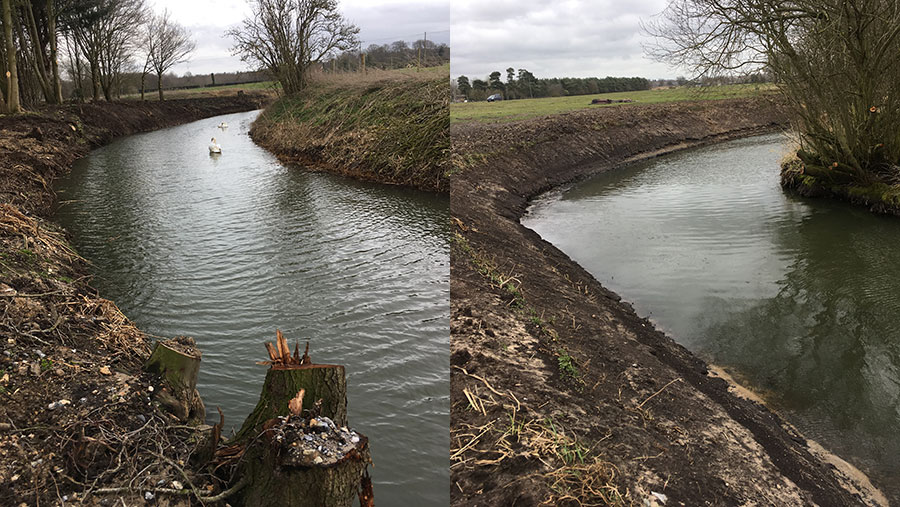 Damage to the banks of the River Ouse © Environment Agency

A mixed farming business has been ordered to pay £66,000 for damaging wildlife habitats on a Norfolk river despite already paying £400,000 to rectify the damage.

Paul Rackham Ltd, of Manor Farm, Bridgham, dredged and reprofiled the banks of the Little Ouse River at its Lodge Farm Estate, Gasthorpe, in 2018.

The work was carried out without a permit and disrupted water vole burrows along a 1.5-mile stretch of the river. Vegetation from the river and the bank was also removed.

The damage caused in October and December 2018 was discovered in January 2019 by an Environment Agency official.

Officers visited the site again in February 2019 and found that vegetation and trees had been removed from the site.

Company director Paul Rackham senior ceased the work as soon as he was made aware it needed a permit. But water vole habitats and invertebrate populations on the Norfolk Flood Plain had been seriously damaged and fell dramatically.

At Norwich Crown Court on 30 March the company pleaded guilty to operating a regulated facility, contrary to Regulation 12(1) and 38(1)(a) of the Environmental Permitting (England and Wales) Regulations 2016.

However, the firm said it was unaware it needed a permit and had obtained flood defence consent from the Environment Agency in the past.

During the hearing, the court was also told that a £400,000 remediation scheme would “most likely result in an overall enhancement to the local environment”.

However, Judge Maureen Bacon QC decided the farm had acted recklessly in carrying out the work without first obtaining a permit.

The judge handed down a £17,000 fine, which included a 20% credit for the company’s guilty plea and mitigation in the form of significant remediation work. The company agreed to pay £49,000 towards prosecution costs.

“In this case, the actions of the company caused serious damage to the local ecosystem and endangered water voles, which will take time to restore,” Ms Daniel said.