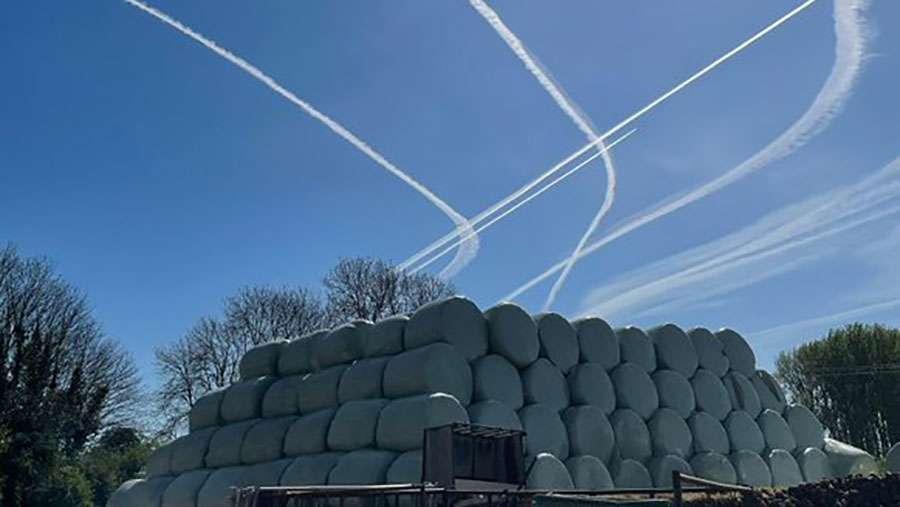 A Yorkshire farmer who posted this stark picture on Facebook of aeroplanes flying above her farm has urged the public to stop singling out agriculture for climate change.

Helena Ellis was calving cows at her 61ha beef and arable family farm in the East Yorkshire hamlet of Bursea when the whirring sound of aeroplane engines caught her attention.

She looked up and saw the vapour trails of aircraft engines criss-crossing the skies and snapped this photo on her iPhone.

Mrs Ellis then posted the picture on the British Farming Forum on Facebook on Saturday 24 April and commented: “Don’t you dare say my cows pollute the air, just look at the sky above them this morning.”

The post received more than 750 reactions and dozens of comments.

Mrs Ellis, who farms in partnership with her husband, David, and their son, Stuart, told Farmers Weekly she was fed up with people blaming the nation’s farmers when other industries, such as transport, were having a bigger effect on greenhouse gas emissions.

“I just get so annoyed at all the bad publicity for the livestock sector, and cows in particular,” she said.

“Everybody is preaching to us about cows and global warming. But everybody is jumping on aeroplanes.”

None are located near the farm, but she said it must be situated below a flight path due to the constant stream of aeroplanes overhead.

Mrs Ellis was also upset about the supermarkets’ “race to the bottom”, which was devaluing food and driving down prices at the farm gate at a time when farmers’ costs were soaring.

“The public want cheap food. Asda and Morrisons have just cut the prices of more than 500 items, including eggs and beef, blaming the cost-of-living crisis,” she said.

“Someone down the food chain has to pay for it – and that’s the people at the bottom, the farmers.”

According to the UK government, in 2020, 24% of net greenhouse gas emissions in the UK were estimated to be from the transport sector, 21% from energy supply, 18% from business, 16% from the residential sector and 11% from agriculture.

The other 9% was attributable to waste management, industrial processes, the public sector and the land use, land use change and forestry sectors.