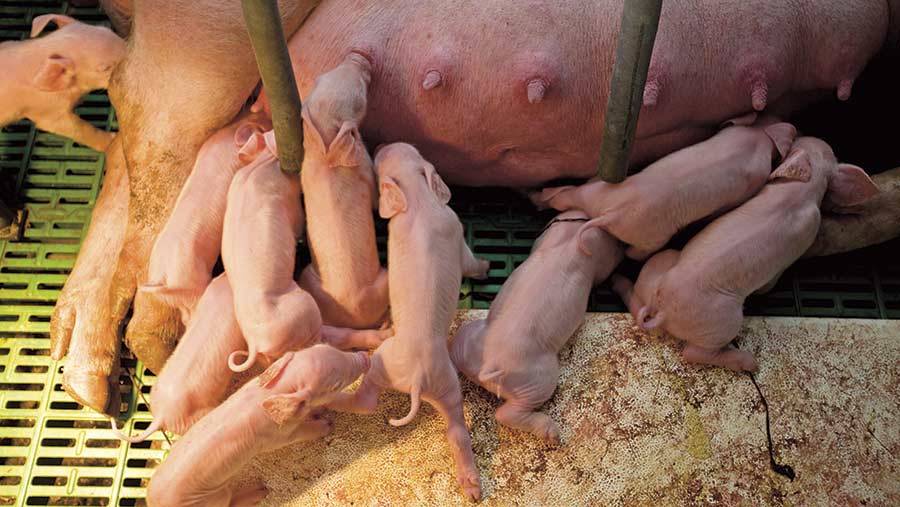 Police are investigating after more than 50 animal rights activists raided a pig farm in Lincolnshire and staged a sit-in protest.

The protestors from Meat The Victims UK stormed a farrowing house at Sandilands Farm in Newark Road, Laughterton at around 11am on Saturday (2 March).

Footage has appeared on social media showing the activists wearing white suits and masks sitting inside one of the pig pens. Up to 100 more activists stayed outside brandishing placards and posters.

Up to 100 Activists are sitting inside the Lincolnshire pig farm. This is to raise awareness of the conditions the pigs are kept in, which is standard UK practice ?Check Instagram and Facebook for videos #meatthevictimsuk @skynews @Channel4News photo:vegan vizard/insta pic.twitter.com/qPYYPQymjQ

The group said they wanted to “expose factory farming” and they remained on the site for more than eight hours.

Farmer Sylvia Hook, a joint owner of Sandilands Farm, said the activists’ actions were responsible for the death of two piglets. She also accused the group of causing damage to the hut.

“They have already done a lot of damage. They have caused the death of at least two piglets, just for the fact that we have nice, quiet, well run and calm farrowing rooms for our pigs,” Ms Hook told the Lincolnshire Echo.

“They came in mob-handed, about 50 of them all piled into a farrowing house. Immediately the sows are jumping up and down. It’s caused the death of two young piglets through being squashed and two other piglets that I have had to take to try and get them back up and running again.”

Fighting back tears, Mrs Hook added: “It’s just ridiculous. They call themselves animal rights activists and they are the ones that have caused the deaths here today. It’s crazy.”

Mrs Hook, who runs her farm with her husband Mick, defended the animal welfare standards on her farm and said the activists accused her of being a “murderer” because she produces pigs that are going to be eaten.

“Probably 90% of the British public eat pork. Our welfare standards are as good as absolutely anywhere. The pigs are our priority.

“Our farrowing house lady is absolutely distraught. She has lost piglets today that we would never lose – and all they turn round to me and say is: ‘Well, you would have murdered them anyway in a few weeks’ time.’

“It’s crazy. They have got no love of animals. They don’t understand.”

An activist from Meat The Victims UK dismissed claims that their actions had led to the death of two pigs as “baseless”.

A Lincolnshire Police spokesman said: “Officers were called to Sandilands Farm, Newark Road, Laughterton, following a call at 11.58am on 2 March about a protest at the site.

“All protesters left the site by 7pm and no arrests were made.

“We are working with partner agencies to investigate the circumstances of the incident, and to establish if any offences were committed.”

We are in attendance at Sandilands Farm, Newark Road, Laughterton, where a protest is taking place. Members of the public are advised to avoid the area https://t.co/KrsZrE1Oy7 pic.twitter.com/6us300MxNh