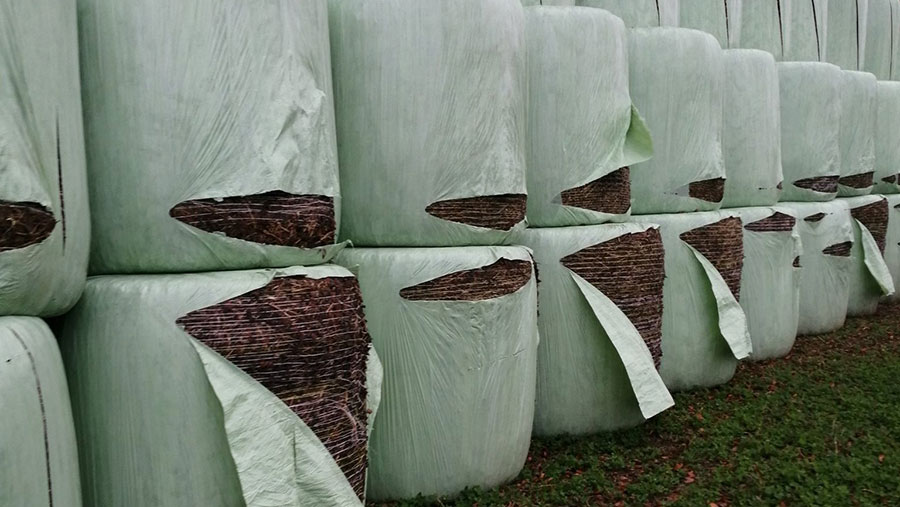 A County Durham farmer who had almost 200 bales worth about £5,000 slashed says he is mystified why anyone would do such a thing. David Martin, a mixed tenant farmer and contractor, discovered the bale wrap cut to pieces on 187 out of 250 clover silage bales stacked in a field in the village of Castle Eden.

Well there are no words. 250bales of clover silage damaged by some degenerate inbred halfwit. Pretty sure I know the culprit. But as per usual, no proof. pic.twitter.com/GQDauk95OA

Mr Martin told Farmers Weekly that the plastic bale wrap and nets below had been sliced open with a sharp knife sometime between 4.30pm on Saturday (17 October) and 5pm Monday (19 October).

“This was one person climbing on a bale tower. They must have been really vexed to do this,” he said.

“Whoever did this was really prepared and determined to do the damage. Every single bale that they could damage, they have.”

Mr Martin said he intended to use all the bales on his farm to feed his herd of 80 suckler cows and followers through the winter. Now he faces having to use up the bales by Christmas, otherwise the silage will begin to rot and spoil.

“I have got split sites with my livestock. We will have to do more running around than I had wanted to use it up,” he said. “We will just have to put it out in a ring feeder and rely on the suckler cows to eat it.

Some bales will be 5% wastage, but others will be half. It’s a really unfortunate inconvenience. In many ways, it’s worse than suffering an arson attack.”

Mr Martin has been the victim of two arson attacks at the farm in the past two years and he has also had a telehandler stolen.

“Farming in the urban fringe is becoming almost impossible,” he said. “You do not have the freedom to farm as you wish. You are trying to farm using regenerative agricultural practices and move towards net-zero emissions.

But if you can’t grow the crop or keep the stock that you want to, the system no longer works. It’s broken.”

Anyone with information is asked to contact Durham Police on 101 or the Rural Crime Hotline anonymously on 0800 783 0137.