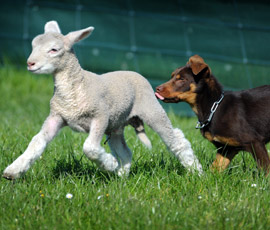 Eighteen sheep have been killed in a suspected dog attack on a farm in the West Midlands.

A further six sheep were found injured at the farm in Solihull.

The deaths have prompted a warning to pet owners from local police wildlife officers who said that such incidents were becoming more common.

Wildlife crime officer PC Timmins told the BBC that dog owners were committing a crime if they allowed their animals to “worry” livestock.

He added farm owners had the right to shoot dogs caught worrying sheep.

“Walkers need to be aware of the risk unleashed dogs pose to sheep and lambs as they can chase, attack, maim or even kill.

“Sadly, such incidents are on the increase. It’s a situation which cannot be allowed to continue.

“The sheep found dead last week have a combined value of about £3,000; this is a significant financial loss for the farmer not to mention the distress and suffering caused to the animals.”

The attacks occurred sometime between 19 and 21 November in a field off Lugtrout Lane, in Damson Wood.

Police calling for anyone who witnessed the attack to get in touch.