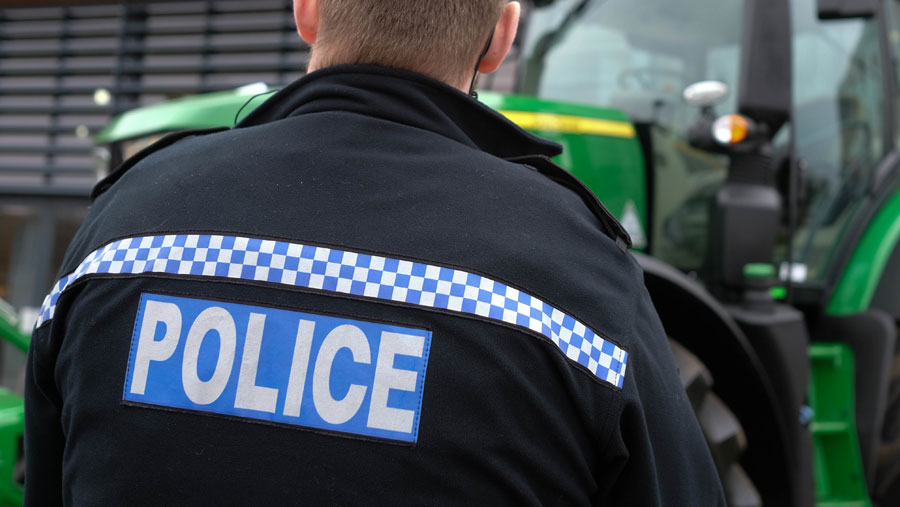 Farmers are experiencing a wide variety of crimes and they believe the government is not providing rural police forces with adequate resource to protect their livelihoods, according to a new Farmers Weekly survey.

Furthermore, there is huge concern that the prosecutions for rural crime and the sentences handed out by courts are too lenient – and rarely reflect the true emotional strain and financial losses inflicted on farmers and their businesses.

The majority of people (82%) surveyed said they believe rural crime has gone up over the past 12 months.

And without adequate support from police, farmers are considering taking the law into their own hands to protect their families and assets.

Farming communities are living in fear, with 78% of respondents saying they are concerned about becoming a victim of rural crime – 32% say they are “very concerned”.

These are the key findings of our survey, which examined the impact of rural crime on UK farm businesses.

Our online survey, which was completed in full by more than 550 farmers from across the UK, also uncovered disturbing evidence about the scale and types of rural crime affecting businesses.

Twelve per cent of respondents indicated that they had encountered armed intruders within the past three years.

And over the past 12 months, trespassing and fly-tipping have affected more than half of the respondents. More than one-third (41%) have also been a victim of hare coursing.

The theft of machinery from farms shows no signs of abating.

Notwithstanding the advances in security, high-value tractors and telehandlers are still being regularly stolen.

Farmers report that brazen thieves are taking telehandlers, diggers and forklifts to use to rip cash machines from walls.

But farmers are not standing by idly and being beaten by rural crooks – many are fighting back by increasing security. Some say their farmyards now resemble fortresses.

However, the downside of blocking entrances is that it also costs farmers valuable time to remove the barriers to access fields. Some report losing up to an hour a day.

Having multiple layers of security, such as sheds built out of concrete and reinforced steel gates, protected by internal CCTV cameras, is also a popular deterrent to safeguard agricultural machinery.

In areas where rural crime is particularly bad, farmers say they have resorted to employing personal security guards to keep estates under surveillance. Others have bought guard dogs to protect yards and livestock.

In terms of crime prevention spending, farmers are not holding back either.

Overall, 69% of victims say they are dissatisfied with the way police handle crime in their areas.

But a number of respondents believe police forces have a lack of resource to tackle rural crime.

A common complaint from farmers surveyed is that thinly resourced rural policing teams are being required to cover large areas of the countryside.

There is also widespread concern about a lack of a visible police presence in rural communities, with fewer patrols after dark – and criminals take advantage of this.

Some believe there is no point reporting rural crime because it won’t be dealt with properly by the police and courts, and insurance premiums may increase as a result.

Commenting on the survey, NFU deputy president Guy Smith said the findings were “depressingly familiar” to many farmers for whom the battle against crime is becoming an everyday struggle.

“As well as compromising the running of rural businesses, it has wider impacts on issues such as mental health,” he said.

While there were no easy answers to the challenge of criminality, legislation needed to be fit for purpose.

“For instance, hare coursers are often brought to court under the outdated 1831 Game Act because police and prosecutors find it the most realistic and practical legislation available.”

Mr Smith said the NFU recognised police resources were stretched, so wanted to see better coordination between forces and improved liaison with the farming community.

“Prosecutors and the courts also need to be fully aware just how menacing rural crime has become for many.

“No one wants to see a fortified countryside, but we cannot have the prospect of rural lawlessness where criminals see the farming community as easy targets.”

Who completed the survey?

What farmers think about rural policing

“Police hardly understand how much time and money farmers put into what we do. It is also very underestimated how much it affects mental health when rural crime is committed.” (20-99ha, Wales)

“They [the police] have limited numbers. The countryside is a vast opportunity for criminals to roam around at will.” (20-99ha, South East)

“While asset values have increased dramatically in the past decade, laws to protect and enable greater prosecution power has decreased. Equally, urban pressures have pushed a degree of underground gambling to rural areas.” (20-99ha, South West)

“There are not enough officers knowledgeable enough or willing to tackle rural criminals.” (100-199ha, South East)

“They [the police] are poorly funded and require better equipment and vehicles.” (500ha+, South East)

“Police are dealing with major crime. Rural crime is treated as a second-class offence. Officers are not seen patrolling rural areas at night.” (500ha+, Midlands)

“A grant for a CCTV system, supported by advisers going round your yard, showing simple ways to protect your property.” (20-99ha, North West)

“Opening household waste recycling centres for free, so litter is not left in gateways or hedges.” (20-99ha, South West)

“Police need to understand both the financial and emotional side of rural crime.” (100-199ha, Yorkshire & Humberside)

“A change to Right to Roam laws. I can’t roam with my dog off the lead through a factory, but they can walk across fields and destroy my livelihood with no consequences.” (20-99ha, South East)

“Increase rural police patrols. We have one crewed vehicle patrolling a beat of more than 100sq miles. Easy to commit crime around us.” (500ha+, Scotland)

“The ability to use necessary force to defend your own property.” (200-499ha, Wales)

How rural crime has changed how they farm

“Planning to pack in and move from the area. Sick of being threatened with violence from quad bike gangs and fly-tipping.” (100-199ha, Yorkshire & Humberside)

“No longer leave machinery in a field overnight to carry on the next morning. Everything has to be locked away and put in sheds, even when it’s not always convenient.” (100-199ha, South West)

“We have installed extra security systems that have to be set and unset constantly, as well as constantly shutting and locking gates and doors.” (200-499ha, East Anglia)

“Had to seal off all access to land and ditch around fields to stop deer poaching in vehicles.” (500+ha, South West)

More than one-third of people (37%) who completed our survey said they had been a victim of quad bike theft over the past three years.

Responding to this finding in our survey, Clive Harris, NFU Mutual’s agricultural vehicle specialist, explains there has been a “relentless rise” in thieves stealing quad bikes from farms.

According to NFU Mutual, up to 13 quad bikes are stolen every week from UK farms. The rural insurer says the cost of quad and ATV theft rose from £1.8m in 2015 to £2.3m in 2017 and the numbers are continuing to rise.

Mr Harris said part of the problem was urging all manufacturers of non-road registered quads and ATVs to sign up to Cesar, the agricultural industry’s official forensic marking security scheme.

Cesar’s tamperproof, microdot identification system offers a first line of defence to deter thieves and reduce the desirability of stolen vehicles on the illicit market.

Mr Harris says: “We have been fighting a battle with some of the manufacturers to get them to sign up to the Cesar scheme.

“I commend Suzuki and Polaris for coming on board, but we need other manufacturers, such as Honda, which has the biggest market share of quads, to do the same.”

The theft of high-value tractors and GPS equipment – experienced by 6% and 5% of people in the past five years according to our survey – was also seeing a “disturbing increase”, Mr Harris adds.

Here are some tips to prevent quad bike and ATV thefts:

Fly-tipping, hare coursing, farm machinery theft, trespassing and unauthorised access to land or buildings are crimes that Mark Watson’s Fox Feeds business has suffered over the past three years.

On 26 February this year, thieves stole a Caterpillar forklift from the farming and feed manufacturing company based in Brent Pelham, near Bishops Stortford in Hertfordshire.

Then two days later, an articulated lorry dumped an industrial-sized load of fly-tipped waste on one of its farms, which cost £3,000 to remove.

“The police just are not interested. After the forklift was stolen, it was four days until we had any contact from them,” says Mr Watson. “They don’t have the resource to deal with it.”

Mr Watson believes that criminals are targeting different bits of farm machinery owing to security advances in tractors. “Rural crime is becoming more complex. Thieves have moved down the line and are stealing forklifts and quads instead.”

Over the past three years, the business has spent more than £6,000 on farm security, including CCTV cameras and stronger locks fitted to gates, sheds and outbuildings.

“We have five different farm building sites, and on the sites that have cameras we have not had any bother since installing them” says Mr Watson.