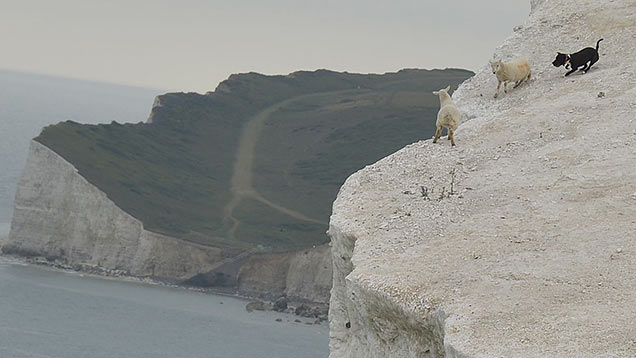 A farmer who had a lamb killed when an out of control dog chased it over a cliff has said he wants to see the owner prosecuted to make people “stop and think”.

Sam Stanisstreet, who farms with his wife Zoe, said dog worrying incidents were not uncommon as he is a tenant with 200ha (500 acres) in a country park which welcomes more than one million visitors a year.

But despite reporting dozens of incidents to the police over the 27 years he had been on the farm, none had ever gone to court.

“We’ve always logged all incidents and reported them to the police, but we’ve never seen a prosecution,” he said.

“I’d like to see this result in a prosecution, which makes it into the newspapers, so people stop and think.”

Mr Stanisstreet said he did not personally witness the horrific incident which resulted in a spring-born lamb being forced off the cliff when a loose dog chased it to the edge at Seven Sisters Country Park, near Seaford in East Sussex on Saturday (20 June).

“I’d like to see this result in a prosecution, which makes it into the newspapers, so people stop and think.”
Sam Stanisstreet, East Sussex farmer

However, the whole thing was caught on camera by a passer-by who passed his photographs to the Stanisstreet family in order to help them find the owner of the dog.

The photographs show how horrified walkers could only look on as the dog chased two distressed lambs to the edge of the cliff forcing one off the edge and down into the sea below.

The other lamb which had been cornered, fortunately managed to break free and rejoin the rest of the 70 ewes and 100 lambs that were grazing in the field.

The photographs have been shared more than 12,000 times on Facebook, along with a plea for the “irresponsible” owner of the dog to be named and shamed.

Mr Stanisstreet said the field was the only one on his farm without any fencing along the cliff edge, but sheep normally kept well clear.

“The only positive thing out of this incident is that the guy took the pictures and shared them with us. For the first time we decided to share them on Facebook and Twitter and thousands have now seen them.”

Sussex Police said footage of the incident is being viewed as part of their investigation under the Dogs (Protection of Livestock) Act 1953.

Wildlife officer PC David Tourell said: “Its so sad when you hear of incidents like this. Dog walkers need to be reminded of their responsibility to keep their pets under full control whenever there is livestock present.

“We take reports of sheep worrying seriously with previous incidents leading to court and hefty fines.”

Mr Stanisstreet told Farmers Weekly the problem of dogs attacks on sheep was so significant in the south east of England that earlier this year he organised a meeting to discuss it.

Sheep worrying had a huge impact on his family’s lifestyle, he added.

He was frequently called to deal with incidents and then he had to spend time on the phone afterwards talking to the relevant authorities.

Dealing with distressed or dead sheep was emotionally draining too.