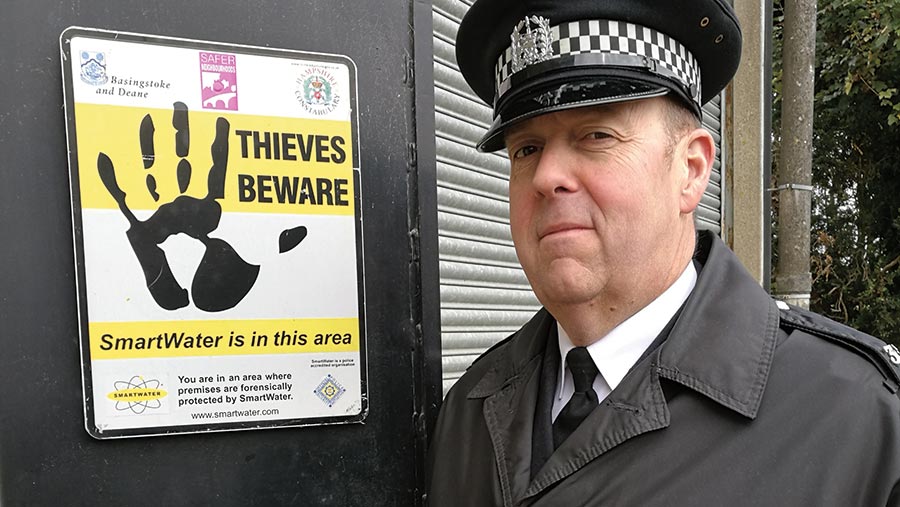 Rural crime is reaching new levels across the country, with machinery and livestock theft, burglary and vandalism topping the list.

NFU Mutual puts the cost of rural crime in the UK at £42.5m/year (based on the latest figures published in 2015).

Reporter Philip Case headed off to Hampshire, which is bucking the national trend, seeing a fall in rural crime last year of 29%.

He joined PC Andrew Reid and some of the local farmers to find out what is being done to cut the risk of countryside crime.

With its combination of rolling fields, small villages and isolated farms, north Hampshire presents a tough challenge for police officers.

PC Andrew Reid is the area beat officer for north Hampshire, covering an area from Whitchurch to Hook.

He says poaching, hare coursing, fly-tipping and theft of farm tools and machinery – especially vintage tractors – are particular issues in the area.

Illegal hare coursing is a particular problem in the area, says PC Reid.

“People will travel for miles to take part in this crime. Only last week we had a vehicle come down from Buckinghamshire.

“The fields here are large. You have high points and you can see right across. But, thankfully, many have flints, which the dogs don’t like because they can cut their paws – so they are less inclined to run. Sadly, it doesn’t stop the vehicles.”

Farmer Angus Jannaway, based in Upton Grey, a village near Basingstoke, is a typical victim of rural crime in the region. He has suffered instances of illegal hare coursing and machinery theft.

He says hare coursers and joyriders were making his life unbearable, so he decided to dig trenches around his fields to prevent access to his land.

“We have had enormous trouble with members of the community going through the hedges and riding round the fields,” he explains.

“We had a single-furrow forestry plough made in Scotland, which I commissioned to dig trenches. Other landowners have been hiring us to go round the farms and do their fields.”

Mr Jannaway says the trenches have kept trespassers off his fields. But criminals are still targeting his farmyard.

Last year, a ram-raiding gang smashed their way into his shed overnight and stole £7,000-worth of tools.

“They just stole every single tool we had. Every chainsaw, every strimmer, everything just disappeared,” he says.

In response, Mr Jannaway now keeps his tools locked away in a steel chest, in a bunker behind a steel door.

Internal roller doors, CCTV and lighting also protect the building. Incredibly, Mr Jannaway has added an extra layer of security by investing thousands of pounds in concrete barriers around his farm to prevent intrusion. 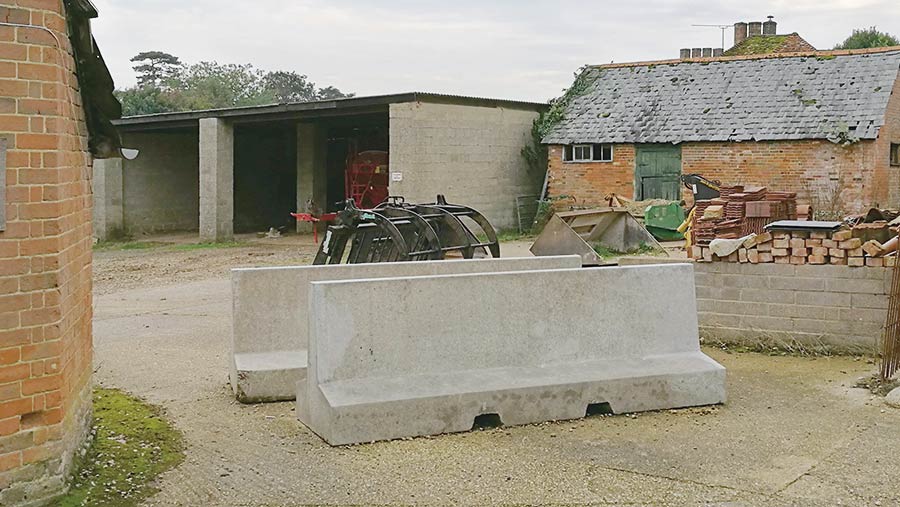 “There is nothing more we can do. It’s like a fortress,” he says. “The downside is that it takes time if you want to get a spanner out of the workshop.”

Alan Hutton, who farms in a neighbouring village, had his John Deere tractor stolen in September 2012.

PC Reid says the thieves parked the tractor under power cables on an old military site in Arborfield, believing the cables would interfere with the tracking signal.

However, officers were able to recover the tractor and return it to Mr Hutton, largely intact. 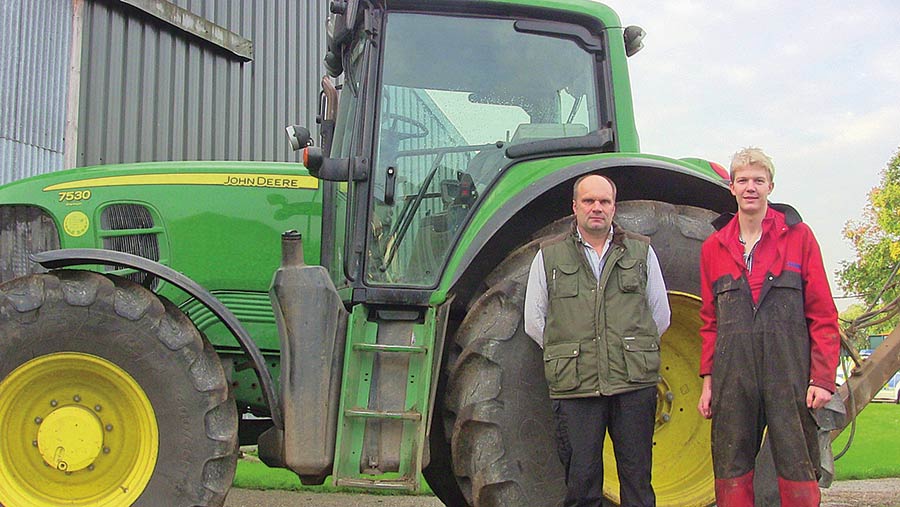 Tractors were being stolen to order, transferred into shipping containers at ports such as Southampton, ready to be sent abroad. They were being driven in lorries to Poland and other eastern Europe countries to be sold for cash.

“In certain countries they are going to in Europe the fields are smaller, so [these tractors] are ideal.”

Mr Hutton believes a “layered approach” is the best way to prevent theft of farm machinery.

“All our tractors are always kept inside, if possible,” he says. “Some, such as the JCB, are barricaded behind an older tractor, so they have got to get two machines out.

“We lock and bolt everything. A steel barrier with inverted locks protects our farm shed.

“If you’ve got CCTV, put a sign up. You’ve got to look after yourself. The police cannot do everything. They don’t have the resources any more.”

Darren Ivy, who manages a farm in the Candover Valley, near Basingstoke, has installed CCTV above his farm buildings.

“It records any movements on a 2GB memory card, which lasts more than a fortnight,” he says.

But Mr Ivy thinks there is no substitute for the eyes and ears of his local beat bobby.

“PC Reid controls all the crime around here. It’s definitely noticeable – no two ways about it,” he says. “He knows the area. His physical presence also helps deter criminals.

“If we haven’t got our local bobbies, which we all vouch for, what’s the world going to come to?”

Farmers must report every instance of crime on their land – no matter how small or large, says PC Andrew Reid.

A recent survey of 17,000 farmers in England and Wales carried out by the National Rural Crime Network found more than one in four (27%) fails to report crime.

“The police need to know what is happening, when it’s happening and if there is any pattern to it,” he adds.

“We appreciate that police may not investigate everything that comes through.

“But it still needs to be recorded that an incident has happened on farms. It may well be linked with other crimes.”

Rural criminals are monitoring farms around the clock to see what they can steal, says Mark Wilson, a senior agent at the NFU Mutual Basingstoke agency.

Ahead of the winter months, Mr Wilson is advising farmers to ramp up security measures in a bid to tackle the increased risk of crime.

Typically, rural criminals will “scout” farmyards during the day before coming back to steal items at a later date.

“They will come on to your farm claiming they have lost their dog, selling tarmac, buying batteries or asking for directions,” he says.

At night, the last thing they want is to be seen, which is why Mr Wilson recommends farmers install automatic lights and/or CCTV.

“The sooner you can prevent them even having a look in your yard, the better.”

Mr Wilson says passive infrared (PIR) motion detection cameras can be bought for as little as £100.

“They take a photo and send you a text message, which will allow you to react immediately,” he adds.

Mr Wilson has got together with groups of farmers to secure farm equipment using the Datatag/CESAR protection marking scheme.

“If you club together and do 20-30 machines at once, you can get a cost reduction,” he says.

“You are less likely to have your vehicle stolen if it has a CESAR tag – and if it is stolen, it’s more likely to be recovered.”

The NFU also offers a 12.5% discount to insure farm machinery that has been CESAR-tagged. Beyond this, Mr Wilson recommends Thatcham-approved tracking devices on vehicles.