A Wiltshire farming couple has described the stress and anguish caused by the appearance of a spectacular crop circle on the land they farm near Swindon.

Shelley and Hardy Klindt manage 283ha of arable and livestock land, plus livery stables, for a landowner at Bydemill Farm, Hannington. 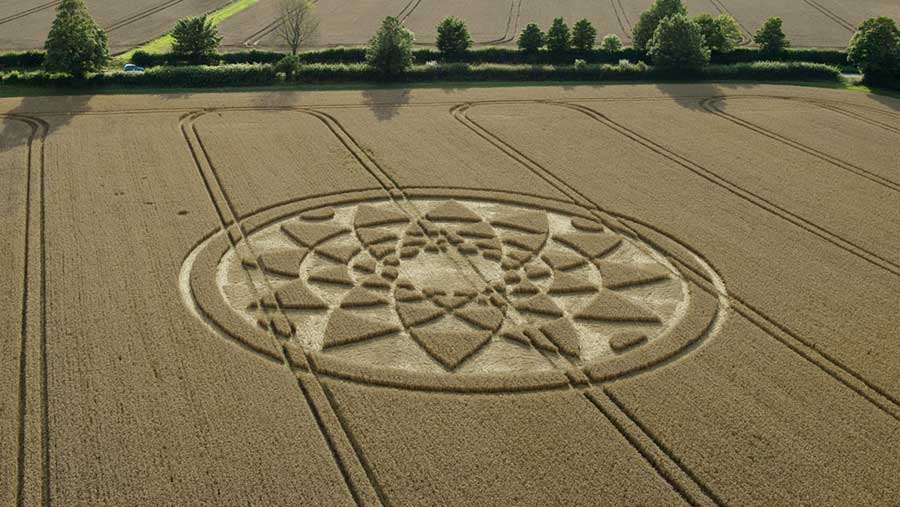 “The first we knew of it was when I noticed a gate was open into one of our wheat fields on 4 August,” Mrs Klindt told Farmers Weekly.

“We usually use a hole in the hedge about 800 yards further on to access the field, so we knew we had been broken into.”

The Klindts are convinced the creation, which has attracted hundreds of visitors, is manmade.

“We have spoken to our local policeman at the rural crime department. We had actually caught a guy near the circle soon after we had discovered it, filming it with a drone and the policeman said he knew the man and it is a scam.

“They do it in an area that can’t be seen from the road, so they can get there first and take the drone images which they then sell and put on their websites.”

Mrs Klindt said they had hoped to keep the crop circle secret, but then it went viral online and there were lots of people coming.

“Our first idea was to mow it, as we’d had enough. We had drones flying over our house and helicopters scaring the horses.

“But we decided not to as they would only go and make another circle in a neighbouring field.

“So in the end we’ve organised family and volunteers to go and sit in the field and put up signs to make sure people walk down the tramlines and not across the rest of the crop.”

The crop circle is about 60m wide and covers about two acres of quality milling wheat. “It was a perfect crop, but we’re told that’s what they look for as any weeds stand up and ruin their patterns.”

Mr Klindt estimates the crop loss will come to about £1,000, but says he won’t know for sure until the field has been combined and the yield is calculated.

As well as signs urging people to avoid causing further damage, the Klindts have put a bucket in the field, asking for donations to help offset some of the crop loss. Money has also been left in the centre of the circle.

Mrs Klindt says it has attracted all sorts of “loonies”. “We’ve had white witches burying crystals in the ground and last Saturday night we had 12 people sleeping in the circle believing it was connected to a meteor shower.”

Overall, the Klindts say the circle has caused a lot of stress. “We don’t really need this at harvest. Were it not for the volunteers, we’d have been running around like lunatics.”

The crop is due to be harvested on Friday (18 August).

Rural crime officer Marc Jackson of Wiltshire Police acknowledged the “huge negative impact on hardworking landowners and farmers” and reiterated that creating a crop circle is criminal damage and an offence.

“The damage caused means a loss in revenue to the farmer and landowner. They also have to deal with civil trespass issues on their land after a crop circle has been created.”

He urged affected farmers to report any crop circles via 101. “If you witness someone making the circle, this can be reported via 999 as a crime in progress,” he added.

“And if you do not wish to have visitors to the crop circle, you can cut out the circle or register that no permission has been given.”

Commercial operator Steve Alexander (whose image we have used) says he has been photographing crop circles for 25 years and has not seen any evidence at all that they are manmade.

The complexity of the designs and short timeframe in which they appear suggest to him there may be other forces at work. “I have an open mind,” he told Farmers Weekly.

He also doubts the involvement of “scammers” and suggests the “enthusiasts” who take drone footage are doing so more from the buzz they get from sharing their images and getting there first.

“I can see that drone operators being there early might appear suspicious. But if they attempted to sell drone images, they would be breaking the law,” he said. “The amount of money they could make is limited. It does not wash.”

Mr Alexander’s pictures were taken from a commercial helicopter on 10 August – a week after the Hannington crop circle first appeared.