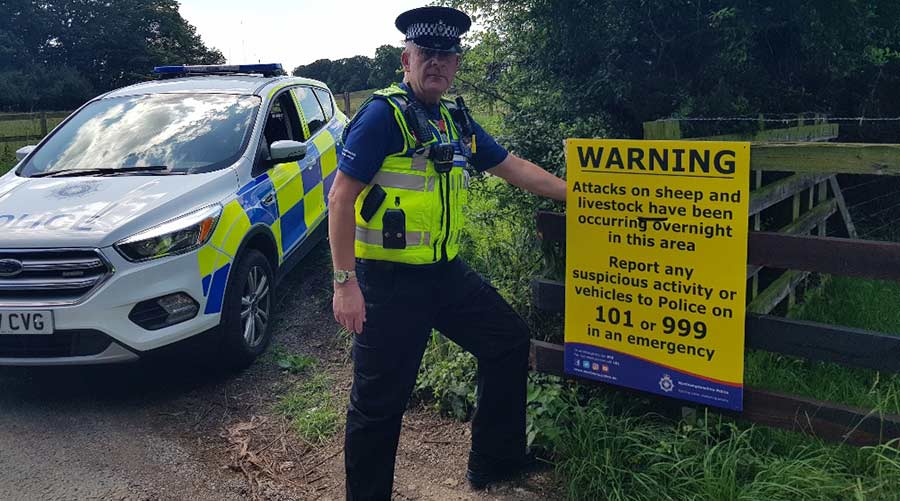 Police have issued signs to farmers and landowners in Northamptonshire urging them to report suspicious activity following a series of horrific sheep butchery incidents.

Since March, it is estimated that around 150 sheep have been illegally slaughtered on farms in the county.

Last month, attacks spiked with dozens of sheep butchered for their meat on farms in Crick, Whilton, Rushton, Clipston and Kelmarsh.

Similar attacks have taken place in Leicestershire and Warwickshire. In the latest incident on Monday (19 July) a livestock farmer discovered the remains of nine sheep on land off the A5 Magna Park area on the outskirts of Lutterworth.

A spokesman for Leicestershire Police said the sheep were killed sometime between 4.30pm on Sunday and 8.50am on Monday (29 July). No arrests have been made.

Police say an organised criminal gang is operating in the Midlands and it has been targeting sheep since the beginning of the year.

The gang appears to have butchery skills. Typically, sheep or lambs are hung up, have their throats slits and the meat is removed with the remains left behind.

In Northamptonshire, officers who have been distributing warning signs to farms urging people to be vigilant, say they have been well received. The signs have been funded by the Office of the Police, Fire and Crime Commissioner.

Police and the NFU are urging farmers to report suspicious activity on 101 or 999 in an emergency.

James Peck, spokesman for NFU East Midlands, said: “These are unprecedented, horrific crimes being carried out by an organised gang of criminals who appear to have an operation with an outlet to sell this illegally slaughtered and stolen meat.

“Those farmers who have been affected are devastated and the wider farming community is extremely concerned at the scale of the problem. We’re calling on local farmers to be the eyes and ears of the police and report anything suspicious.”

He added: “There is a real risk to human health from eating meat from carcasses processed outside of a licensed abattoir which has not been inspected by a vet and meat hygiene inspector.

“We’re urging shoppers to buy meat from a recognised source – and the best way of doing that is by looking out for the UK health mark and the Red Tractor logo, which means the product is traceable, safe and farmed with care.”

* A 40-year-old Hampshire man arrested on 24 July on suspicion of criminal damage and theft as part of the investigation has been released under investigation.