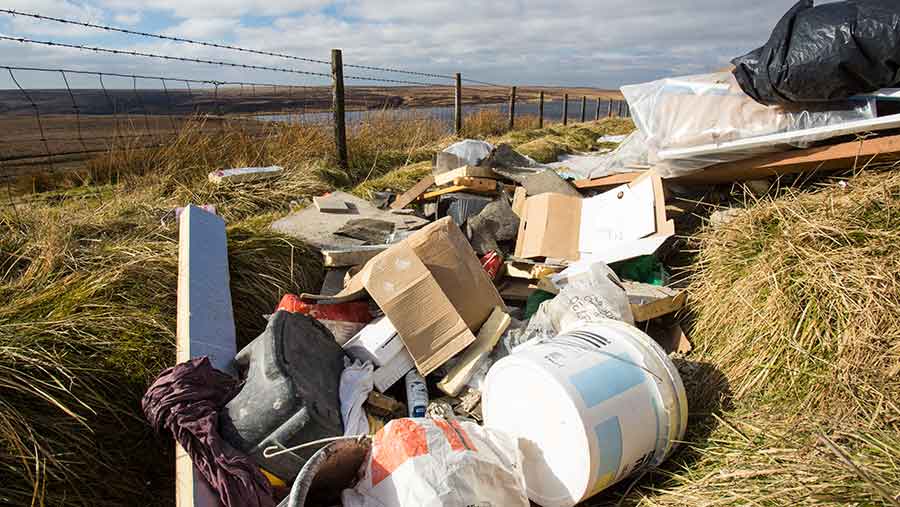 Farmers and landowners are calling for stronger legal action to help prevent an increase in fly-tipping that is blighting the countryside.

Figures released by Defra today (2 March) show incidents of illegal waste dumping reported to and cleared by local authorities increased by 4% to 936,000 in 2015-16, incurring a total cost of £50m.

However, action taken against the culprits has fallen by 4%, with 494,000 enforcement actions at a cost of £17m.

The Defra figures also show that two-thirds of cases involved household waste (up 6.5%), with public highways (50%) the most common place to fly-tip waste. There was also an 8% increase in the incidents of fly-tipping on footpaths and bridleways.

However, the Country Land and Business Association (CLA) says the figures do not reflect the true scale of the crime because fly-tipping on private rural land is not included.

CLA president Ross Murray said: “Local authorities tend not to get involved with clearing incidences of fly-tipped waste from private land, leaving the landowner to clean up and foot the bill.

“Our members have reported a big increase in fly-tipping on their land. It’s not just the odd bin bag, but large household items – from unwanted sofas to broken washing machines.

“Farmers and landowners are forced to clear up somebody else’s rubbish or they risk prosecution for illegal storage of waste. This is simply not right or fair.

“Only when people see evidence of local authorities taking stronger action to combat the scourge of fly-tipping can we hope to see a reversal in this worrying trend.”

The NFU has also stepped up the pressure for stricter penalties.

NFU president Meurig Raymond recently wrote to justice secretary Liz Truss, calling on her to make magistrates more aware of the fines and prison sentences at their disposal.

Maximum fines were raised from £50,000 to “unlimited” in 2015, but the Sentencing Council’s guidelines have not been updated. Prison sentences of 12 months are also available.

A similar letter was sent to the National Police Chiefs’ Council and the Association of Police and Crime Commissioners, asking for a redeployment of resources to tackle rural crime.

The subject was also raised repeatedly at the recent NFU conference in Birmingham.

Will Dickinson, regional board chairman for East Anglia, pointed to the inadequacy of the penalties for fly-tipping. “It is not widely known that 95% of fines for fly-tipping are for less than £1,000,” he said.

One rare court case taken last year by the Woodland Trust had resulted in a fine of just £200. “That is £100 less than it would have cost that man to hire a skip,” said Mr Dickinson.

“What we need are punitive, exemplary fines. We must make sure the people who do this don’t see fines as an occupational hazard, or frankly an irrelevance.”

Farmers and landowners can also help prevent fly-tipping on their land by ensuring gates to fields are locked. They should also open up concealed entrances so they are more visible to passers-by, use CCTV in black spots and report all instances of fly-tipping to the local police force.