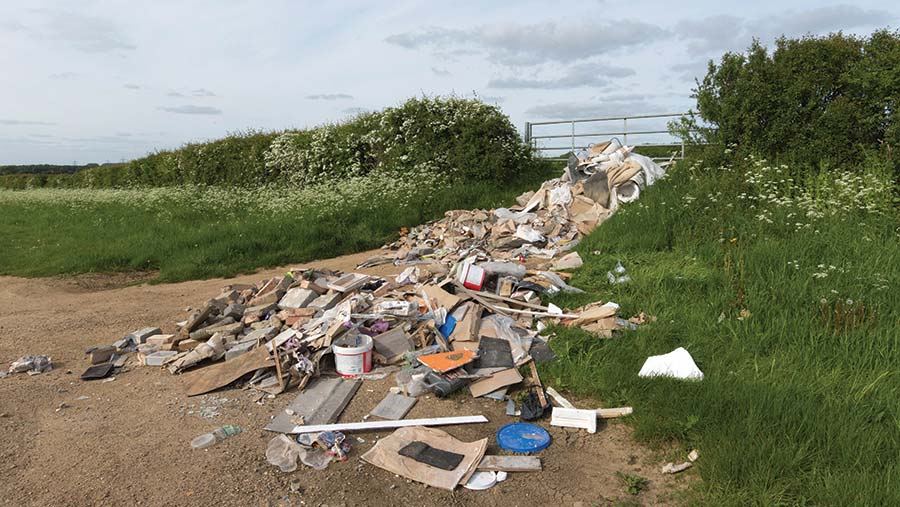 Rural fly-tipping incidents have soared following the closure of council tips due to coronavirus, with more people dumping waste on farmland and country lanes.

The Countryside Alliance said incidents had surged by 300% in some areas – with an unacceptable impact on rural communities and the countryside.

Fly-tipping was not a victimless crime, it added – costing private landowners upwards of £47m a year to clear up waste.

Farmers across the country vented their frustration on social media as tonnes of waste were dumped in gateways and by roadsides over the Easter Bank Holiday weekend.

Much of it was reported to include household rubbish and DIY materials from people redecorating their homes during the lockdown.

NFU deputy president Stuart Roberts said: “We’re hearing from many of our members that their fields are being bombarded with rubbish that’s being illegally dumped there. We believe this is due in part to the closure of local authority household waste and recycling centres.”

Government ministers were aware of the issue and had recommended that waste and recycling centres stayed open, Mr Roberts said.

“The NFU is also urging all local authorities to take notice of Defra’s recently published guidance on prioritising waste collection services during the lockdown,” he said.

In Scotland, rural and environmental organisations issued a joint statement urging people to act responsibly and not be selfish. Signatories included NFU Scotland and the Scottish Partnership Against Rural Crime.

The statement said: “At a time when farmers are working around the clock to provide food for the nation and trying to keep their businesses running despite being short staffed, it is heartbreaking to see their land being used as a giant tip.”

It added: “We are pleading with people not to be selfish. Now is not the time to try and get rid of items following a spring clean or DIY project.

“We are urging you to keep them at home until recycling centres re-open and charities begin to collect furniture and clothing again.”

The Local Government Association, which represents local councils, said: “Fly-tipping is never acceptable and we urge people and businesses not to burn garden waste – composting or recycling it where possible is better for the environment.”

It added: “Burning household waste is an offence and liable to prosecution.”

Merseyside farmer Olly Harrison has been the victim of persistent fly-tipping at Water Lane Farm, Prescot, since household waste and recycling centres closed because of coronavirus. 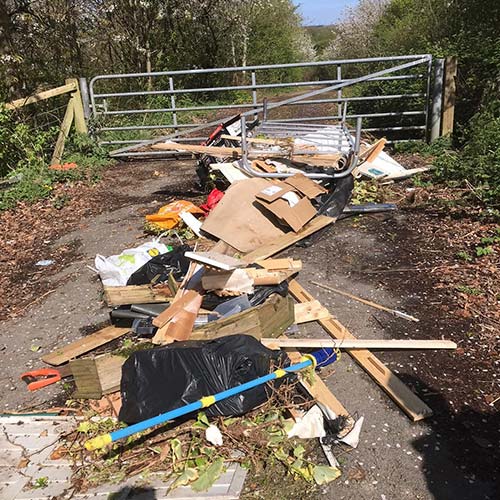 Some of the rubbish dumped at Water Lane Farm

The problem is being tackled by the Joint Unit for Waste Crime – a new government taskforce that brings together police and environmental bodies.

“This is organised crime,” said Mr Harrison. “I’m pleased the Joint Unit for Waste Crime are going after the organised gangs profiteering from this crime. If you stop the gangs, the problem will reduce significantly.”

Problems are being exacerbated by a lack of green bin collections in the region.

NFU Lancashire county chairman Lisa Edwards said: “We have had five bags of green waste dumped at the end of our road. I fear this is just the beginning of things to come.”