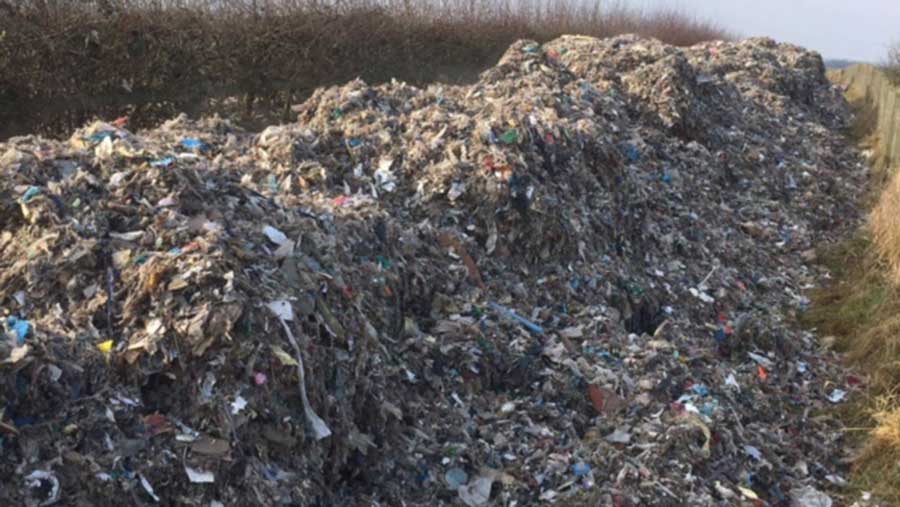 Farmers need to rise up and work together to tackle the scourge of fly-tipping, which is blighting the countryside.

That’s the view of farmer Graham Walker, after he became the latest victim of a fly-tipping epidemic in north Staffordshire.

Mr Walker, 60, was left stunned after 39t of shredded plastic waste was dumped at Lower Manor Farm in Draycott on the evening of Wednesday 8 February.

The rubbish appears to have already been put through a waste treatment facility, with items of recyclable value such as glass and wood removed.

Because the waste was dumped on private land, Mr Walker has had to pay for the removal. The clean-up operation has cost him about £6,000.

“I’m really upset about it. These people don’t care, do they?” he told Farmers Weekly.

“Luckily, I have other business interests as there is no money in farming. But if I had just been farming this would have been an absolute disaster.

“It feels like a liability owning land. There is no margin in it.”

Mr Walker said whoever tipped the waste cut a padlock first and bent the farmgate with a lorry to access the field.

After the fly-tipped mess had been removed, Mr Walker spent Friday (17 February) cleaning the debris left in the field.

To prevent any further fly-tipping incidents, he has laid four 1.5t concrete slabs on the farm track to block entry to the field from the A50 road.

Mr Walker said officers from the council and Environment Agency told him they have a good idea who is responsible for dumping the waste.

But he added: “The police have told me nothing. They said you cannot catch these people. They use hired lorries to disguise themselves and unless you catch them in the act, you’ve got no chance.”

“The only way you can catch these people is by getting together and patrolling from 8pm at night,” he said.

“There have been 27 serious fly-tipping incidents in this area since just before Christmas. It’s one incident after the other and it’s not just going to go away.

“I also think new laws should be introduced to track every lorry from the dustbin to the dumping site.”

A Staffordshire Police spokesman said: “We received a report just after 2:15pm on Thursday 9 February of fly-tipping on a footpath bordering the A50, just off Cresswell Old Road, Cresswell, Stoke-on-Trent.

“Shredded plastic, about 60m wide and reaching about 8ft in height was dumped at the location overnight. Contact was made with Staffordshire Moorlands Council and they are dealing with it.”

Following a recent spate of fly-tipping incidents in the area, a multi-agency group including police, the fire service, councils, the Environment Agency and the Highways Agency, has been set up to tackle the crime.

A spokeswoman for Staffordshire Moorlands District Council said the council was aware of the incident and was working with the authorities to try to identify those responsible.

An Environment Agency spokesman said: “We’re making investigations following reports of shredded waste being dumped on private land in the Cheadle, Staffordshire, area. We’re also providing advice and guidance about how this waste can be removed safely and legally.

“Everyone has a part to play to help crack down on waste crime. If you suspect someone is disposing of your waste illegally, or you want to alert us to other illegal waste operations call our Incident Hotline on 0800 80 70 60 or Crimestoppers anonymously on: 0800 555 111 or alternatively use the online form at www.crimestoppers-uk.org”

2.     Work with neighbours, your local Farm Watch group, police and the council  to monitor fly-tipping in your area.

3.     Set up a WhatsApp group with local farmers to circulate information about fly-tipping activity.

4.     Install CCTV and improve lighting on farms to deter fly-tippers.

5.     Make sure gates are locked and closed when not in use.