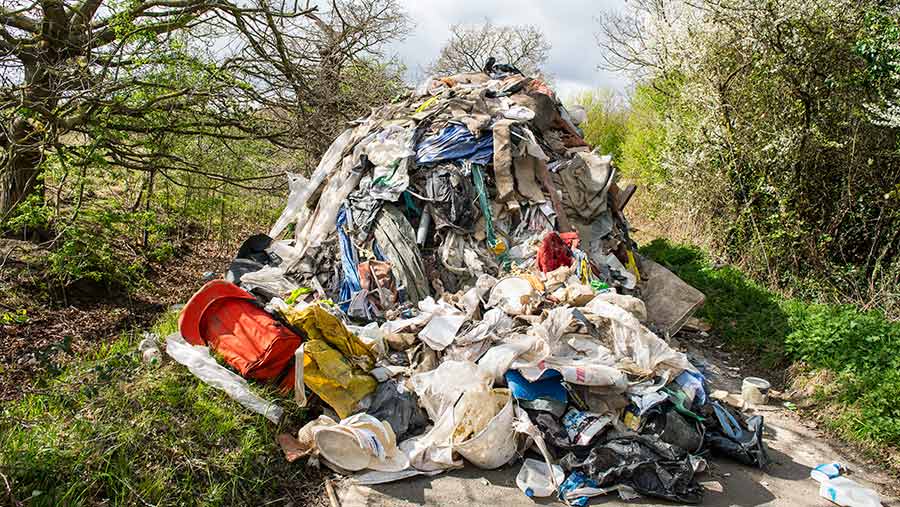 Farmers Weekly is launching a major campaign this week to tackle the illegal dumping of rubbish on our farms with the strapline “Stop the Blot: Fly-tipping is ruining our countryside”.

The UK is blessed with some of the most beautiful countryside in the world, but our farms are being spoiled by rubbish dumped by unscrupulous operators in farmyards, gateways, rural lanes and fields.

Previously, incidents of fly-tipping on farms were mostly small scale, blamed on rogue traders and the “white van man”.

These incidents continue to blight farms and they have been linked to more councils charging to deposit certain types of rubbish, such as soil, rubble and asbestos.

However, the scale of fly-tipping on farms in recent months has shot up.

Ruthless gangs of organised criminals situated on the urban fringes of London or Birmingham, for example, are targeting farms that are easily accessible from motorways and dumping lorry-loads of waste to avoid costs.

Landowners including Shropshire farmer Andrew Nicholls and the Enville Estate in Staffordshire have been targeted in the last month – and they face bills running into five figures to clean up the mess.

“As a victim, you do feel like you are on your own. Anything that raises public awareness of fly-tipping in rural areas and on farms is an excellent proposition.

“The reality is, if you have got a track, woodland, or anything hard-standing, you are going to be targeted at some point.”

Councils across England recorded 936,090 cases of fly-tipping in 2015-16, with the clean-up bill costing £49.8m. But the Country, Land and Business Association (CLA) says the figures do not reflect the true scale of fly-tipping on farms as they do not include rubbish dumped on private rural land.

Our campaign will reveal the reality behind fly-tipping on farms, including the impact and extent of the crime on businesses, the cost and the effect on the environment and hazard to livestock.

We will seek to:

We will also provide advice for farmers on prevention as well as the steps to take if you become a victim.

The CLA, which has been actively lobbying against fly-tipping for over a decade, has expressed support for our campaign.

CLA president Ross Murray said: “We want action taken on this anti-social behaviour because being forced to clear up somebody else’s rubbish or risk prosecution for illegal storage of waste is simply not right or fair on farmers and landowners.”