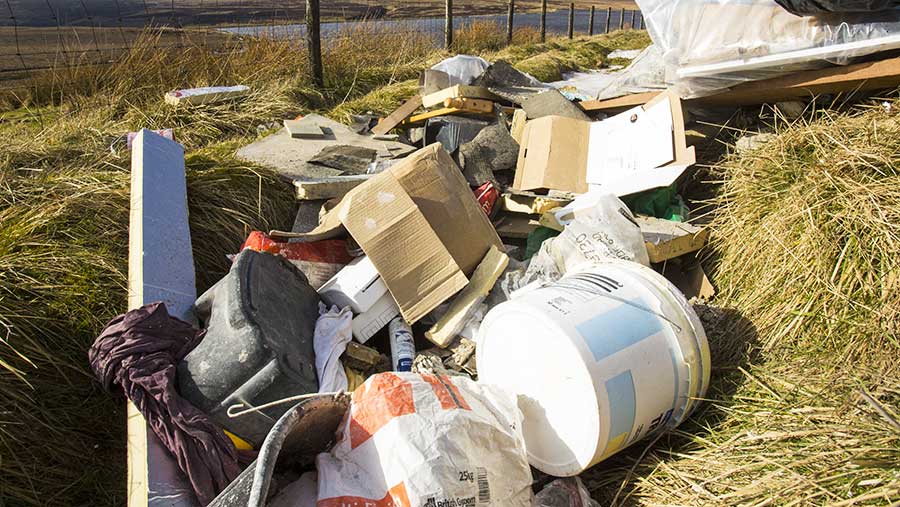 Fly-tipping affects just under two-thirds of farmers and landowners, according to a Farmers Weekly survey.

The online survey, carried out in July in association with CLA Insurance as part of Farmers Weekly’s Stop the Blot campaign, lays bare the crisis that criminals dumping rubbish in the countryside is causing.

It also highlights the growing sense of frustration among landowners over the government’s approach to tackling the epidemic.

More than half of the 1,197 respondents (52%) said they believed fly-tipping was a significant issue in their area. Most victims said they had been targeted on multiple occasions, typically two to three times a month.

The survey also found fly-tipping was more common on large farms, with 79% of 500ha+ holdings describing it as a “significant problem”.

The government’s littering strategy, which sees councils charging householders to dispose of certain types of waste at the tip, such as soil, rubble, plasterboard and cement bonded asbestos, was also blamed for contributing to an increase in fly-tipping on farms.

“I think part of the problem is the restrictions, cost and paperwork associated with disposing of waste legally,” said one farm owner in Northern Ireland.

“Council policies don’t help by asking people to sort rubbish or pay to use a dump.”

Reduced opening hours and restricted access to sites for vans and trailers at household recycling waste centres, were also highlighted as issues.

One farmer who runs a 500ha estate in the South West summed up the frustrations of many.

“In my experience, the landowner suffers cost, nuisance, operational disturbance and general worry on each and every occasion.”

Our investigation uncovered anger over current laws on fly-tipping, which penalise farmers.

Most councils pay the costs for clearing waste from highways. But farmers are responsible for removing waste dumped on private land, and can be prosecuted if they fail to do so.

Two-thirds of those surveyed told us they had incurred costs for the clean-up, with the average cost per incident amounting  to £844.

However, some farmers who have been repeatedly targeted said they had spent more than £10,000 tackling the problem over 10 years.

The fear of fly-tipping is also high; two in five farmers (41%) said they were very concerned about becoming victims.

Despite this, the vast majority have not insured their business against fly-tipping – with just one in eight covered by an insurance policy.

I think the current law is unjust. As a farmer, I am liable for potentially very large costs of clearing up waste as a result of someone else’s criminal activityTenant farmer, East Anglia

Two-thirds said they had reported fly-tipping incidents, most likely to their local authority. But only about half of those who reported it found the response to be effective.

More than two-thirds affected by fly-tipping said they reported incidents.

Of these, three-quarters said they told their local authority, 18% informed the police and 2% got in touch with the Environment Agency. Five per cent said they reported incidents to other organisations.

The bigger the size of the farm, the more likely farmers were to report incidents; 76% of larger farms said they reported incidents, whereas nearly half (48%) of small farms admitted they did not contact the authorities.

The reason most gave for not reporting offences was a lack of action to catch those responsible.

If councils didn’t make it so difficult for commercial vehicles to use their waste facilities, the problem would be greatly reduced Farm owner, 200-499ha, South East

Most victims reported being frequently targeted with small-scale incidents of fly-tipping.

Respondents were asked how often their farms had been targeted by fly-tippers over the past 10 years; 40% said two to five times, 28% said six to 10 times, 27% said more than 10 times and 5% said just once.

Some farmers and landowners said they were being targeted repeatedly every month.

Fly-tipping is a serious criminal offence, which carries an unlimited fine and/or up to five years in prison.

But our survey found widespread concern that fly-tippers are being let off too lightly.

Four out of five said offenders should be made to clean up their own waste. While 69% said fly-tippers’ vehicles should be confiscated.

There was also widespread support for fixed penalty notices with fines, and custodial sentences for more serious cases.

“Convicted tippers need to be made to compensate all identified victims by the courts,” said one farm manager in the North East.

A young farmworker in the South West said: “Fine and order them (offenders) to remove their waste initially. If they are caught again, give them a larger fine and confiscate their vehicle.”

However, farmers criticised the police and local authorities for failing to do enough to catch the culprits. Only, 4% of cases had led to a successful prosecution, they said.

“The police have little interest. The local authority is happy to say ‘it’s on your land, you deal with it’ and the Environment Agency says ‘we haven’t any money’,” said one victim in eastern England.

Eighty-five per cent of people surveyed said they had taken measures to protect their land against fly-tipping.

The two most popular measures were installing gates / barriers and padlocks on entrances.

More than half indicated they had joined a Farm Watch scheme, or work with neighbours to share information on fly-tipping. This was found to be a more popular measure among smaller farms.

More than one-third said they now have to block gateways with heavy objects, which means access in and out of farm fields take longer. “Placing heavy objects is not an option when the entrance is regularly used,” said one farmer.

This research provides vital insight into the scale and nature of the fly-tipping problem.

The CLA will be using the data in ongoing work with national and local authorities to raise awareness of the scale of the problem and to put in place the laws, policies and partnerships needed to confront this problem.

We need action at local and national level. Fly-tipping comes in a number of forms, from the one-off opportunist to serious organised criminal networks.

The government must assemble a full national picture and use it to co-ordinate all agencies to target and deter offenders at all levels.

We also need a new combination of high-profile enforcement and public education about the very real harms that fly-tipping causes to businesses and the environment.

However, farmers also need to take action to protect themselves. This research shows victims are targeted again and again. Installing gates, surveillance and better lighting can have a big impact.

If possible get involved in local partnerships. Undertaking sensible precautions can make all the difference to not being a victim.

Only through co-ordinated and collective effort can we push back against this scourge that is damaging our homes and livelihoods.

Thanks to the CLA, whose sponsorship made it possible to run this survey. Farmers Weekly had full editorial control of this report.