Two-thirds of farmers and landowners are hit by fly-tipping each year, according to research by Keep Britain Tidy.

That’s a staggering statistic, but sadly one which will not come as a surprise to many people.

In England alone, nearly one million fly-tipping incidents were recorded in 2015-16, according to Defra statistics. That’s the worst figures ever recorded and a 4% increase on 2014-15. 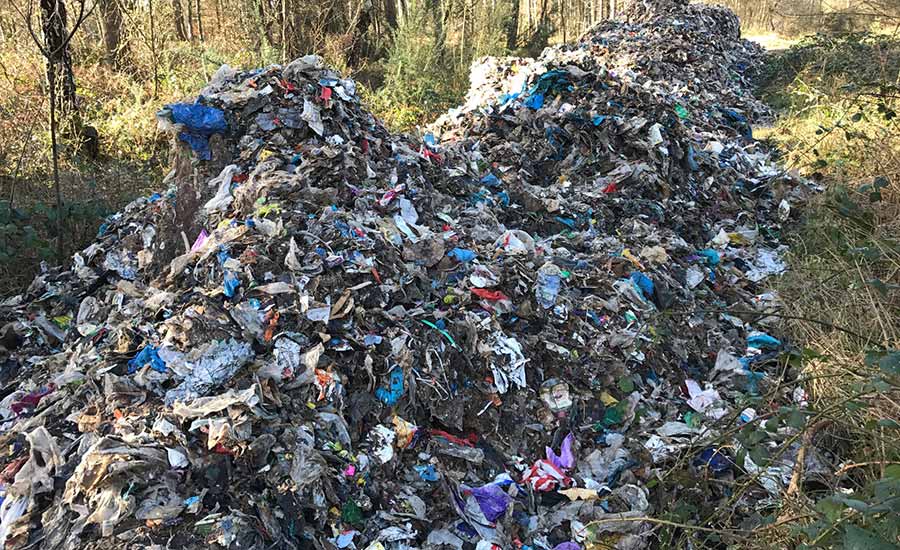 For many farmers, however, the lighter evenings mean lorry-loads of rubbish heading their way to be dumped in fields, gate entrances and lanes.

Piles of fly-tipped waste can be costly and time-consuming to remove. It can be dangerous to human health and livestock, damaging to wildlife and, in some cases can pollute watercourses and contaminate land.

The response of the government, local authorities and the police to fly-tipping is disjointed and laws in this area are confusing.

When a fly-tipping incident occurs on private land, under the Environmental Protection Act 1990, it is the landowner’s responsibility to remove the illegally dumped waste. It should not be the sole responsibility of the landowner to deal with this crime, but as the law stands, it is.

Unless the landowner is insured, the clean-up bill can run into tens of thousands of pounds.

Rogue traders who dump rubbish on farms to avoid paying a disposal fee at the council recycling centres is an ongoing problem, which appears to have escalated since councils started charging to dispose of items such as bricks, soil, rubble, plasterboard and asbestos.

However, in recent months anecdotal evidence suggests large-scale, serious organised dumping on farms is increasing, especially on the fringes of urban areas with easy access to motorways. 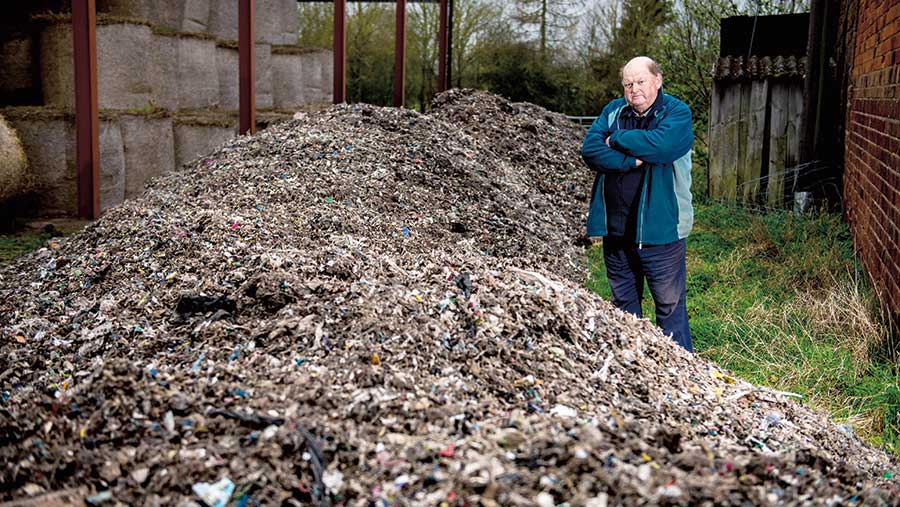 Waste criminals struck under the cover of night, dumping an estimated 100t of shredded waste in his farmyard.

The brazen crooks cut the padlock and chain off his gate and dumped seven lorry-loads of shredded waste. They even had the audacity to secure the gate with a cable tie before they left.

“If the waste is dumped on your land, the authorities don’t seem to care,” says Mr Nicholls, 70.

“I reported the incident to the police and all they were interested in was the fact the lock and the chain had been cut off. I would have said it was aggravated trespass.

“The local council is not very sympathetic. Their attitude is: ‘It’s your property, it’s your problem’. But it’s not my waste, I haven’t generated it.

“The Environment Agency sent out two enforcement officers to examine the mess and take photographs. I haven’t heard any more from that.”

Mr Nicholls estimates it will cost him up to £18,000 to remove the waste – wiping out nearly all his single farm payment.

“If it happens again, it will ruin me. It really will,” he says. “Until it happens to you, you do not realise exactly what’s involved.

Mr Nicholls says police believe organised criminals are shifting waste out of the Birmingham area and farms and woodlands are an easy target.

Three days after Mr Nicholls’s farm was hit, 15 miles away and over the border in Staffordshire, fly-tippers targeted Enville Estate, a 2,630ha estate near Stourbridge.

Two men in a Vauxhall Astra kept watch a lorry dumped the waste. A passerby disturbed the men, who got out the car and chased him. He had attempted to take photos of the men swapping the number plates on the lorry.

“It’s an eyesore. It’s bad for the environment and because the mound is in the wood, it’s a fire hazard as well.”

Farmers in the area have started to place wooden stumps and concrete barriers in front of gateways to prevent access by vehicles.

“If they need to get into fields, they need a telehandler to remove them, which means more man hours and disruption to their farming.”

In Essex, outside London, farmers and landowners feel under siege from fly-tippers, who they have dubbed the “trash mafia”.

At the NFU Conference in Birmingham in February, farm leaders said there had been 116 cases of industrial fly-tipping since September.

Anna Simpson, NFU environment policy adviser, confirms there has been anecdotal evidence of a recent increase in the severity of fly-tipping incidents on farmland.

She says the union is concerned that 95% of the sentences handed out for convictions are fines of less than £1,000.

The union is concerned  courts are not using new powers, introduced in 2016, to impose unlimited fines and prison sentences up to five years for fly-tipping offences.

The NFU has written to justice secretary Liz Truss, the National Police Chiefs’ Council and the Association of Police and Crime Commissioners, to stress that much tougher action is needed.

Ms Simpson says: “We are not 100% sure if magistrates have been correctly informed to the changes in sentencing guidelines for this offence.

“We want to raise awareness of this with magistrates that they have increased powers when handing out prosecutions for fly-tipping offences.”

Andrew Gillett, legal adviser at the Country Land and Business Association (CLA), believes a couple of articles in the press about judges handing out punitive fines would make fly-tippers think twice.

“The balance is the wrong way around – and that’s why fly-tipping is increasing,” he explains.

“If people feel that there is a low level of enforcement and they will save significant sums, then they will [fly-tip].

“We need to see the police, Environment Agency, local authorities working together and taking stronger action.

“The law courts have decent powers to give these criminals hefty fines and long prison sentences. The deterrent is huge, but the law is not being applied.”

The CLA would also like to see more on-the-spot fixed penalties handed out for offenders and vehicles used to commit offences confiscated and crushed.

The organisation also believes there is widespread under-reporting of fly-tipping incidents on farms and, it has urged farmers and landowners to report all incidents to help police and the authorities build a true picture of the scale of the problem.