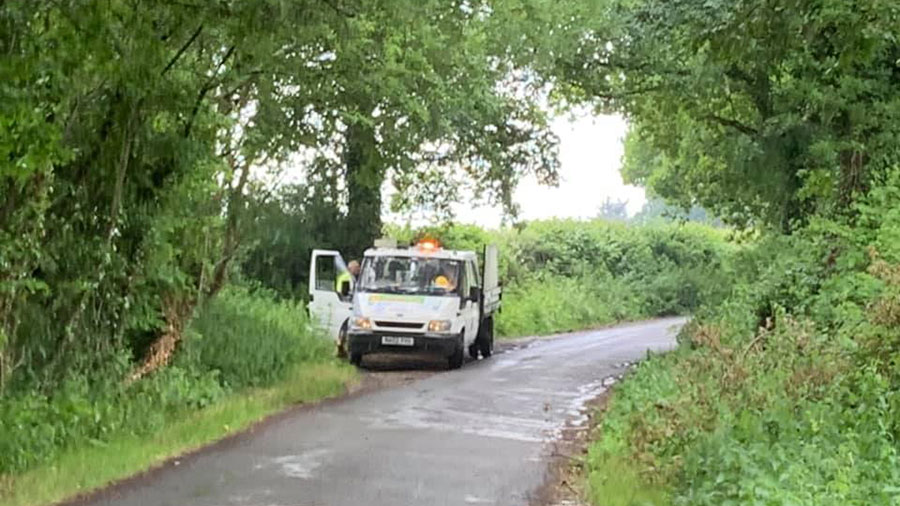 Suspected fly-tippers got more than they bargained for when they bumped into a brave smallholder.

Andrea Good was sat having a coffee when she spotted two tradesmen pull up in a white van and dump a load of rubbish on the grass verge and in her field.

But the brave mother-of-three decided to confront the workmen and filmed the whole incident on her mobile phone.

The 10-minute video, recorded near the village of Netley Marsh, in New Forest, Hampshire, has gone viral, notching more than 500,000 views and attracting 3,000 comments. It has also been shared more than 20,000 times.

The video starts with Ms Good approaching the pair – who were driving a white Transit van with “Checkatrade.com, where reputation matters” emblazoned across its side – and she asks the men what they are up to.

One workman, with short grey hair and wearing a high-visibility jacket, tells her they are “sorting the rubbish out”.

The second worker, a younger man with brown dreadlocks, gets agitated when she starts filming the front of the van and capturing the registration plate on film. “Why are you taking photos of the van?” he asks.

Ms Good tells him: “I ain’t being funny mate. But you have just pulled up here. I saw you pull up. This has all been hurled out.

“You give me a cock and bull story about a car going past. I will tell you now, CCTV will tell you that it hasn’t. So, I’m going to wait here for you to clean it up.”

One workman tells her: “Of course we are. I’m not gonna drive off. That’s why I’ve got my lights on.”

Ms Good continues filming as the men tidy up the mess, which includes rubble, plastic, metal, an old toilet and a bucket.

One workman tells her that one piece of rubble “just flew over” into her field while they were sorting it out.

Ms Good quips: “The problem is, you get so many people fly-tipping these days, don’t you?” 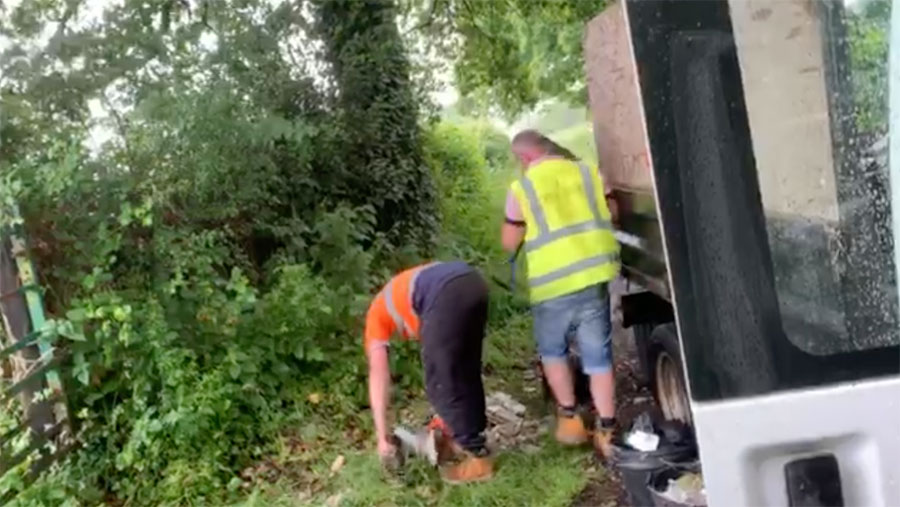 One workman replies: “We’re registered, my love. I wouldn’t do that at all.”

Ms Good asks: “Couldn’t you have taken this to your own yard to sort out, rather than do it in a gateway?

“The problem is you are going to leave quite a lot of rubbish that my animals [will walk over].”

One workman tells her: “We work from home… they don’t let us sort it out in the tippers yard.”

Ms Good replies: “But to be fair, trying to sort it out in someone else’s gateway isn’t really on, is it?”

The grey-haired workman tells her he thought it was a lay-by. “We’re not fly-tippers, love,” he says.

He adds: “I’ll be honest with you, we have just come from the Southampton tip and we did have a tarpaulin but it ripped, and we were so stressed because a lot of Southampton is closed off.”

The workmen’s company released a statement on Facebook, saying they had been “in contact with the police” and would help the local council in any investigation.

Louie Lewis, managing director of LJ Waste and Maintenance, said: “I am disappointed to see what is happening to our family-operated company on Facebook.

A spokesperson for Checkatrade said: “We were made aware that a trade member has been fly-tipping illegally. We immediately suspended the member from our listings while the matter is investigated further.”

Posted by LJ Waste and Maintenance Ltd on Saturday, June 13, 2020