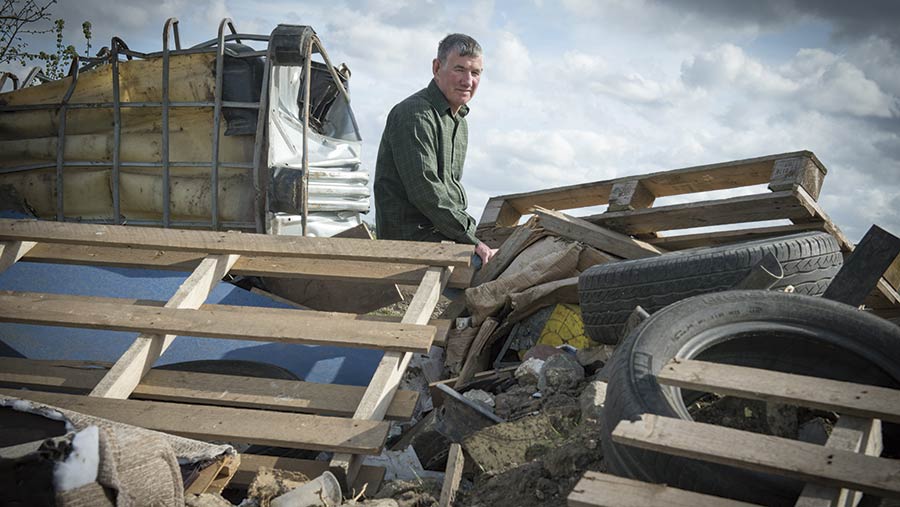 Essex grower Harry Fisher says criminal gangs dumping waste on an industrial scale have turned his farm into a “warzone”.

Mr Fisher, who farms 240ha growing potatoes and cereals in Rainham, says gangs are regularly smashing farm gates and dumping lorry-loads of rubbish and recycled waste on his farm.

His warning comes as Farmers Weekly launches its “Stop the Blot” campaign to highlight the problems caused by fly-tippers illegally dumping vast quantities of waste in the countryside.

In one incident, brazen fly-tippers rammed a farm gate and drove on to one of Mr Fisher’s fields – churning up a wheat crop, before dumping a tank full of plastic waste.

“It’s a real pain because we need to use a telehandler to move them out the way to enter a field,” said Mr Fisher. “Sadly, there’s no other way.”

Mr Fisher has had to give up the tenancy on one 38ha farm because it was being repeatedly targeted by fly-tippers.

“We told the landlord we couldn’t farm it anymore. We spent more time cleaning up the field than farming it,” he said.

Mr Fisher estimates there are more than 100 lorry-loads of rubbish to clear, costing about £80,000.