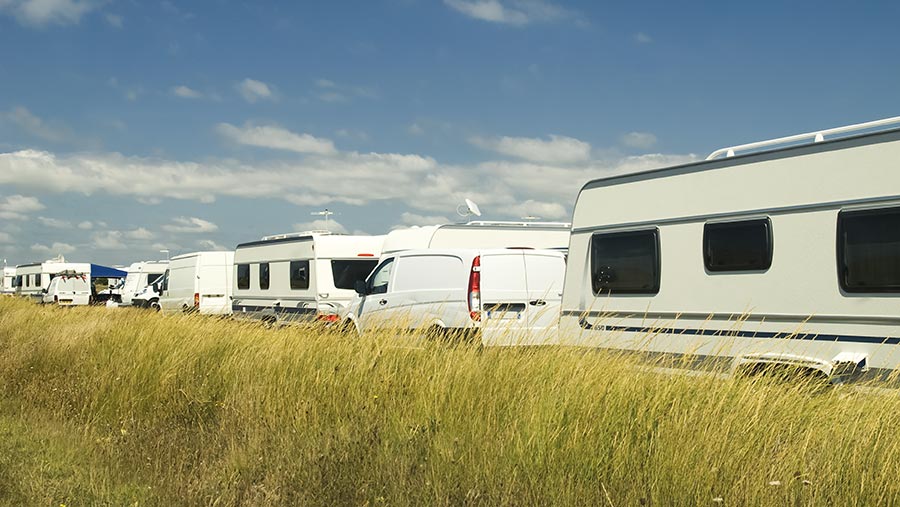 Farmers have challenged the UK government to act on its pledges to create a new criminal offence to tackle illegal encampments on private land.

Home secretary Priti Patel has laid out plans to crack down on unauthorised encampments that will specifically target trespassers using vehicles to reside on land who are causing disruption to local communities.

Under current laws, landowners must go through the civil courts to remove people trespassing on their land. The cost of securing an eviction can be expensive and claims for nuisance and fly-tipping can run into thousands of pounds.

See also: What to do if you’re a victim of… trespassing travellers

As part of the Police, Crime, Sentencing and Courts Bill 2021 for England and Wales, the Home Office is proposing to give police powers to remove people trespassing on private land.

Those who breach the new rules could face a three-month prison sentence and a fine of up to £2,500.

Police will be given powers to seize property, including vehicles, where individuals reside or intend to reside on land with a vehicle.

If a person re-enters the land without consent within the next 12 months, they could be subject to further penalties.

In Ireland and Scotland, unauthorised encampments have been treated as criminal offences for some time.

In 2018, his landlord was left with a £10,000 clean-up bill after travellers set up a camp in a field in neighbouring Surrey.

Mr Rayner said he has lost faith in policing and had employed a private security team to look after his land.

“I would like the Conservatives to tell us when they have got these [trespassing] laws in place. Otherwise, it’s like promising your wife you’re going to take her on a luxury cruise next year,” he said.

“It is time for Priti Patel to deliver. Tell me one thing she has done which has made a difference?

“You are more likely to be arrested for blocking a footpath than a criminal is for trespassing on a farm.”

The Country Land and Business Association (CLA) said it was vitally important that police used the new powers to tackle incidents head-on.

CLA president Mark Bridgeman said farmers and landowners had been severely affected by the damage caused by unauthorised encampments.

“From their businesses being disrupted and their families being threatened, getting the situation resolved is a stressful and time-consuming process and costs thousands of pounds in legal fees and clear-up costs,” he said.

But the proposals have faced strong criticism from the traveller community.

The Friends, Family and Travellers charity said only 18 of the 251 registered traveller sites in the UK had spaces available. “Everybody needs a place to live. It should not be a crime to have nowhere to go,” it said.