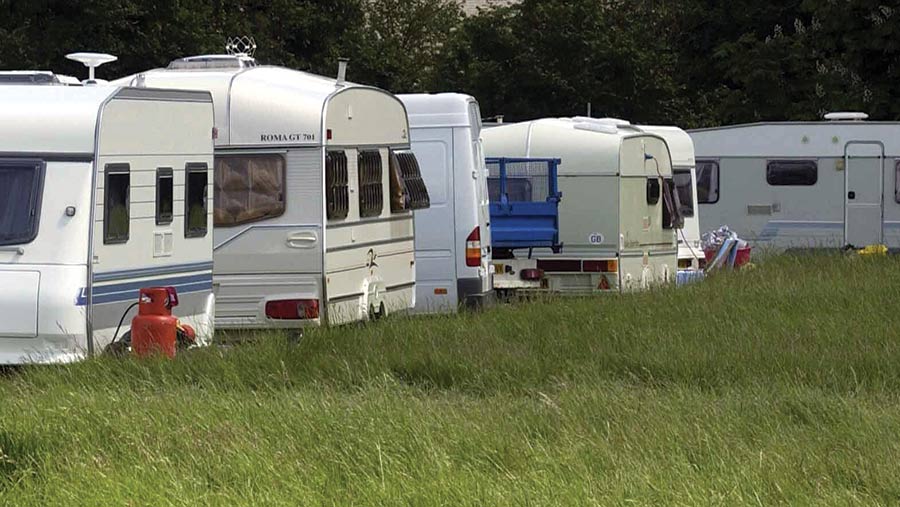 A government consultation on new powers proposed for the police could make it easier to deal with travellers who set up unauthorised encampments on farmland.

Hundreds of vehicles are parked up on unauthorised sites across England.

According to the latest figures, this included 789 caravans parked without permission on land not owned by travellers at the start of this year. And getting them moved on is often difficult and costly.

Currently, setting up an unauthorised encampment on private land is classed as trespass – which is defined in law as a civil matter.

This means the police can be reluctant to get involved – unless they suspect a more serious offence is taking place.

But the Home Office consultation, which started this month, could lead to unauthorised encampments becoming a criminal offence.

Under the proposals, police would be given powers to arrest and seize the property and vehicles of trespassers who set them up.

The government says the move follows a Home Office review into how trespassing while setting up an unauthorised encampment could be made a criminal offence in England and Wales – learning lessons from the Republic of Ireland.

It wants to broaden the categories of criminal trespass to cover anyone who enters any land without the permission of the occupier with the intention to reside.

Further proposed amendments include reducing from six to two the number of vehicles needed to be involved in an unauthorised camp before police can act.

Police would also be able to direct offenders out of the local authority area, rather than simply moving them on.

In addition, police would be allowed to remove trespassers from camping on or beside a road.

And the time after which offenders can return to a site from which they have been removed would be increased from three months to one year.

The Country Land and Business Association (CLA) has long called for the law to be amended.

As it stands at the moment, the law merely prescribes a power for the police to remove trespassers on land in specific circumstances, says CLA chief legal adviser Andrew Gillett.

“We believe the police would be encouraged to act in such matters if there was a specific offence related to the entering and occupying of land without consent,” he explains.

The CLA believes the offence could reduce the prevalence of such incidents by deterring travellers from occupying land without consent.

It says there would be greater certainty for the police, who may be encouraged to act if they understood an offence had been committed.

But the CLA also says any amendment should be considered alongside the need for local authorities to provide enough authorised caravan sites for travellers through their local plans.

Although planning authorities are already obliged to do this, it says delivering these sites on the ground is “very slow indeed”.

CLA head of planning Fenella Collins says: “Removing illegal encampments would be easier because the travellers could be directed to an appropriate site. At the moment, there are few sites to direct them to, so they simply move from one illegal encampment to another.”

The Friends, Families and Travellers organisation, which campaigns on behalf of travellers, says the proposals would have a devastating effect on the communities it represents.

The proposals focus on the behaviour of a minority – but tar all travellers with the same brush, it says.

“If there was a real appetite to address the issue of unauthorised encampments, the government would have invested in site provision.

Yet, for more than a decade we have seen little to no progress in this area. Criminalising families who have no place to go is inhumane and wrong.”

What the government says

The government says it is clear unauthorised encampments cause problems for communities and businesses.

And it says it has reminded councils of their obligation to provide enough sites for travellers – and prevent problems from being shifted to neighbouring areas.

Home secretary Priti Patel says: “Unauthorised encampments can cause misery to those who live nearby, with reports of damage to property, noise, abuse and littering. The public want their communities protected and for the police to crack down on trespassers.”

Farmers who need to get travellers off their land have a number of options – but should first of all simply ask them to leave, says Julie Robinson, partner at Roythornes Solicitors.

If they refuse to go, there are three main legal routes to removing travellers: applying for a possession order; using common law rights to recover the land; and relying on the police to take action.

Possession orders
Farmers can apply to county court for a possession order. They will need put up copies of their claim form on the land. “It is quick but will still take a few days.”

Farmers will need to show that they have a right to bring the claim. Having to hand an accurate, up to date plan of the land they occupy will help to keep legal costs down.

Encampments will usually move on once a possession order is made – although travellers may only move to another part of the farm or next door. Farmers will also have to bear the cost of making good any damage or clearing up any waste left behind.

Common law rights
Landowners have a common law right to use reasonable force to remove trespassers. Whilst this could be quicker than the county court route it could get messy and farmers are advised to engage a bailiff to assist.

No more force than is necessary must be used. Police should be notified beforehand and called in to stand by to prevent a breach of the peace. If police advise that it is inappropriate to carry out an eviction, it should be delayed.

Police Powers
The police do have powers to direct trespassers to leave and to remove their vehicles if they do not comply. Trespassers must be on the land intending to reside there and there must have been damage to property, threatening behaviour or six or more vehicles involved. But pressures on police resources may mean they are reluctant to get involved.

“You will need to show that you have taken reasonable steps to ask trespassers to leave. You are then dependent on the police taking action, which means it is in somebody else’s hands. If you just want to get people off your land, it may not be the most effective option unless there is an altercation.”

A Surrey landowner was left with a £10,000 clear-up bill after a group of travellers set up an unauthorised encampment on land rented to a farmer.

Seven caravans arrived at the site of the former Wisley Airfield earlier this year.

Locks on the gate had been cut off with portable angle grinders, says farmer Colin Rayner, who discovered the encampment at 9am on a Monday morning.

The landowner – Wisley Property Investments – employed a bailiff to serve notice for the travellers to leave by 8pm the same evening.

The caravans eventually moved on the following day – leaving behind a mountain of fly-tipped waste. 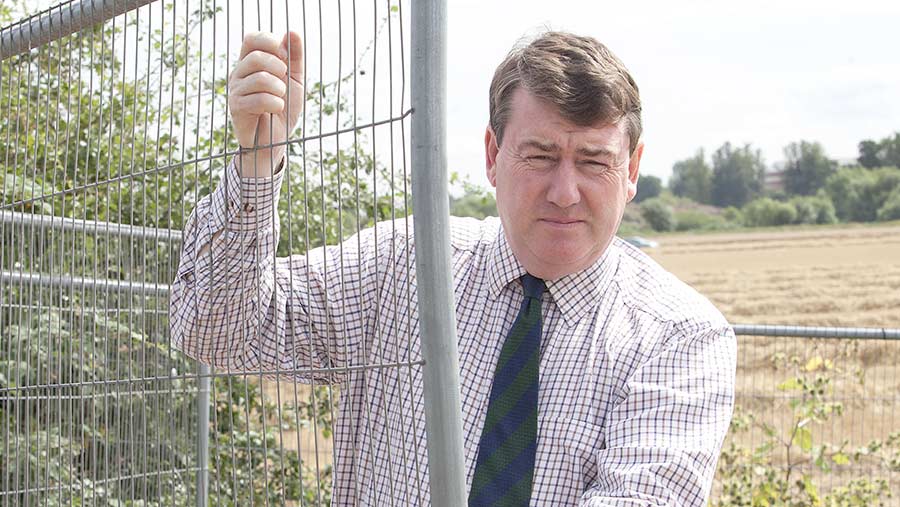 “This is how travellers make their money – they go around housing estates, take a load of muck and then dump it on my land for nothing,” says Mr Rayner.

It cost an estimated £10,000 to dispose of the waste, repair the gate, pay for extra security and the bailiffs.