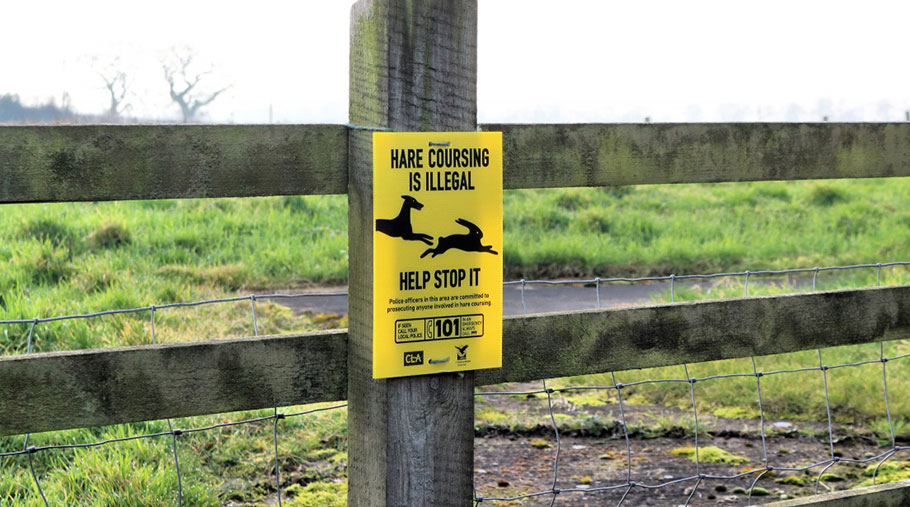 Police have issued a plea to farmers to stay vigilant and look out for hare coursers after harvest.

Incidents of illegal hare coursing, which involves dogs competing against each other in pursuit of lives hares, tend to increase directly after harvest, or in early September, as arable fields become bare.

Already, a number of police forces across the UK have reported a spike in reported incidents in the past fortnight.

See also: Hare coursing – What you need to know if your farm is targeted

In Cambridgeshire, suspected hare coursers torched a car and set alight a recently harvested field near Comberton on 6 August.

Five dogs were seized and taken into care of the local authority and four men were handed a section 35 dispersal order to leave the county.

Police Scotland has reported a number of recent hare-coursing incidents.

On 5 August a farmer spotted two men in a silver Toyota Rav 4 vehicle with a 52 plate and a third man chasing two lurcher-type dogs across a field near Freuchie, in Fife.

The driver of the vehicle stated that they were exercising the dogs prior to going to Kirkcaldy and left the area.

The same vehicle was seen at 9pm on 8 August driving across a field between Dairsie and Balmullo with two occupants and two dogs.

August is high-risk time for hare coursing; with the harvest taking place=more exposed fields for coursers to exploit. Coursers travel far to bet large sums of £££. They trespass, cause damage and thefts and intimidate & animal suffering. See it taking place? Ring999 #OpGalileo pic.twitter.com/sRkA3ImQSj

Thames Valley Police in Aylesbury Vale, Buckinghamshire posted on Facebook on Monday (19 August) that officers have “started to see a slight increase in reports of hare coursing now the fields are starting to be harvested”.

Thanks to a call to the RTF the Toyota Rav4 involved in hare coursing last night was found and seized in #Faversham #opgalileo #1lesstoworryabout MP pic.twitter.com/JK0UVCl6Ha

The CLA has called for tougher penalties for hare coursers.

CLA North Adviser Libby Bateman said: “Fines imposed under the Hunting Act are unlimited, yet too often they amount to just a few hundred pounds.

“This is not an effective deterrent for a lucrative crime perpetrated by criminal gangs. The police are able to seize vehicles and dogs – both of which would have a direct impact on hare coursers.”

Hare coursing is illegal under the Hunting Act 2004. It is the pursuit of hares with dogs, often for the purposes of betting on open, flat land.

Apart from the Hunting Act offences, it also has many criminal impacts – criminal damage to boundaries, fencing, gates and fields.

Farmers are also often faced with threatening behaviour and intimidation. There are also money-laundering offences from the proceeds of crime.