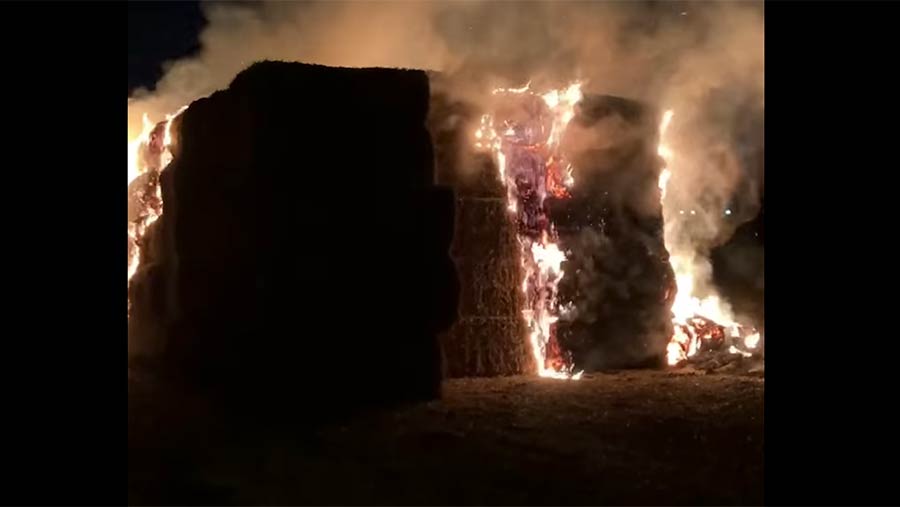 A screenshot from the video posted on Facebook © Pink Pig Farm

Firefighters tackled a huge bale fire started deliberately on a farm in Lincolnshire, stopping the blaze from spreading to a barn housing pigs and piglets.

The stack of bales was torched in the early evening on Friday (26 February), sending billows of smoke and embers towards the livestock housed in a nearby barn.

It is the second time during the coronavirus lockdown that the Pink Pig Farm in Scunthorpe has been targeted by arsonists.

In a Facebook post the farm said the fire was “devastating” and it had lost 140 straw bales worth about £10,000.

A group of young people were pictured standing on the bales before the fire started.

Humberside Police is investigating and has asked anyone with information to ring 101, quoting log 542 of 26 February.

A police spokesman said: “We are investigating a reported arson on Holme Lane, Scunthorpe, following hay bales being set alight at approximately 7pm.

“Officers attended the scene and have been following up a number of lines of enquiry to determine those responsible.

“Thankfully, no one was injured and the fire was quickly put out by our colleagues in the fire service.”

In a further update, the farm thanked people for their support and the GoFundMe page that was setup to raise cash to help cover the losses from the fire.