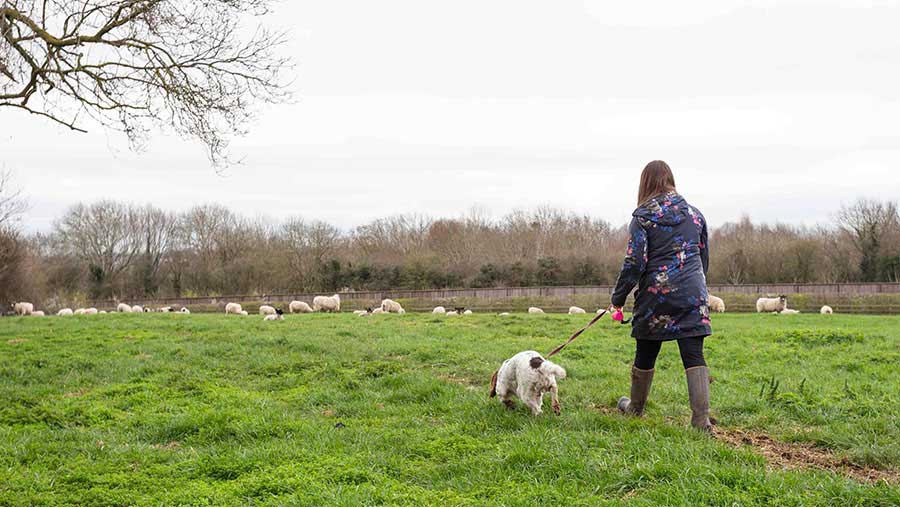 The NFU has joined with partners to encourage dog walkers to put pets on a lead when walking near farm animals and follow the countryside code.

Latest figures from insurer NFU Mutual show the cost of claims for dog attacks on livestock rose by 50% during the first quarter of 2021 compared with 2020.

The rural insurer has attributed the increase in attacks to more people buying dogs during the lockdown – but then failing to train them properly and keep them on a lead near livestock.

To raise awareness of the worsening problem, an event in Surrey will see NFU representatives joined by partners including the National Trust, Surrey Police, police and crime commissioner Lisa Townsend, and Mole Valley MP Sir Paul Beresford in talking to  dog walkers.

The event will take place at 10.30am on Tuesday 10 August at the National Trust’s Polesden Lacey, near Dorking (car park RH5 6BD).

“As we’re seeing an above-average number of people and pets in the countryside as the pandemic continues, we’re taking this opportunity to educate dog walkers,” she explained.

“We hope to explain how farmers play a vital role in the management of the Surrey Hills, producing our food and caring for this wonderful landscape.

“We encourage people to show appreciation by keeping dogs on leads around livestock and picking up their poo, which can be harmful to animals, especially cattle. Always bag and bin your dog’s poo – any bin will do.”

The NFU is campaigning for leads to become law when dogs are walked near farm animals.

The National Sheep Association (NSA) said sheep farmers had suffered both financially and emotionally from a rise in sheep worrying offences over the past 18 months.

Countless popular rural tourist spots are on working farmland, with many farmers working hard to maintain footpaths and public rights of way so that visitors can enjoy the countryside.

NSA chief executive Phil Stocker said he feared attacks on flocks would rise once again during the “staycation” summer, with many families taking their pets with them to the countryside.

He added: “It is crucially important that dog owners must be aware of the serious issue of sheep worrying by dogs and take action to be a responsible dog owner.”