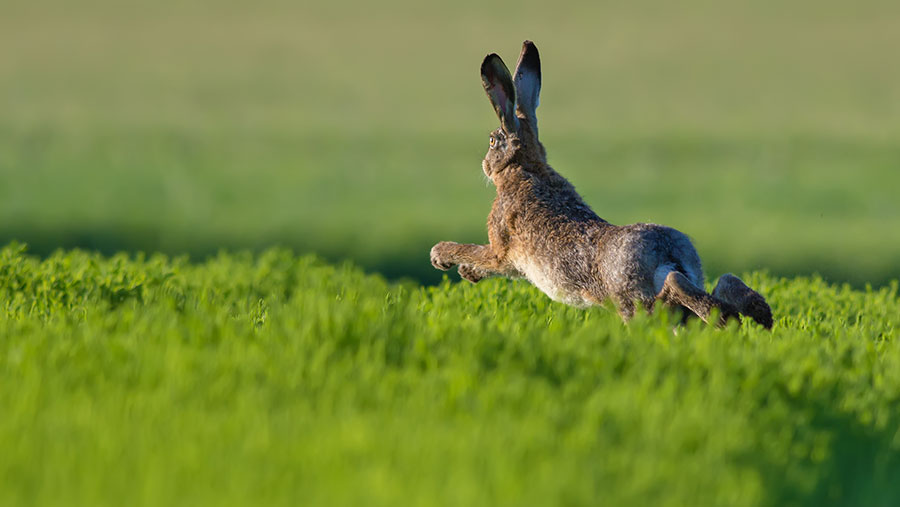 Police are appealing for footage after hare-coursing events took place on farmland in Bedfordshire.

The events were held across the county following the funeral of a member of the travelling community who is said to have been a prolific hare courser.

Dozens of people travelled to Bedfordshire to take part in the illegal events on Wednesday 10 November.

Disturbing footage has been posted to social media websites showing one event taking place at a farm.

It shows several 4×4 off-road cars parked up on the road alongside a field, and about 100 men are filmed cheering as lurcher-type dog catches a hare. Some men are seen drinking and trampling over an emerging cereal crop.

One farmer, who asked not be named, said: “It’s disgusting. If it had been a fox, the animal rights campaigners would have been up in arms.”

Some shocking footage has emerged of illegal hare-coursing in Bedfordshire this week pic.twitter.com/MCFkQPMdAw

A second video has also emerged of the coursers tearing across farmland in off-road vehicles while dogs chase hares around the field.

A third video posted on social media shows Transit vans, 4x4s and other cars being driven through Bedford town centre and the occupants sitting on the roofs and hanging out of the windows brandishing dead hares.

Two of the 4x4s are then filmed ramming into each other, beeping their horns and being driven at speed through Bedford.

The NFU said police officers were “powerless” to intervene because of the sheer number of attendees.

“A mass hare-coursing event has taken place following the funeral of a member of the travelling community who was a prolific hare courser,” said an NFU spokesman.

“Police were out using body cameras to record incidents, but with that number of people it’s difficult to know where to start. It’s very brazen.

“Hare coursing has a serious financial and emotional cost for farmers, who are intimidated and threatened by these people – who are often involved in other organised crime.”

Bedfordshire Police said the incidents were “concerning” for members of the Bedford community, but it was investigating.

The force’s assistant chief constable, Sharn Basra, said: “We were made aware in advance of plans for a funeral that was due to take place in Bedford and worked with the local authority, the cemetery and the family to ensure that mourners could attend safely to pay their respects.

“The event was resourced by police based on the intelligence and information we had received, including the deployment of officers to key locations.

“While the service at the crematorium passed without issue, the events that proceeded it differed significantly to the information we had initially received, and clearly the behaviour during the cortege was completely unacceptable and we are taking this very seriously.”

Bedfordshire Police’s Rural Crime Team is working with dedicated investigators to build evidence in relation to several allegations of public nuisance, including traffic and hunting offences.

Appealing for people to come forward with footage of the events, chief cons Basra said: “We know people will have seen or recorded the incident and we are asking them to share their accounts and footage with us. We also want to hear from people who have been affected by the incident, as your accounts could be key to our investigation.

“Such behaviour will not be tolerated in our county, and we do not underestimate the effect it has had on our Bedford residents and businesses.”

Officers will be increasing patrols across Bedford town centre this weekend in case there are further incidents.

Anyone who has been affected by this event or has any relevant recorded footage is urged to call Bedfordshire Police on 101.