Police forces have been out in force to target gangs involved in illegal hare coursing and poaching on farms.

The hare coursing “season” starts in September after crops have been harvested from fields and usually continues until March.

Without crops to hide wildlife after harvest, the illegal activity is ramped up on arable land across the UK.

Hare coursing was banned in 2004 under the Hunting Act.

It involves huge sums of money being bet  on the outcome of dogs such as greyhounds and lurchers chasing hares.

The crime carries a maximum penalty of £5,000 and can have a severe impact on ecosystems.

Important- do not approach suspected Hare Coursers, get as much detail as possible from a safe distance then ring us on 101. Steve

Over the weekend of 24 and 25 September, Norfolk Constabulary’s rural crime team carried out an intelligence-led hare coursing operation on a large west Norfolk farming estate. 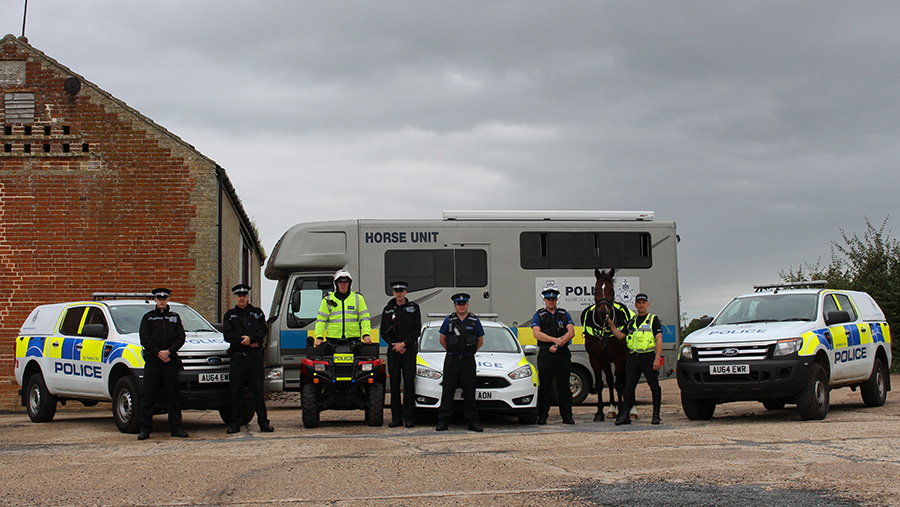 Officers used horses from a police horse unit and quad bikes to disrupt a number of hare coursers and they continue to work with the rural community to identify the offenders.

Sgt Mark Askham, of Norfolk Constabulary, said: “It is critical  we engage with our rural community and are able to facilitate bespoke methods to tackle concerns of rural crime.

“The foundations of our rural community are strong and the weekend’s activity is an example of how Norfolk Constabulary has responded effectively to a type of rural criminality, which will not be tolerated.”

Meanwhile, over the border in Suffolk, police are seeking help to identify the owners of a distinctive gold Honda CRV, which was used by a gang spotted hare coursing on farmland in Ixworth on Monday evening (26 September).

In Lincolnshire, police met with farmers at a meeting hosted by the NFU in Spalding on Friday (23 September).

Officers discussed Operation Galileo, which aims to reduce incidents of hare coursing across the county.

Suspected hare coursing can be reported to police on the non-emergency 101 number or in an emergency call 999.