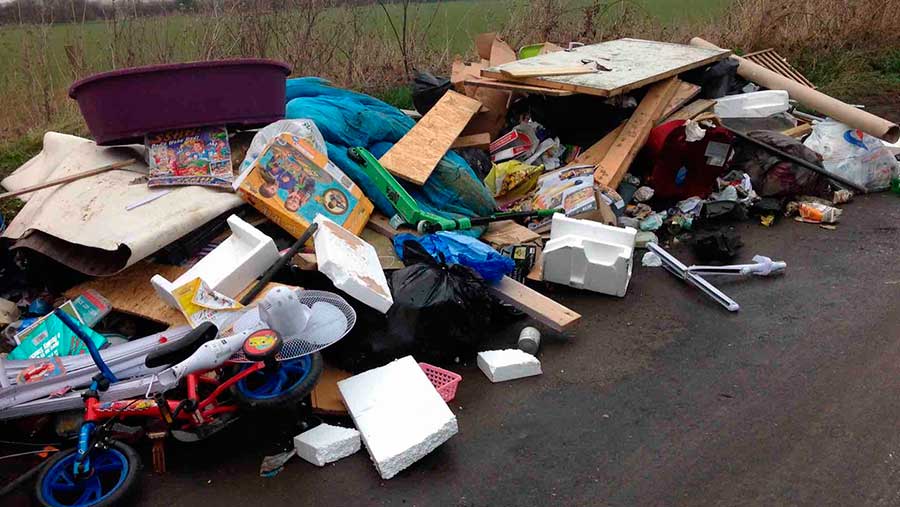 A teenage girl has been fined £1,000 for dumping rubbish next to a farmer’s field in Kent.

Documents left in the fly-tipped waste led police to the home of Vineta Donika, of Institute Road, Chatham.

Officers repeatedly tried to contact the 19-year-old without success, to question her about the fly-tipping incident in Common Lane, Cliffe, last November.

Eight bin bags of clothes, a dog basket, a child’s scooter, bedding and paperwork were found in the pile of mess.

The case was referred to Medway Magistrates Court and Ms Donika was summoned to appear before magistrates on 4 September.

Magistrates handed the same fines to two others – Jade Miskin and Levi Stone, both from Greenhill Road, Northfleet, after bank statements left in the rubbish linked them to the crime.

“From the level of the fines handed down, it’s clear just how serious the offences are, highlighting the importance of assisting officers in their investigations,” she added.

“Even if you don’t fly-tip waste yourself, if your details are found within the pile it’s imperative that you work with the council during the investigation.

“Fly-tipping is totally unacceptable and we will continue to rigorously investigate incidents of this nature and prosecute the perpetrators.”

Medway Council clears about 467t of fly-tipped waste and almost 1,620t of litter from the streets of Medway each year, costing taxpayers £4m to dispose of.

Farmers Weekly, in association with CLA Insurance, has launched Stop the Blot, a major campaign which aims to tackle the illegal dumping of rubbish on our farms.

Commenting on this case, CLA legal adviser Andrew Gillett said: “It is good to see the council has cracked down on fly-tipping and pushed this case for prosecution. It sends a clear message to those who are caught that they will face financial consequences.

“The more fly-tipping incidents are investigated and prosecutions are brought forward, the greater the deterrent effect. People would be more encouraged to do the right thing and dispose of their rubbish through proper legal channels if they see that fines are enforced.”