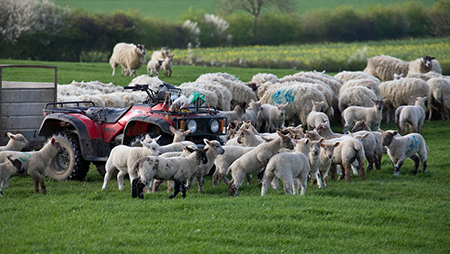 An increase in thieves targeting farms for quad bikes and all-terrain vehicles (ATVs) during the busy period of lambing has sparked concern across the UK.

Though criminals will steal farm vehicles throughout the year, they are seizing any opportunity to strike, and busy periods of activity, such as the lambing season, can be a peak time for attacks, according to NFU Mutual.

Overnight on Sunday (24 March), a Suzuki Eiger 400 ATV was stolen from a farm’s garage in Balne, near Selby.

North Yorkshire Police said the stolen vehicle is red and has been adapted for a left-handed driver, with the throttle on the left handlebar.

In South Yorkshire, a yellow Can Am Outlander 400 quad bike was stolen from a farm in Bradfield on Friday 22 March.

Police say a long wheelbase white van with red and yellow hatch markings on the rear doors is suspected to have been involved and ask anyone with information to get in touch.

Keep a look out for this CAN AM OUTLANDER 400 QUAD BIKE. Stolen from a farm in Bradfield during a burglary 22nd March. It is suspected a long wheelbase white van with red and yellow hatch markings on the rear doors may have been involved. Any information please get in touch. pic.twitter.com/mOtuyC8dd8

Elsewhere, a red quad bike with a distinctive rack on the front was taken from a farm near Haltwhistle, Northumberland, between 3pm and 4pm on Tuesday (26 March).

It was put into a blue Ford Transit with white stripes and red lights above the rear doors and was last seen in Hamsterley, near Bishop Auckland, in County Durham.

Between 3pm & 4pm today this quadbike was stolen from a farm near #Haltwhistle. It was put into a blue Ford Transit with white stripes & red lights above the rear doors. Last seen in #Hamsterley nr #BishopAuckland in the @DurhamPolice area. Quad has distinctive rack on the front pic.twitter.com/589UcdYVOL

Anyone missing a green quad bike should contact police on 101, quoting 407.

On Wednesday 20 March, Avon and Somerset Police worked with officers from Wiltshire Police to recover a stolen quad bike.

As it had a tracker installed, the officers were able to locate and secure it within 90mins of it being reported.

Quads and ATVs are the top target for thieves in the UK, says NFU Mutual, as they are easier to steal and sell on than larger farm vehicles.

Criminals spend time staking out farms for vulnerabilities and are more likely to avoid those where there are obvious signs that good security is in place.

CESAR marking and tracking devices are the most effective security measures, once basic measures of keeping vehicles out of sight in a building with the machine secured have been addressed.

The cost of quad and ATV theft claims to NFU Mutual rose 27% from 2015 to 2017 and early indications suggest another significant rise over the past year.

Rebecca Davidson, rural insurance specialist for NFU Mutual, said: “Rising levels of crimes are being seen in urban areas as well as the countryside.

“We are convinced that without rural policing initiatives and organisations such as NAVCIS – which co-ordinates reports of stolen agricultural vehicles across all police forces and Border Control – we would be seeing an even bigger increase in rural crime.

“We are therefore supporting these initiatives and working with police forces, the NFU, and security firms to find ways to tackle the current rural crime wave and prevent it from becoming an epidemic.”

Advice for all vehicles

Advice for quad bikes and ATVs