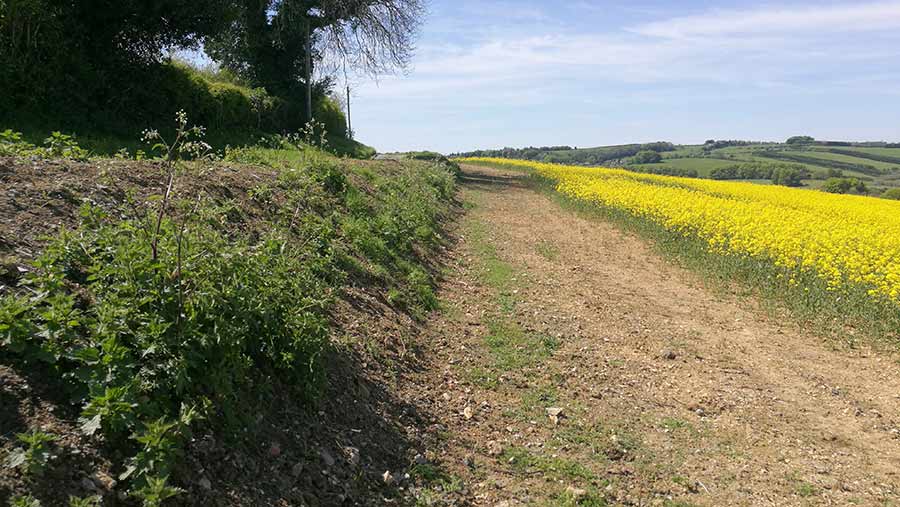 For centuries, earth bunds were used to protect areas and keep unwanted visitors off land near forts, castles and human settlements.

Now, in a modern twist, bunds and embankments are helping to deter poachers, hare coursers and joyriders from entering farmland in Gloucestershire.

The Cotswolds is now predominantly an arable area, but many of the walls and fences surrounding farmland have not been maintained over the years because of the costs.

Earth bunds offer a cheaper way of building a barrier between roads or lanes and fields to prevent rural criminals from entering with 4×4 vehicles and damaging crops or killing livestock and wildlife.

The initiative is part of Operation Firefly, Gloucestershire Constabulary’s operational response to rural and wildlife crime within the county, which forms part of the force’s neighbourhood policing operation.

The partnership – between police, plant hire company Smiths of Gloucester, farmers and landowners – started two and a half years ago.

Since then, four landowners have signed up and up to 10km of farmland boundaries have been protected – with many more kilometres planned.

Dave Peters, tips and bund manager at Smiths of Gloucester, says police contacted the company last summer to enquire about the possibility of creating bunds to secure vulnerable farmland.

Before Smiths’ involvement, ditches and trenches were being dug around fields by another plant hire company to keep out criminals.

But officers realised these could be hazardous to wildlife and the public, and landowners could also find themselves in breach of Defra stewardship and basic payment rules.

“I explained that we could create a solid earth bund, so we started doing it that way instead,” Mr Peters says.

Earth to build the bunds comes from new housing development sites around the county, where Smiths removes top- and subsoil to leave a clean, flat bed for houses to be built.

The soil is sourced as near to the farm as possible, to limit transport costs and any damage to the environment.

Before use all soils are screened for contaminants and certified safe by an independent soils analyst.

A U1 exemption (use of waste in construction) must be obtained from the government to allow up to 1,000t of topsoil to be spread on farms without full planning consent being needed.

Before work begins, the team liaises with the Environment Agency and utility companies to make sure none of the work will disturb any underground infrastructure.

The team must also check with relevant authorities that the work will not disturb any Sites of Special Scientific Interest (SSSI), healthy habitats in general or historically important sites.

No cost to farmers

Smiths does not charge either the police, the taxpayer or the landowner for any construction of the bunds, and the company does not receive payments for the materials supplied.

By creating the bunds, it stops suitable, uncontaminated materials being dumped at landfill sites.

“We incur all the machinery, labour and diesel costs. To cause minimum disruption we try and do the work after harvest when there is stubble or when the land is set aside,” Mr Peters says.

““If the soil is ‘clean’, there is no reason why that would need to go to landfill,” Mr Peters says.

“Therefore, we are utilising the materials to good effect, saving them from going in a hole in the ground. It’s more sustainable and environmentally friendly.”

Typically, a couple of metres of headland is needed to build the bunds, on land which is least productive.

The soils can be tipped and pulled in from the road – as long as space allows – and then a digger bucket is used to shape the bund and make it solid and evenly balanced.

A couple of days later, a construction worker from Smiths returns to the farm to check the bund, “trim down” any loose areas and “cap” it with topsoil, while ensuring that the insides of the embankment are angled correctly.

Some farmers have planted hedgerows around their bunds to add natural shelter, habitat and a source of food for wildlife.

Police and landowners are also working with the Cotswolds’ Area of Outstanding Natural Beauty (AONB) grassland project team to sow grass or wildflowers on the bunds from this summer to encourage wildlife and make them look more aesthetically pleasing.

Hare coursers, joyriders and deer poachers have caused difficulties for years at farms in the Cirencester area, according to farm manager Roger Preece.

But the situation has improved markedly since bunds were created around problem fields.

“We are still getting some unwanted visitors in our fields, but nowhere near as many as before because we have strengthened the boundaries and blocked off the main entrances,” he says.

“It used to be very upsetting to spend time cultivating the land, trying to grow your crops to then have someone come and drive all over and destroy it.”

Mr Preece says building the bunds has been one of the best rural crime prevention measures taken at his 405ha arable farm.

“The beauty is, it hasn’t cost us a penny. I’d encourage any farmer to talk to their rural crime officer about any rural crime issues they have, to see if their boundaries are suitable for bunds.”

“Previously, multiple times a week the joyriders were driving into fields, doing donuts, damaging the crops, running down deer or using that farmland to access other bits of farmland where they knew there was machinery,” says PC Weller.

“Every farmer who has had this [bunds] done has had 100% success – not a single infiltration so far. I’m very confident that that success will carry on.

“With the bunds, there is no way for the joyriders to get off the land [to escape] any more – and they know that.”

PC Weller says some farmers who have had bunds built no longer use logs or other barriers to prevent access by unwanted visitors.

“They haven’t even fitted gates to the opening points of these fields where the bunds are,” he explains.

“The poachers are too scared to enter as they know they can get blocked in. It’s that fear of one way in, one way out. They look at it and realise: ‘This is a trap.’”

Last year, Operation Firefly helped to reduce the number of hare coursing incidents in Gloucestershire by 30%.

PC Weller says there is no doubt that the bunds around fields are a major deterrent for coursers, poachers and joyriders. 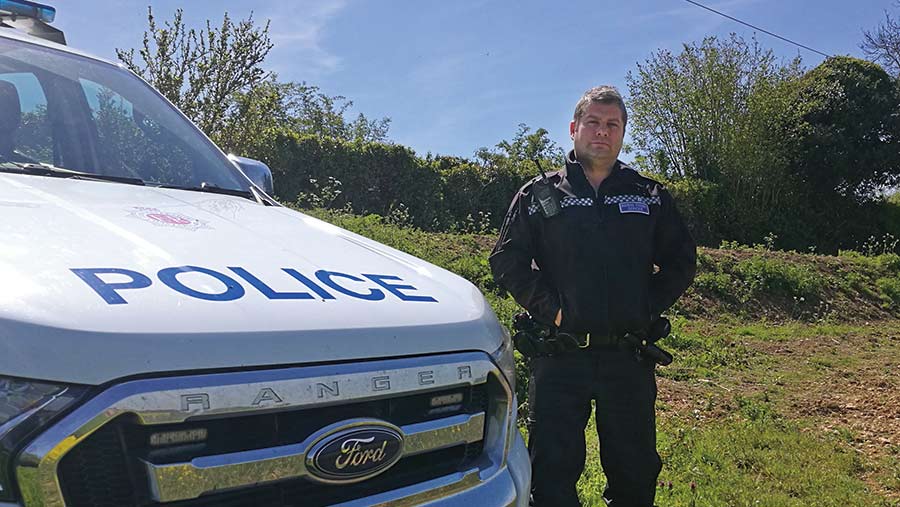 “We take a zero-tolerance approach now to hare coursing. The days have gone where they can spin us a lie and tell us they’ve driven 90 miles to walk their dogs in this field at 3am.

“Previously, we would have to rely on having hard evidence before we started seizing vehicles.

“Now, if we have suspicions, we will seize vehicles, mobile phones and their dogs.”

PC Weller describes the partnership as a “win-win” for police, the farmers, Smiths and the countryside.

“We win, because it reduces crime in our local areas. Smiths avoid landfill costs, which is bad for the environment, and the landowner wins because crops are not being damaged or livestock being killed.

“Nature is not getting terrorised and targeted the way it was. The only losers are the criminals.”

Farmers are the “eyes and ears” of the countryside and their posts to a WhatsApp group are helping to catch rural criminals, police say.

Gloucestershire Police, farmers and landowners in the Cotswolds are all connected with a rural crime WhatsApp group, which started in early 2018.

Group members are urged to report any suspicious sightings or criminal activity to alert others.

“We have 290 members on the Cotswold group alone. It’s been so successful we have adopted it across the whole of the police force now,” says PC Weller.

Police have given farmer group members detailed maps of their area, based on military spot maps, with grid references to enable police to pinpoint locations during reports of criminal activity.

Gloucestershire Constabulary says it’s essential that all farmers continue to report all incidents of rural crime on 999 in an emergency; or 101 in a non-emergency.