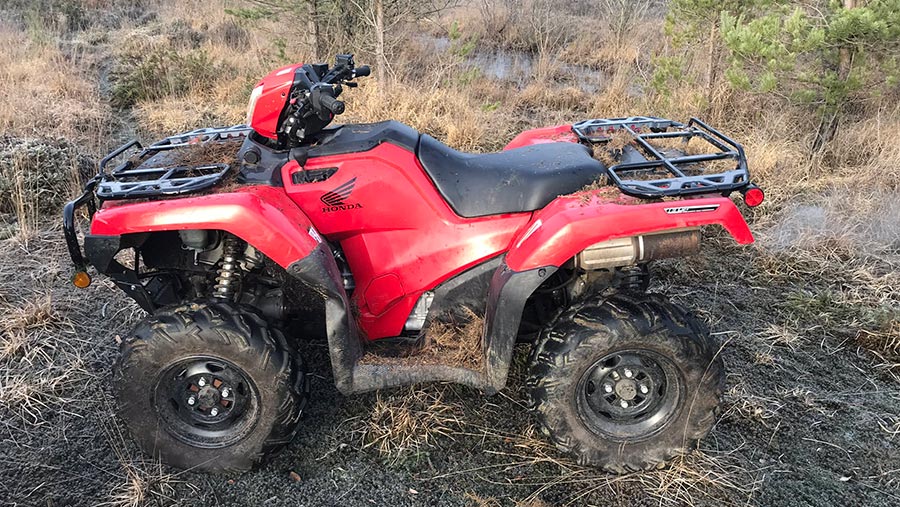 Farmers are being warned to remain vigilant with their security measures after several quad bike and farm vehicle thefts have been reported.

Over the course of two days, three quad bikes and one 4×4 were stolen from farms across Great Britain.

A green Honda all-terrain vehicle (ATV) was stolen overnight on 14-15 January from the Petworth area of West Sussex.

Meanwhile, a Big Red quad bike and a Green Nissan Pathfinder were taken from a farm in Gorebridge, Midlothian, during the same night. Anyone with information can call Penicuik Police on 101 and quote reference 0599 of 15 January.

Quads and ATVs are the top target for thieves in the UK, according to NFU Mutual, as they are easier to steal and sell on than larger farm vehicles.

Farm vehicles are stolen throughout the year, with thieves taking advantage of darker nights and fewer people being outside during winter months, and periods of intense farm activity, such as harvest in the summer.

Tim Price, rural affairs specialist at NFU Mutual, said: “It’s important to be vigilant whatever the season. We have seen a worrying spike in thefts, with quads and ATVs disappearing from farms in large numbers.

“Many quads aren’t licensed for road use, which means it is more difficult to trace them if they are stolen.

“We also understand that quads and other agricultural vehicles are being used as a form of criminal currency by international gangs following tighter money laundering legislation.”

On the same day, the force returned a second quad bike to its owner after carrying out a warrant with local teams Hart Rural Police and Fleet Police.

Advice for all vehicles

Advice for quad bikes and ATVs