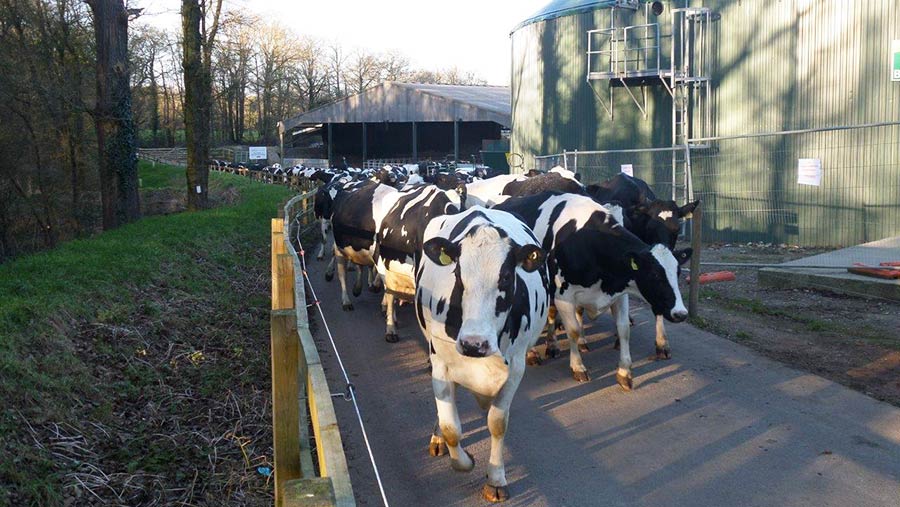 The dairy herd at Crouchland Farm

One of the UK’s largest anaerobic digester (AD) plants is facing a battle to continue operating at its current scale.

Crouchland Farm, in Plaistow, West Sussex, has had its retrospective planning application for expansion of its AD facility refused and it is now appealing that decision with a case due to be heard in September this year.

Crouchland began operating an on-farm AD unit to process its own waste from its dairy herd in 2009 to generate electricity to power the farm and export the surplus to National Grid, fully supported by the local community.

But since then, the company, Crouchland Biogas, has enlarged the site without required planning permission to an industrial-sized AD plant and has been exporting biomethane gas by tanker to enter the national gas grid, near Portsmouth.

Crouchland had its retrospective planning application to upgrade the farm’s AD plant refused in March 2015.

In addition, the company has received two council enforcement notices to remove the unauthorised, operational infrastructure and to stop the export of biomethane.

It is appealing the two enforcement notices, which will be heard after the appeal against the refusal for retrospective planning.

Crouchland has insisted the plans would provide renewable biogas to 3,850 West Sussex homes, secure 30 local jobs and the future of its dairy business. In addition, the farm sources feedstock from more than 20 local farms, which it says “rely on our biogas plant”.

Leon Mekitarian, Crouchland’s managing director, told Farmers Weekly the expansion of the AD facility was an essential component to ensure the survival of the business.

Mr Mekitarian said prices were “terrible” in dairying and he had sought to diversify to stay afloat.

He added: “Every farm in its own way is faced with these dilemmas. We just happen to be a large dairy farm in a corner of West Sussex and we are the last man standing.

“We make no apologies for that. We employ 30 people. We have 600 animals. That’s a large operation.

“You have got to make the best of what you have been given and the opportunities that are available to you locally.”

However, there were over 400 letters of objection from the local community and 1,100 people have signed a petition by local campaign group Protect Our Rural Environment (Pore), against the retrospective planning application.

Clarissa Bushell, a spokeswoman for Pore, said: “The community has campaigned against the industrial-sized AD plant due to its inappropriate location in a rural, tranquil area of West Sussex, which does not have the appropriate highway access and has caused safety issues on the rural lanes.

Local residents are also concerned about heavy vehicle movements from HGVs to and from the site and the effect on country lanes, associated noise and safety issues.

Meanwhile, the Environment Agency has launched legal proceedings against Crouchland Farm in relation to an alleged incident of pollution of the River Kird in December 2013.

The agency is also investigating separate liquid waste leaks, including one in June 2015 and another in March 2016.

One of the leaks, in June 2015, concerned a digestate spill on land belonging to sheep farmers Lynda and Richard Whittemore.

Sara Burrell, chair of Plaistow and Ifold Parish Council, said parishioners had no objection to on-farm AD plants, as such. But they objected to the “industrial scale” of the AD plant at Crouchland and the effect of heavy traffic on rural roads.