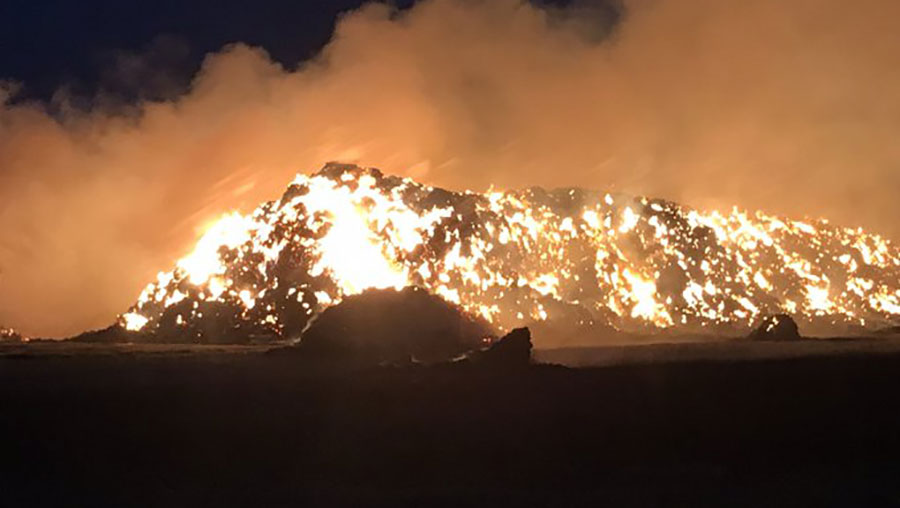 Fire crews remain at the scene of a huge fire on Friday 28 January which destroyed about 30,000 straw bales in Lincolnshire.

White, billowing clouds of smoke dominated blue winter skies after the fire broke out at an old RAF station in Hemswell Cliff, near Gainsborough, before 1pm on Thursday 27 January. 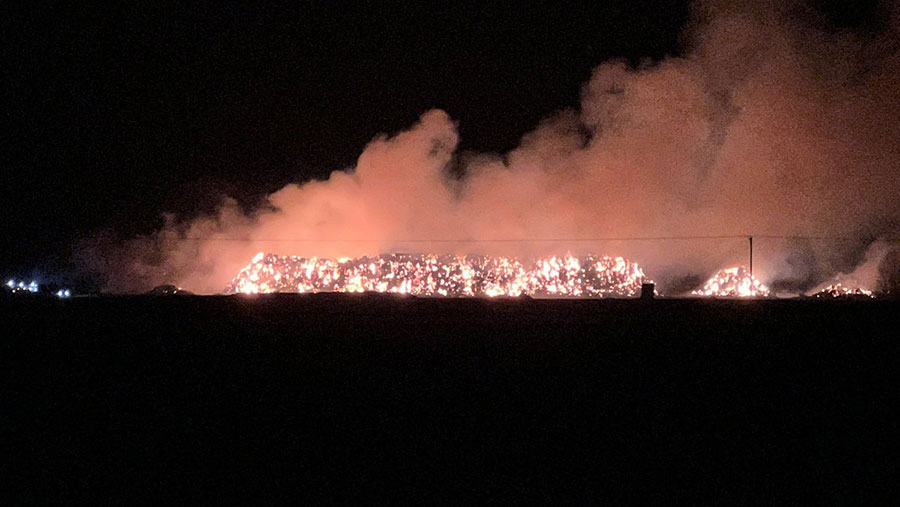 See also: How to protect your farm from fire risk and stay legal

Nearby residents were advised by the fire service to keep doors and windows closed as smoke drift was expected to “cause a nuisance” well into the night and into the following morning.

**Update Hemswell Cliff**
We still have 3 crews in attendance and our High Volume Pump continuing to dampen down and prevent fire spread. Residents are advised to close doors and windows due to smoke drift.

Local farmer Charles Anyan, who farms near Market Rasen, said the stash of bales was all destined for a power station rather than feed for livestock.

He told Farmers Weekly: “The flames were fairly massive. It was quite an impressive sight, but very sad at the same time.

“I drove past last night and it had been burning for a few hours. It was still smoking this morning and will be for a few days.

“There must be a million bales there; they stretch as far as the eye can see. It was fairly catastrophic, but it could have been a lot worse.”

Woldgrain Storage, a co-operatively owned grain storage facility, posted a video of the fire on Twitter. However, the fire was not connected to the company.

@CharlesAnyan it’s mainly the woodchip away at the far end, but Fire & Rescue now reporting 30,000 bales gone too 👎 pic.twitter.com/HSlNIhLt3U

The great fire of Hemswell rages on 🔥 pic.twitter.com/jqsRM4Jrqw

Arable farmer Malcolm Parr, who farms near Gainsborough, said he could see the flames six miles away. Others reported seeing the fire further field in Market Rasen and Wragby.

The fire at Hemswell is making the sky glow tonight, 6 miles away, 30000 straw bales which won’t make it to the power station 🙈 pic.twitter.com/Tw4wVKNZD7

An investigation into the cause of the fire is under way. It is believed that it was not arson, but may have been sparked by woodchip combustion.