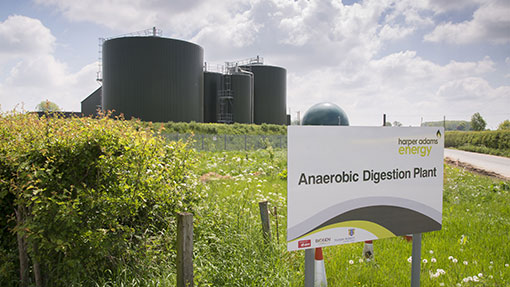 A clean-up operation is under way after slurry leaked from a £3m anaerobic digestion plant at Harper Adams University – for the second time in 18 months.

A processing tank at the AD plant is believed to have collapsed at Egremont, near Newport, Shropshire, in the early hours of Friday (30 May).

Emergency services were contacted and the fire brigade is on standby. An unknown amount of slurry has leaked from the collapsed tank.

Environment Agency officials said they were working with the university to contain pollution, assess whether there has been any impact on the environment.

Police have closed the B5062 west of the Harper Adams cross roads and Tibberton. Caynton Road and Flatt Road are both open.

In a statement, university vice-chancellor David Llewellyn said: “We were made aware of an incident within one of the processing tanks of the AD plant early this morning.

“The relevant authorities were then informed.

“After checking that no one had been hurt, our priority was to make the site safe for the workforce and begin the process of establishing what happened and what damage had occurred.”

Dr Llewellyn said all possible steps were being taken to minimise any impact on the surrounding environment.

“The incident has been contained on a small section of the Harper Adams estate – none of the digestate has reached the public highway.

“The Environment Agency is now working with Harper Adams to assess and clean up the site.

“The police and fire services were alerted by the Environment Agency. The fire service is on standby to assist if necessary.

“The police have closed the road to allow work to progress unhindered. Business will continue as normal elsewhere.”

Students had been alerted to the road closure to allow them to take alternative routes and give themselves plenty of time to reach the campus for end of year exams.

It is the second pollution incident involving the AD plant which was built in 2011. This time, though, the failure involves a different part of the facility.

Slurry leaked from a storage tank in February last year. A bund built to contain any leaks also failed, causing digestate to flow on to an adjacent field.