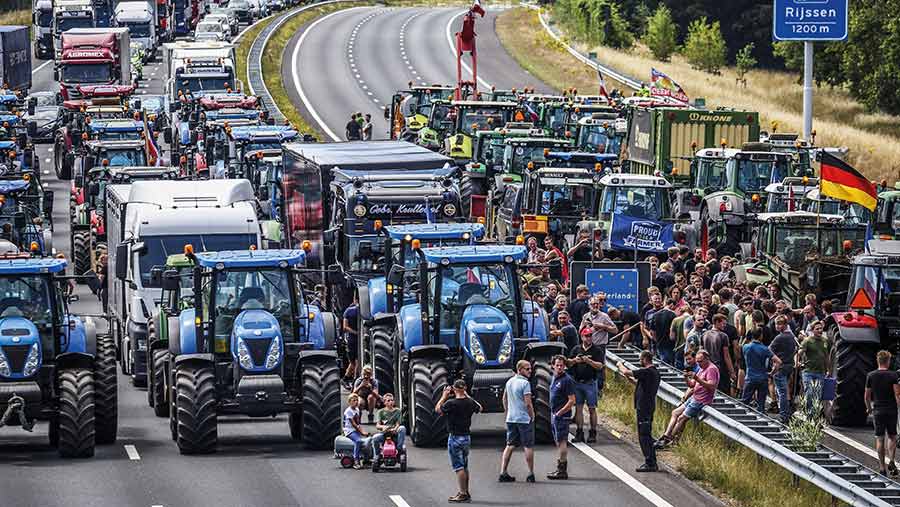 Thousands of farmers in the Netherlands have taken part in protests against Dutch government plans to slash greenhouse gas emissions.

The protestors blocked motorways with columns of slow-moving tractors as farmers descended on the Dutch parliament buildings in The Hague.

Amsterdam and other cities were also brought to a standstill as farmers torched straw bales, spread slurry across streets and let off fireworks, according to the Associated Press. In some cities, dozens of farmers were arrested after violent clashes with police.

Sporadic violence also broke out between police and farmers at the largest rally last week, which drew an estimated 40,000 protesters to the town of Stroe.

The protests coincided with a parliamentary vote on a proposed £22bn programme to halve agricultural emissions of nitrous oxide and ammonia by 2030.

In some areas, close to nature reserves, the policy is tougher still, with 70-95% reductions targeted.

While it will be left to regional governments to decide how to deliver the targets, the fear is that it will result in big cuts in livestock numbers and the shutting down of some farms that cannot comply.

But farming union LTO Nederland (LTO-N) claimed the proposals were a “knee-jerk” response to EU policy and that the effect on Dutch farmers was unfair and understated.

The union believes targets would force the closure of hundreds of farms, causing thousands of job losses in agriculture and its allied industries.

It argues that the Dutch food sector is being unfairly targeted because other EU member states face lesser controls.

LTO-N also highlighted limited reduction targets for other polluting industries such as aviation, construction and transport.

The union has therefore called for a clearer picture of the farming sector’s future amid the proposed reforms.

However, despite the protests, the Dutch coalition government, led by prime minister Mark Rutte’s People’s Party for Freedom and Democracy, approved the proposals.

Following the vote, the Netherlands House of Representatives released a statement which said: “The honest message is that not all farmers will continue in business. Those who do will have to farm differently.”